Madeira ... the quest for Zino's Petrel

Random trip to Portugal and my first Life Birds in quite a while ....

So sometimes you have to do something spontaneous.  My plan for last week was just to chill in East Hampton but, after a mellow weekend I got yanked back to the City for meetings on Monday and Tuesday and rather than head back out for July 4th, I decided I wanted to go somewhere different.  After sifting through the available choices on Monday, I hit the phones and the internet and booked tickets to Madeira hoping to pick up some life birds and in particular ... a Zino's Petrel.

I had the flights and the hotel but no firm birding plans so I stalked the folks at Madeira Windbirds hoping to charter a boat for a pelagic trip and figuring I could also add some endemic land birds over the weekend.  After a few false starts Catarina Fagundes from Windbirds called me back and said they could shuffle their schedule, get me out on a boat (if they could get their hands on 60lbs of fresh chum) and also offered a couple of land bird excursions where I could could join scheduled trips and see all the good species and sub-species on the island.  It sounded good so I wired some money for boats and chum, cancelled the rental car I'd booked and jumped on a plane on Tuesday night.

Settling into the somewhat over-formal Reid's Palace Hotel in Funchal - Churchill hung out there apparently and it looks like they're still dressing for dinner as though they're expecting him to show up at any moment - I took some quiet time before the birding started the next day.  After recovering from my jet-lag on Thursday morning, I joined Catarina and her partner Hugo Romano to get started on the birding on Thursday afternoon, local and endemic land birds were promised, and I was excited to see something new.

So land birds on an island are somewhat limited and Madeira is no exception with just a handful of species, but most of which have evolved into distinct sub-species (and perhaps ultimately species). First stop was the Santa António da Serra area where we quickly got 'Madeiran' Chaffinch, 'Madeiran' Firecrest and the local sub-species of European Robin among other things.  Then after a quick stop for Spanish Sparrow and the local sub-species of Gray Wagtail in Caniçal, we headed over to Ponta de São Lorenço in search of more open country birds.
The grassland community had some interesting birds including a trio of species - Berthelot's Pipit, Plain Swift and Island Canary - which are all endemic to the Atlantic Islands (Madeira, the Canary Islands, etc.).  We also spent some time looking for, and finally found, some Rock Sparrows (Rock Petronia) and saw several of the local race of Eurasian Kestrel (Falco tinnunculus canariensis).  Everything here seems to be diverging in some way. 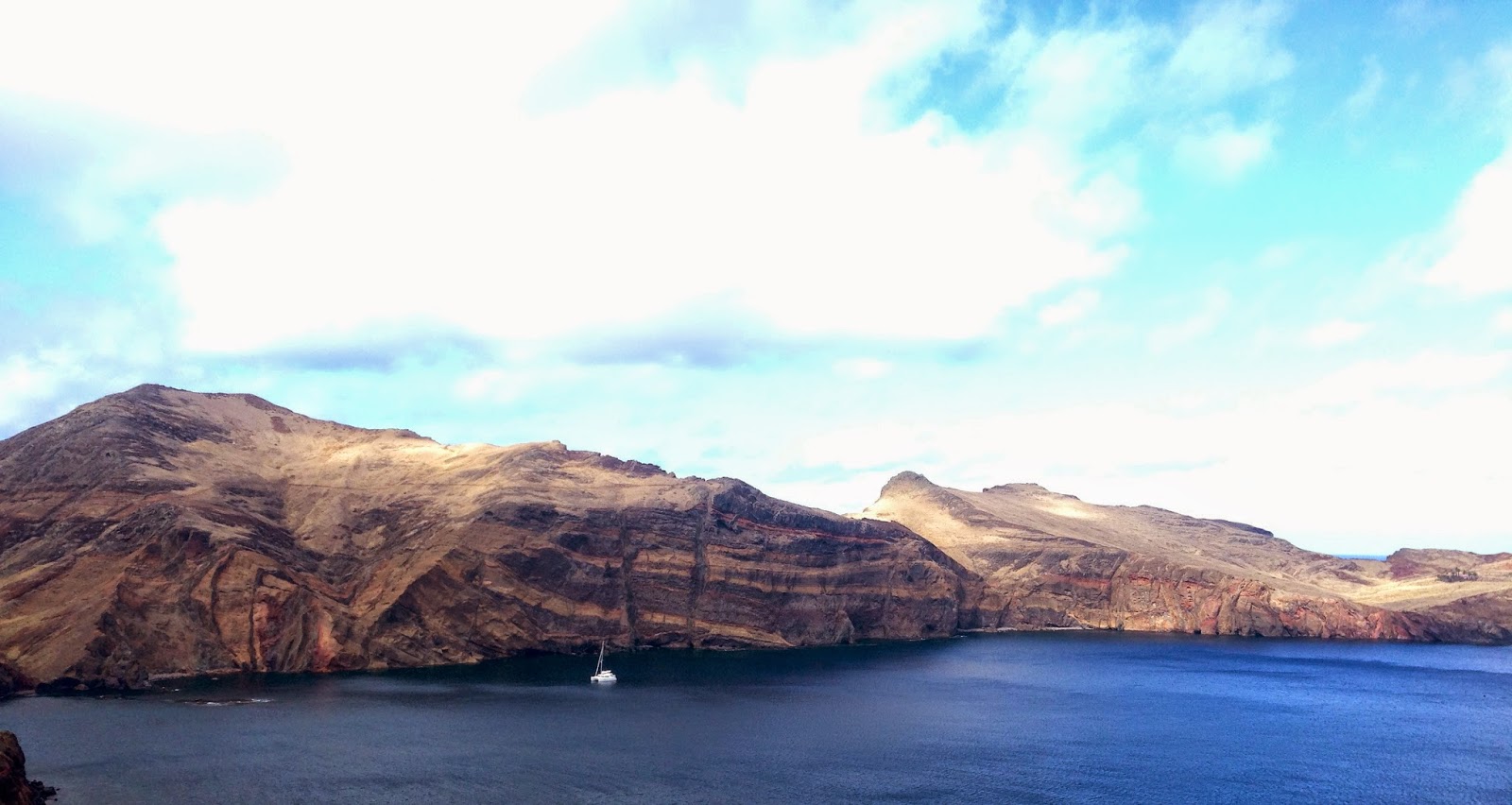 Friday afternoon was Pelagic time! You can see more details on the type of trip that Windbirds offers at Winbirds website along with more pictures, etc. We were heading out in the afternoon hoping to intercept Zino's Petrels as they returned to the island in the evening after feeding offshore all day.  The sea at  Ponta de São Lorenço was deceptively flat but as we cleared 'the channel' and headed out to the North side of the island the waves picked up and we pushed our way out 15 miles through quite choppy seas to an area Catarina knew well before deploying chum and settling in for three long drifts in our chum slick (perhaps 5 hours in the slick - and I didn't throw up, even once!).

The trip out might have been choppy but it was also very birdy.  We passed two large feeding groups of Cory's Shearwaters numbering several hundred birds, the first feeding over a group of Bryde's Whales (pronounced Broo-dah's) and Short-beaked Common Dolphins, the second feeding over a Sei Whale and a group of young Atlantic Spotted Dolphins.  In the mix we also had some Manx Shearwaters and a single FEA'S PETREL (as much as a I wanted a Zino's this bird had a hulking great bill and flew like a Fea's - probably the locally breeding 'desertas' race who's island home was visible in the distance).

Once out in the chum slick we spent the time waiting, waiting, waiting with nothing but BULWER"S PETRELS for company.  We always had a couple in the slick but nothing else came to join them until around 8pm when the sun started to get lower and suddenly Storm-Petrels appeared.  First up was a WHITE-FACED STORM-PETREL which danced it's way up and down the slick for an hour or so, then a visit from a MADEIRAN PETREL (nice to get Band-rumped Storm-Petrel at a breeding island) and then a late EUROPEAN STORM-PETREL.  Not a bad haul of chum birds, but even though we stayed out so late that we ended up coming back to land in complete darkness, we did not luck out with a Zino's .... 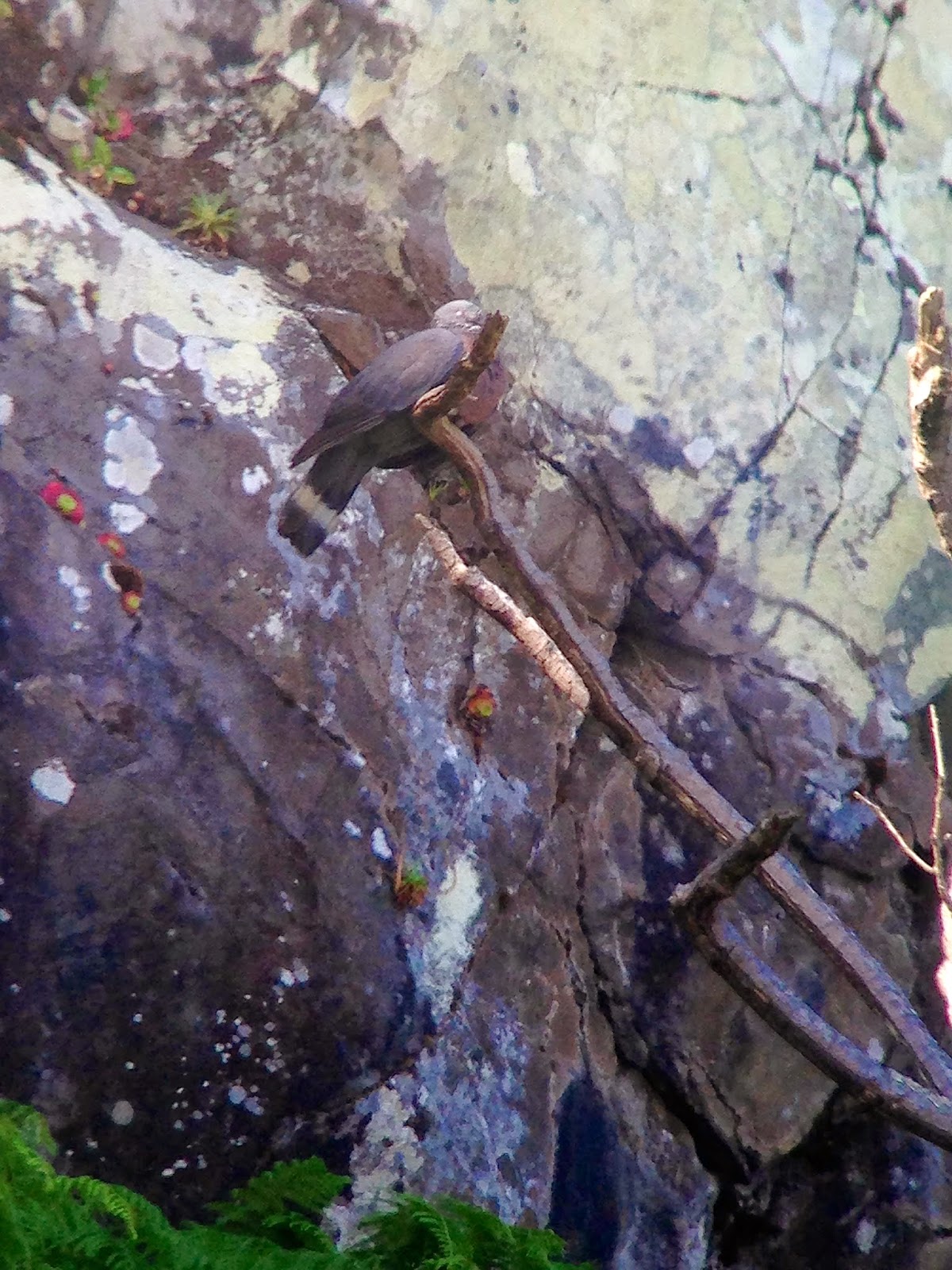 Saturday was a full day looking for land birds.  TROCAZ PIGEON was a life bird for me, the first one in over a year.  I'd expected to have to go to the Laurel forest for them but we went first to a cliff site where we could scope them high on scrubby trees on a relatively sparsely forested slope (although we did see on later at the Laurel Forest site).  An interesting single-island endemic, with perhaps 2,700 birds left on the island (and in the world).

Interestingly it seems that it's ancestor was the Common Wood-Pigeon and that that species apparently arrived and evolved separately on the island on two separate occasions.  The first invasion produced the Trocaz Pigeon, while the second (presumably later) invasion evolved into a distinct sub-species of Wood-Pigeon (Columba palumbus maderensis) which went extinct in the early part of the 20th century.  Who knows, maybe Wood-Pigeon will colonize again (there have been some recent records) and start a third species? Island endemics, and Island Biogeography are endlessly fascinating .... 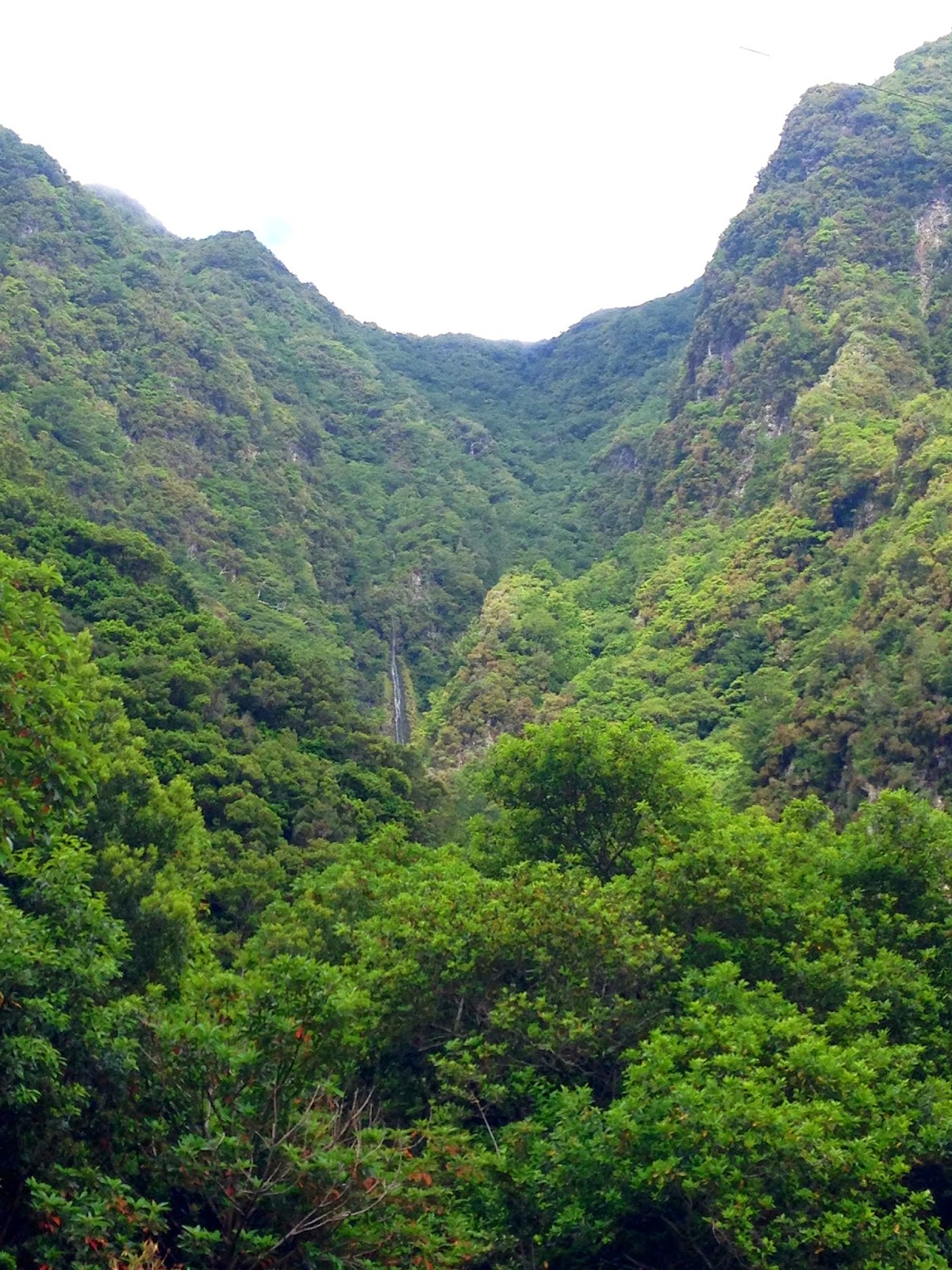 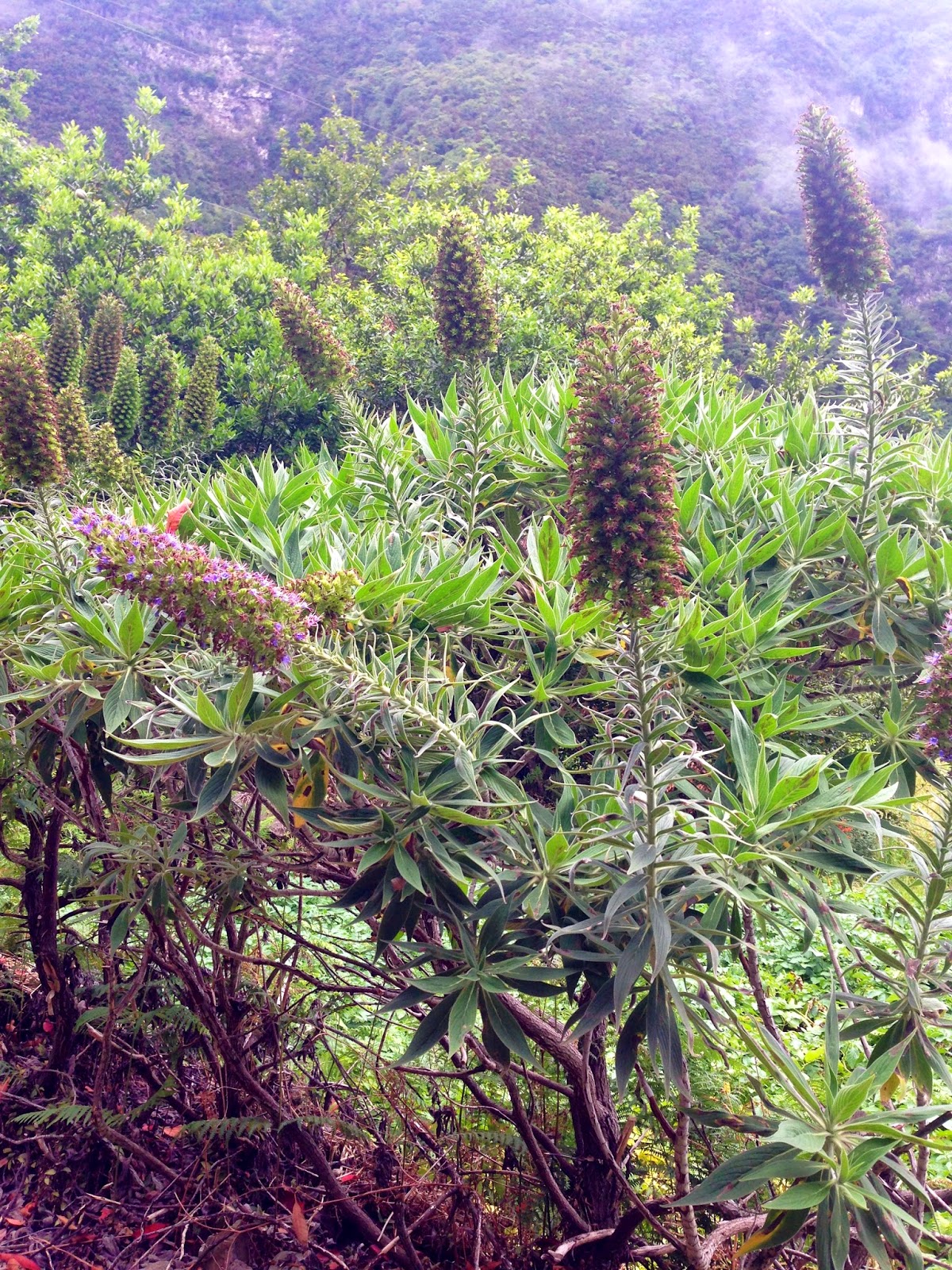 The Laurel Forest habitat was actually pretty cool - green and semi-tropical on an island that up until now had looked pretty arid and brown.  In addition to the laurels there were several species of 'heather' some chest high, some basically small trees.  There were also some unique looking plants like 'Pride of Madeira' (left) which is apparently common as a transplant in California and is actually a great hummingbird plant there.  One local tour company famously even used a photo of this species, complete with feeding hummingbirds, on their local tour brochure.  Who knows, perhaps next time I come I'll bring a box of Black-chinned Hummingbirds, I'm sure they'd do well here (kidding).

There is also apparently and endemic dragonfly, no doubt some endemic butterflies, etc. and for a while I was wishing I had more time to explore the non-vertebrates on the island.  I did see a lot of the endemic Madeiran Wall-Lizard (Lacerta dugesii) though so at least I got one new non-bird for the Life List.

The afternoon saw us birding at Ponta do Pargo, again a grassland area where we added Pallid Swift, Red-legged Partridge, several calling Common Quail and the local sub-species of Spectacled Warbler (orbitalis) and Common Buzzard (harterti).  Then after a quick stop for Common Waxbills it was time to go back to the hotel for dinner and a nap before round two with the Zino's Petrels - if the Zino's wouldn't come to me, then I'd have to go to the Zino's .... 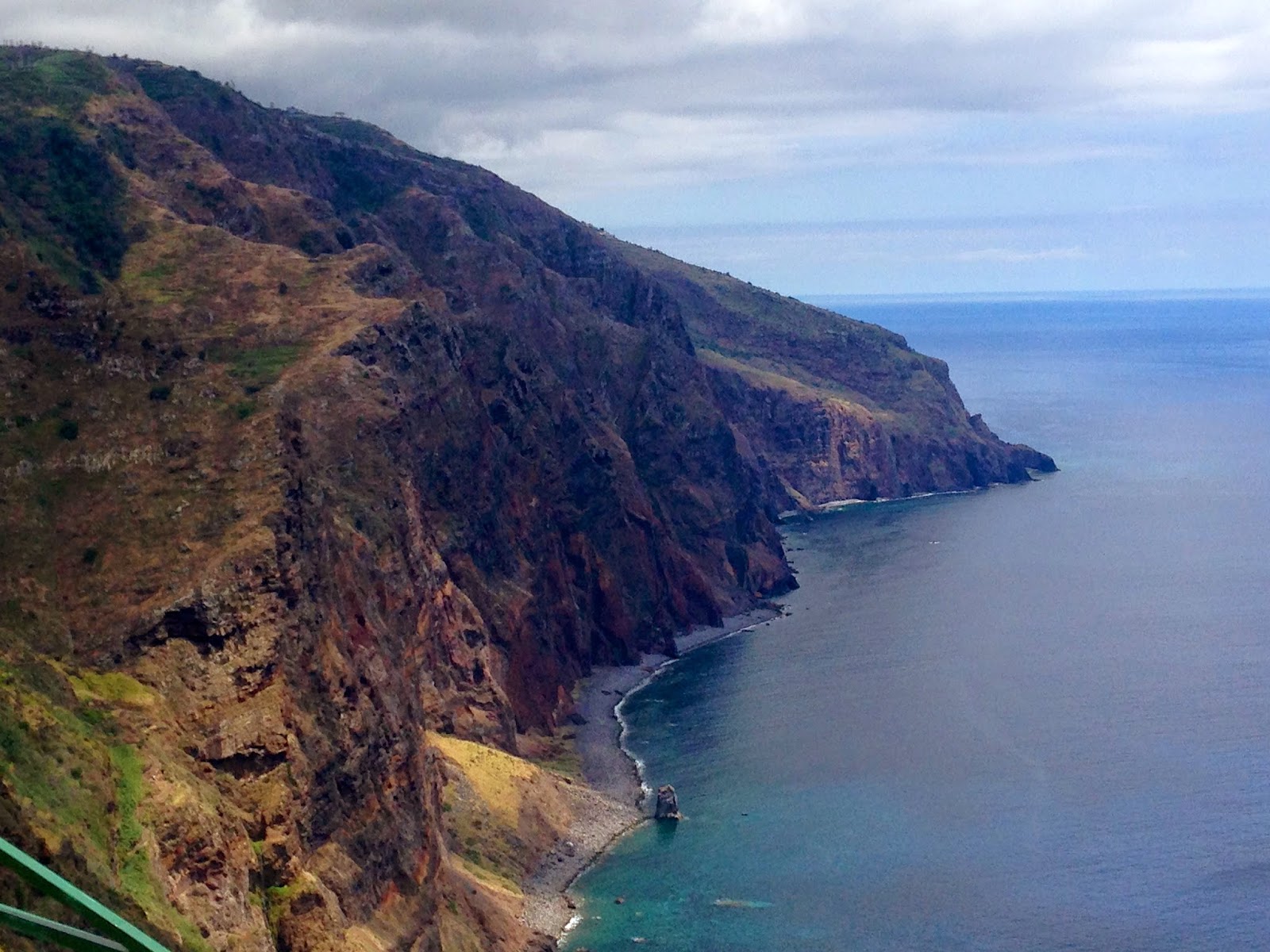 Back in the van at 9:30pm for a drive to the Pico do Arieiro - jagged mountain tops 6,000 feet above sea level and well above cloud level that night.  Once we cleared the clouds we were presented with a truly awesome sight, ragged mountain peaks floating above the island under a sea of stars and bathed in silver moonlight.  Truly quite an awesome place to go look for birds.  Hugo and Catarina offer the Windbirds Night Trip for Zino's Petrel during the breeding season and, as it was my best and only chance to actually see one, we were soon hiking off along steep moonlit trails along the mountain tops to one of the few known breeding colonies of this rare seabird. 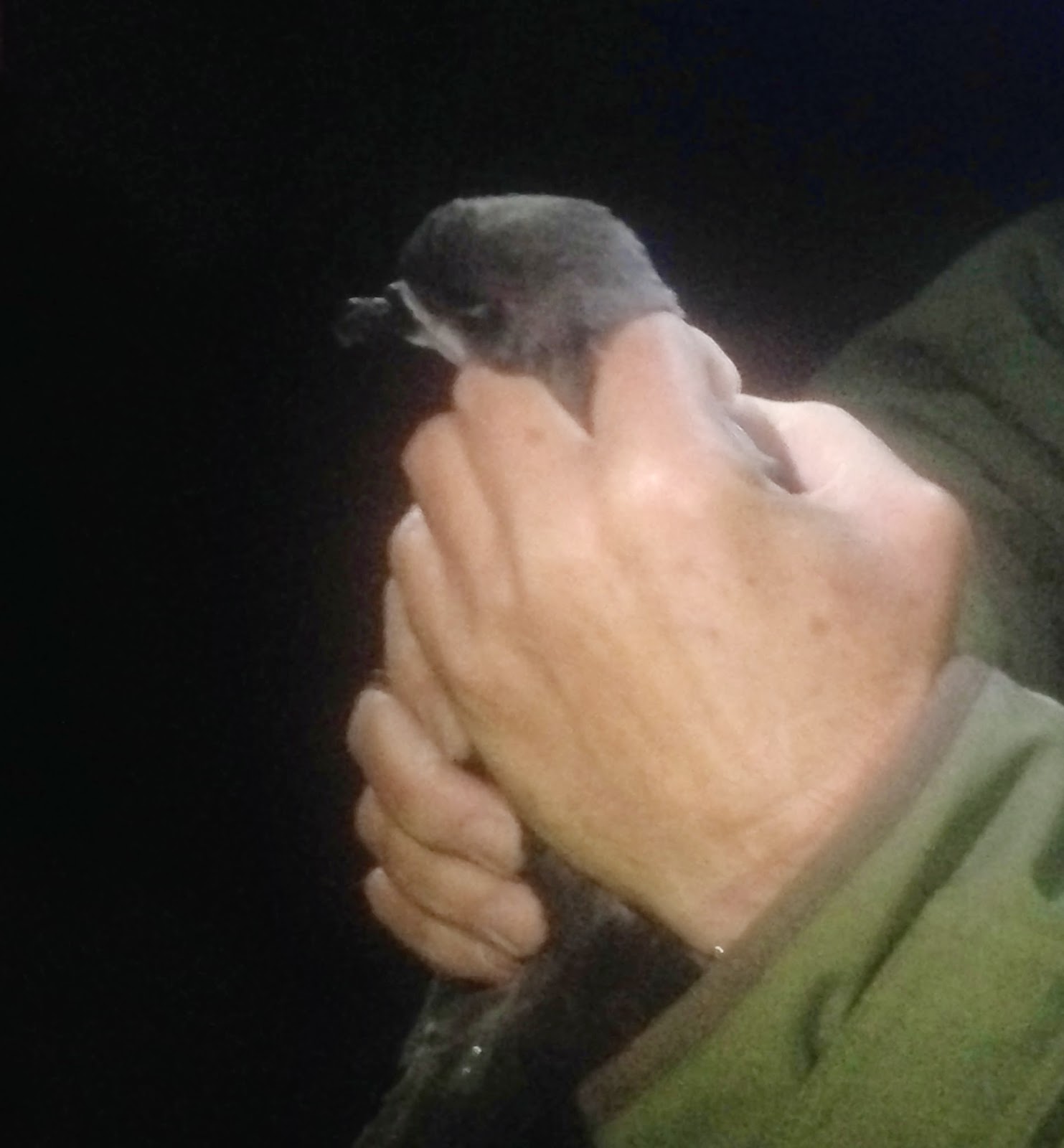 By 11pm we were set up on a razorback ridge line with steep cliffs descending vertically into the clouds on either side of a narrow trail.  Sitting quietly we'd been told that the birds would come in to exchange incubation duties at nest burrows on the cliffs below us and that we might hear and see some.  Sure enough, not long afterwards we heard a 'whooshing' sound as a bird passed over us in the darkness (the breeders apparently go silently to the nest burrows) followed by the eery calls of several Zino's flying around us (non-breeders visit the colony at night and make lots of noise).  Putting the moon to our backs we were able to see the birds, firstly ghost-like silhouettes, but when they came close and caught the moon light, we could actually see what they were.  Perhaps  half a dozen or more birds kiting around, sometimes in close formation, skimming the cliff edges and blasting by within feet of us as we stood still on the trail.  In minutes, Zino's Petrel went from 'most wanted lifer' to 'heard only' to 'not-quite tick-able views' on the hierarchy of 'not quite on the life list'.  Notwithstanding the rules of World Listing though, it was an awesome experience to be there in such an mid blowing place with this incredibly enigmatic species wheeling and wailing around us.

As luck would have it though, we weren't done yet.  It turns out that we weren't alone on the mountain that night and as we came back up towards the parking lot (several hundred steep steps that were a bit easier going down earlier) we bumped into some researchers who were trying to band and radio-tag petrels.  We'd left them alone earlier but, as they were packing up for the night, we went over to talk, and just as they were taking their nets down, a petrel flew into the mist net (!).  Once they'd processed the bird, they were kind enough to let us see one in the hand - truly an honor - sometimes life just works out perfectly.  And yes, based on what I'd seen so far that night, and seeing this bird go into the net, I did add ZINO'S PETREL to my life list.  One of the best natural history experiences I've had in years.

Back at the hotel - and watching a Barn Owl hunting around the hotel grounds at 2:30am - I had a chance to reflect on the trip.  Very glad I came, a truly wonderful break and great experience - even if they do speak Brazilian poorly here.  Hugo and Catarina are real pros and highly recommended.  Definitely a weekend trip to consider if you find yourself in range of Madeira (it's only 12 hours from New York!).
Posted by Welsh Birder Abroad at 11:57 AM No comments: