Fall Migrants and Vagrants in New York, including an *Mega* Rarity

October was a terrible birding month.  After the excitement of the Lark Bunting and the Brown Booby in September, I basically saw nothing very interesting in October.  Not that I didn't go out; I spent three weekends birding on Long Island and saw, well very little of note.  So on to November, the traditional time for rarities and surprises .... and I was feeling that I could really use a couple of both ....

Friday night, and after the boredom of October birding on Long Island I was looking for something else to do.  Should I spend Saturday hoping that the New Jersey Common Greenshank was still around, even though it hadn't been seen for a few days?  Should I do a ludicrous 15-hour round-trip drive to Niagara Falls for a recently reported Sabine's Gull (a New York State bird for me)?  In the end, I got up late (6am) and made do with another trip to Long Island.  This time though, at least there were some birds.

First stop was Heckscher State Park, where a nice range of late migrant shorebirds had been reported during the week.  My main target was Hudsonian Godwit, a Suffolk County bird for me and sure enough I pulled up to the puddles in the parking lot and immediately saw three of them feeding there along with a nice selection of other shorebirds and ducks. 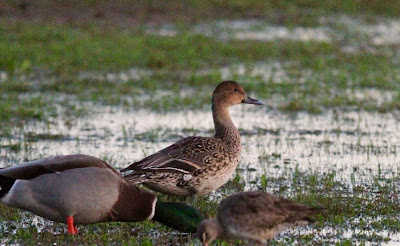 Wondering what to do next, I decided to push further East and ended up birding for a couple of hours along Dune Road in Hampton Bays.  Nothing too amazing here but lots of birds ... Peregrine Falcons, Merlins, returning Common Eiders, Sharp-tailed Sparrows, the change of seasons was very obvious and the weather was clean, bright and autumnally crisp.  A very refreshing place to spend the middle of the day, in fact I was really liking this birding thing again.  I was having so much fun in fact that I though about going on the East Hampton to stay the night and bird Sunday Out East as well.  In the end though, the lure of the Sabine's Gull got the better of me and I doubled back to the City, stopping at Seatuck Creek (and finding a Eurasian Wigeon) and at Orchard Beach in the Bronx for a Black-headed Gull. 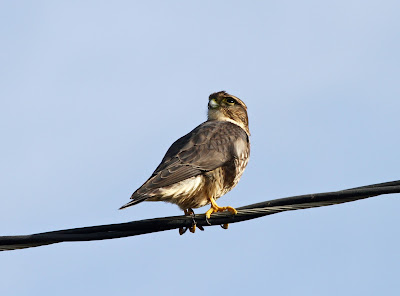 When I got home on Saturday night I saw that the Sabine's Gull at Niagara Falls had been seen again during the day, and so decided to give in and follow my instincts and try to see it.  I ordered the car for 3am, texted Greg Lawrence for advice and then, when he said he wanted to tag along, made plans to meet him near Rochester the next morning.

By 3:15am I was on the road.  I picked up Greg at around 9:30am near Rochester and we arrived at Niagara Falls by 10:45am .... easy!  I had good directions for local expert Willie D'Anna, who's partner Betsy Potter has found the bird a few day earlier, so we went straight to Goat Island then walked down the steps to the Luna Island observation platform perched right on top of the American Falls.  Here we took our place among the tourist but while they were all taking selfies with the falls in the background, we were staring straight down into the churn of water, foam, mist and shattered rocks at the bottom of the falls, the place where the gulls feed.

Lot of Bonaparte's Gulls... thousands of Bonaparte's Gulls ... then a Little Gull .... then after a half hour of scanning the Bonaparte's Gulls, Greg picked out the SABINE'S GULL (NYS #399).  What a beautiful bird, and a New York State life bird.  Not an easy bird to find in New York, they migrate through in small numbers but rarely stick around, so a bird that could be chased was a rare thing indeed.  That was in part why this particular bird had haunted me all week, and even though it was far away in terms of hours driven, I was glad that I went to see it. 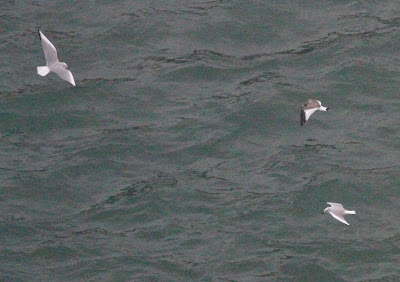 So I felt pretty good, and even though we failed in an attempt to add a Franklin's Gull in Buffalo later,  and even though I had to drive for 7+ hours to get home (and it rained all the way), I came home happy and feeling accomplished.  How could I possible top that, even though Greg had said something that stuck in my mind ... "November is when all the weird rarities show up" he said ... so may be there was a chance of another new bird.  But what could top a Sabine's Gull?

I felt like crap all morning.  I was sick with something and not feeling at all well, even throwing up a couple of times at the office.  By noon I decided to take the afternoon off and headed toward the apartment only to check messages on the subway and see one from Anders Peltomaa asking for a ride to the Corn Crake if I was going .... CORN CRAKE!!!!! What the hell ...

I jumped across into the birding listserves and sure enough, Ken Feustel had found a Corn Crake in Suffolk County (my home county) that morning.  As unwell as I felt, I knew I was going to go for it so I ran home, went up to the apartment, made a bathroom stop, grabbed the camera, made another bathroom stop, jumped in the car and headed out.

There has not been a chaseable Corn Crake in North America .... ever!  The last record from New York State was 60 (!) years ago, and the one before that was 75 years earlier.  The two recent records in Eastern North American were of a bird killed by a cat, and a bird mis-identified and only correctly re-identified from photographs several years later.  This is now a rare bird in Europe where they normally live, and there were basically only two living North American birders who had it on their US list ... until today ....

The drive out was short (in reality) and endless (in my head), not helped by my feeling terrible and coughing and spluttering all the way there.   When I finally reached the spot, parked and rushed over to the gathered birders, Isaac Grant told me that the bird has been visible but had been spooked by a car and vanished into the undergrowth ..... argh!!!!

So the next 10-15 minutes were, shall we say, tense .... there's nothing quite like standing with  group of birders who've seen a rare bird and are chatting away about how wonderful it was, when you haven't yet seen the bird (!).  But my luck help up and before long, the bird nonchalantly wandered back out onto the grass verge and unleashed a storm of shutter sounds from the gathered birding paparazzi.  CORN CRAKE .... NYS (#400) .... amazing.  Then I drove home and passed out, seriously worried that I might have pneumonia ... I was gone for only a couple of hours ... but I now have Corn Crake on my New York State list, so if I die, I'll die happy! 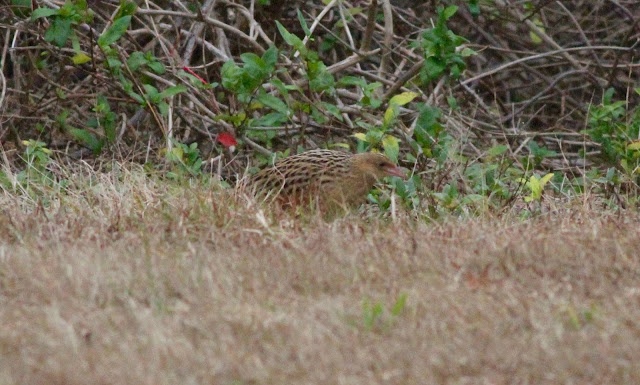 After spending the Thanksgiving Weekend in Montreal, I got back to New York on Sunday night to hear chatter about a potential Hammond's Flycatcher in Central Park, incredibly right in the same area that had hosted a Pacific-Slope Flycatcher a few years earlier.  So up at dawn and into the park where I joined a small group of birders and got but a fleeting glimpse of a bird that looked good but didn't stick around for photos, before I had to go to head to the office for work.  Luckily though I had a light schedule so planned a long lunch and headed back to the park where a large crowd of birders had now gathered and I got much better views of another New York State bird for my list ... HAMMOND'S FLYCATCHER (#401).

Luckily Hammond's Flycatcher are a great deal easier to identify than Pacific-Slope / Cordilleran Flycatchers so the ID was quickly established.  This was only the 3rd record of the species for New York State though, so a great bird, and one has to wonder what we miss every year in areas that get a lot less birding attention than Central Park.  November really had produced some good birds, including a trio of New York State birds for me, and so on to December with thoughts starting to turn to new adventures in 2018.

Posted by Welsh Birder Abroad at 6:31 PM No comments: