Birding today with Corey Finger and Carlos Sanchez who was visiting from Florida.  Started out at Jamaica Bay, and while things started slow, it ended up being a pretty solid day.

Started late and caught up with Carlos and Corey a fair way up the East Pond.  They hadn't seen much of note and were generally belly-aching about the lack of decent birds.  There were a group of CASPIAN TERNS on the Pond (a bird I'd only added to my Queens list a few weeks before) but not much in the way of good shorebirds.

Turning around though, we started to add a few good birds on the way back South, including a couple of close STILT SANDPIPERS, and few WESTERN SANDPIPERS and then a really interesting BARID'S SANDPIPER.  This last bird was an ABA bird for Carlos (he'd seen them before only in Ecuador) so his mood was transformed.  The bird also seemed to be injured and only has one eye, making us wonder how it was going to make it down to Argentina.  Out concerns were well founded it turns out as we heard later that the bird was caught at eaten by a pair of hunting Peregrines not long after we left. 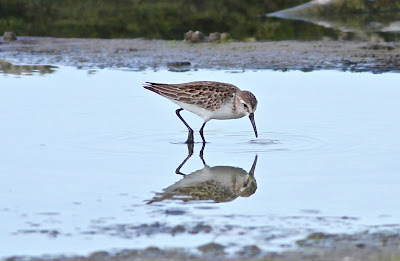 After Jamaica Bay, we hit Jones Beach then rushed out to Riverhead, hoping to catch up on all the grassland shorebirds that had been seen regularly the week or so before.  Unfortunately, they all seemed to have left the area for points South so we gave in, parted ways and Carlos and I headed out to East Hampton to join friends if mine for an amazing dinner in Sag Harbor (who doesn't like Portuguese Seafood Stew?).

A very pleasant morning birding some of the hotspots in The Hamptons.  Late Least Terns, lots of Royal Terns, Saltmarsh Sparrow, and Clapper Rails all made for a good morning.  Bird of the day however was a migrant SORA, Suffolk County Bird number 315 for me (and day you get a County Bird in your home county is a good day!).  Then back to the City to pack Carlos off to warmer climes for the Winter.

While we were on Long Island, as inevitably happens, a good bird was found (or in this case re-found) upstate.  A BROWN BOOBY was pinned down on Cayuga Lake and, anyone who knows me knows that this species if fast becoming my New York State Bogey/Nemesis Bird.  So, with a quiet calendar, and daily sightings of the bird, I took a day off on Friday and drove 5 hours to Cayuga Lake to try to get it.  I was so confident of getting this bird - which had been sitting on a particular favorite buoy ever day - that I made plans to do some county birding on the way back, hoping to fill in some white spaces on my eBird profile.  Needless to say though, that twitches to Upstate New York are not really my fiends and, after spending the whole day scanning buoys on the lake, I dipped and had another 5 hour drive to savor my failure and shame.

p.s. the bird was of course seen the next day at a new location further down the lake and has been seen sporadically since.  Of course ....