The Quest for the Spectacled Bear

Two days in the Andes around Quito looking for one of my 'Bucket-List' mammals.

Ecuador was the first country I visited in South American, way back in 1994,  I did a 'classic' two week Quito-Guayaquil trip with Steve N.G. Howell, a childhood friend from Wales, hitting all the best knowns spots in the Quito area then driving down to the Pacific and birding along the coast.  Six years later I went back, also with Steve, and spent a week in the Eastern Andes and a week in the Amazonian lowlands at Yuturi Lodge.  Then somehow it took me 20 years before I got back for my third trip ....

The plan was to join Mitch Lysinger and his Field Guides group for a week of birding in the very SouthEast of Ecuador, a trip anchored in a visit to the Maycu Reserve with the hope of seeing Orange-throated Tanager.  The tanager is a bit of a star bird, and historical border disputes in it's limited range, along with heavy military presence, had made it a very difficult bird to see until recently.  For me though, the trip was a bit of a 'low effort' thing ... the schedule worked with mine, the price was right, and I had met Mitch before and liked him.  This was really meant to be a quick trip before a series of more extensive, expensive private trips and rarity chasing in Brazil ... little did I know at the time that COVID was about to change everything and it would be my last overseas birding trip for 18 months.

I arrived a few days early in Quito, planning for another quest before joining the Field Guides trip.  I had something I wanted to do ... to look for and see a Spectacled Bear, one of a number of big, charismatic, South American mammals that I'd never been lucky enough to bump into.  I'd recently made a bit of a 'bucket list' of most-wanted neotropical megafauna and planned to pay more attention to opportunities to see them ... I'd seen Maned Wolf, Giant Anteater, Giant Otter and Brazilian Tapir but not yet bumped into Jaguar, Puma, Pink River Dolphin, or Spectacled Bear).  On this trip, I'd have two days to try; one on my own with a local guide, and one with some of the Field Guides participants arriving early to bird (or bear) in the mountains around Quito before the trip got underway.   Given the local intel and recent sightings I was feeling pretty good about finally getting Spectacled Bear for the mammal list.

An early start from the hotel and we were off up the mountains to the South of Quito and towards the giant volcanoes of Cotapaxi and Antisana.  The Reserva Antisana wasn't even a publicly accessible area last time I was in Ecuador but had since been brought out of private ownership and opened up a huge area of paramo and related habitat that was now easy to access via a network of roads.  Our first destination was Restaurante Tambo Condor in the adjacent Reserva Antisanilla ... which despite the name does not actually serve condor-dishes but rather serves carcasses to the Andean Condors, part of local conservation efforts to bolster this spectacular but sadly declining species.

Pulling over near a small farm, we entered a field and walked to an observation platform from where we could look across the valley towards the condor feeding area.  From here we could also scan a lot of habitat and the guide assured me it was our best chance to see a bear.  The first things we saw though were hummingbirds, mostly old friends; Tyrian Metaltails, Sparkling Violetears, Black-tailed Trainbearers and a spiffy Shining Sunbeam.  There was also a cooperative Giant Hummingbird, a species really pushing the limits of just how big you can be and still hover, and so I had plenty to keep me occupied while we scanned the distant hillsides.  There was in fact a Condor, a huge black and while lump looking tiny in the distance across the valley, but there was no bear.

So onwards and upwards we went onto the altiplano, a vast, tundra-like plain that spread out around the base of the volcanoes and stretched off miles in all directions.  The birds here were all familiar, and mostly, well, brown.  That didn't mean they lacked charm though and many of them I hadn't seen in years so I really enjoyed catching up with them and even getting a few photos. 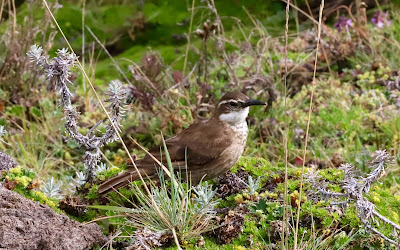 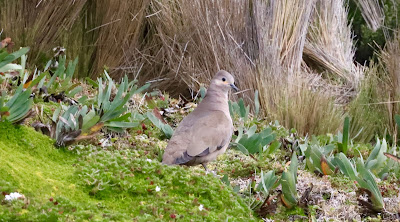 The most obvious birds were perhaps various cinclodes and the patrolling Carunculated Caracaras, but there were also Sedge Wrens (split coming soon), Many-striped Canasteros, Andean-Tit-Spinetails and all manner of small skulking brown jobs lurking in the low vegetation.  The oddest bird of the day though was one you really don't expect to find of vast treeless plains despite it being common and widespread across a huge range encompassing North and South America.  Flushing a Great Horned Owl (a species that breeds near my garden in New York) underfoot in low scrub while stalking Tawny Antpittas was a bit of shock and provided a moment of excitement for us both ... the bird flew to a nearby bank and glowered at us.  Well it wasn't a bear, but at least it was a predator. 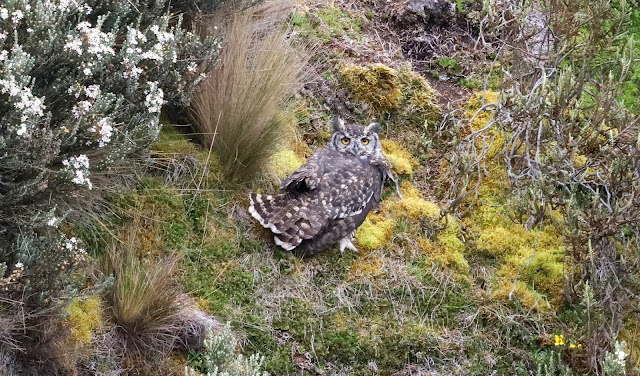 Too soon though it was time to retrace our steps and, even though we spend several more hours scanning likely habitats, there were to be no bears today.  Back to Quito for me, another night in a nice hotel, and 'Round 2' with the bears tomorrow.

A more civilized start today and it took a little longer for the group to get organized and underway.  I'd reconnected with Mitch Lysinger, an American Bird-Tour Leader who's been living in Ecuador for many years, the night before and met some of the tour participants.  Some had spent the day birding the Mindo Road and so had already seen a lot of birds and even a Tayra, and all were excited to go up into the higher altitude of the 'Andes proper' today.

The 3,300m altitude of Papallacta Pass sounds impressive, but when you're already at 2,800m in Quito, it wasn't really that much more altitude to gain and soon enough we came out of the farmland that surrounds the city and emerged into the higher level grasslands and paramo at the pass.  The birds here were similar to what I'd seen yesterday, but then I wasn't here for the birds and I spent every moment diligently scanning the hillsides for black lumps that might be bears.  The morning session though yielded some look-like rocks and tree-stumps but nothing that could have been a living spectacled bear.  Luck just wasn't with me on the bear front.

After a few hours in the higher country, we dropped down the East Slope of the Andes and spent several hours birding, and had lunch at, Guango Lodge.  This lovely little roadside property had a nice mix of habitat and a very impressive array of hummingbird feeders so I spent a very pleasant time soaking up the hummingbirds ... no-where does hummingbirds like the Andes. 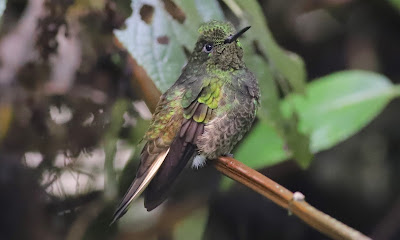 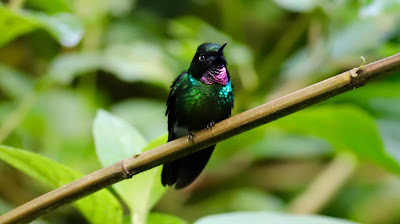 Eventually though it was time to tear ourselves away and with our timing drawing to a close, we turned around and started heading back to Quito and our flight to the South.  This was after all just a 'pre-trip' and 'buffer day' and the main targets of our tour lay a plane ride away.  I was, to be honest, just a little in shock that I could bird hard for two days in Ecuador and not get a single lifer but I suppose, after a certain point, it gets harder everywhere and I had visited similar habitats several times before.  Still, I really enjoyed catching up with some birds I hadn't seen in many year and there's no such thing as a bad day of birding.

Starting the descent from the pass down towards Quito, we passed through a wide valley with extensive grassy slopes and a few scattered patches of scrub stretching out above us on both sides of the road.  From any given point here it was possible to see a huge area of grassland and so Mitch suggested we stop a few times on the way down to 'scope for bears'.  Now, after all the trips I've taken, I'm wise to the ways of leaders, those masters of suggesting the possible to keep people engaged, excited and interested on long drives, and so to be honest I had low expectations.  But I appreciated that Mitch remembered my desire for a bear and was willing to keep trying even if I figured the chances were extremely low in a place like this.

A mile or two later we pulled off the road and all got out to scan the slopes across the valley.  There was, between eight of us, only one scope and so other than Mitch, we were all scanning at long range with bins.  It was all very relaxed until Mitch, staring through his scope, casual announced "I've got a bear".  Then suddenly it wasn't quite so relaxed any more and we scrambled to form a line behind the scope for our 'first looks' (in group birding, once everyone in a group has had a quick 'first look' you can go back for more leisurely 'second looks' knowing that everyone has seen the bird, I mean bear).  I was second or third on line and put my eye to the scope for literally a three second 'first look' but right there, in the center of the field of view, was a big, shaggy, white chested, black bear with tufty ears.  The SPECTACLED BEAR, exactly as I'd imagined it (only half a mile away on the other side of the valley) walking towards us in long grass.  I stepped back, allowed the next person on line to get on the scope, and paused to burn the brief image into my memory ... what an awesome animal.  That euphoric feeling of seeing a long sought target started to swell up in me and I was practically bouncing with a sense of well-being and accomplishment, what a great day.

The next person on line also saw the bear and then the great beast seemed to lumber behind a low ridge.  Mitch gave us rough directions to the sighting and we all scanned with bins, confident that the bear would emerge again, perhaps even closer.  When it didn't, we jumped on the bus and rolled a quarter mile downhill to what we all expected to be a better vantage point, leaping out and starting to scan ... no bear.  Remembering that not everyone had seen the bear, the mood turned tense and we all worked hard to try to re-find it.  How could we lose a great big lump of black-and-white mammal in a background of largely sand-colored grass?  But lose it we had, and despite a diligent search we never did re-find it.

On the ride back to the hotel, I was of course jubilant but had to hide it with people on board who had missed the bear's brief appearance.  Luckily, they seemed to be good sports, or just not that troubled by missing the animal (I think most were on their first trip to Ecuador and had had many lifer birds already that day) but still, the celebrations were a bit muted.  I was a very happy naturalist though ... I might not have had any new birds but I had a life mammal, and a star one.  Now it was time to head South for a new mission, to see if I could find my 5,000th species of bird.

Posted by Welsh Birder Abroad at 3:39 PM No comments: