One of the truisms of birding is that the more you look the more you see, and conversely, if you don't go birding you don't see very much.  Recently my schedule has kept me tied to the City with occasional trips to East Hampton and, not-surprisingly, I've ended up missing some good birds as a result.

On May 16th Shai Mitra and Pat Lindsay found a BAR-TAILED GODWIT at Jamaica Bay (and not the bird previously reported from New Jersey).  They stumbled into the bird right next to the main trail on the West Pond and got the word out quickly allowing a handful of first responders to get distant looks at the bird before it flew off a short-time later (other birders were still en route and missed it).  I had birded the morning in Central Park and then headed to the office, getting word of the bird's arrival and departure simultaneously when I checked my email in the afternoon.  It would have been an ABA bird for me so I spent 7 hours there the next day, birding the rising tide in the hope of a repeat performance, but lightening did not strike twice.

The next week, during the week, a LITTLE EGRET was found at Gardiner County Park in Suffolk County.  Another potential ABA bird but this time I knew I had no chance of chasing it until Sunday - a combination of work and house guests meant that I couldn't possibly get away until that day so nothing to do except hope that the bird stuck around.  The signs were good when the egret remained loyal to the same site a second day but, perhaps inevitably, it didn't stick around for the weekend (as least as far as we know).

My consolation that weekend was some nice local birding, enjoying breeding birds and some late migrants near my house in NorthWest Harbor.  I did see breeding Least Terns and Piping Plovers with young, the full-suite of 30-or-so species that breed in and around the yard, and two new birds for my yard list, a WHITE-CROWNED SPARROW and a surprise BROAD-WINGED HAWK.  Very pleasant local stuff and for the record I did, as always, check each of the 5 Snowy Egrets at the local marsh very carefully .... 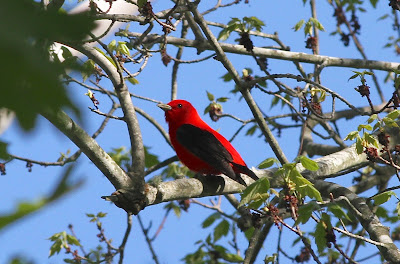 Convinced that my bad luck had settled in, I really debated whether I should chase the next good bird that came along.  When Deborah Allen found a FRANKLIN'S GULL at Plum Beach in Brooklyn this week I wondered if I'd even try to go and see it, especially after my 5 failed attempts at the Mew Gull in Brooklyn this Winter.  The signs looked better for this one though as the Franklin's Gull seemed to have paired with a Laughing Gull and was being seen regularly during the week.  Plus I'd seen the species before in New York State - a good bird but not one I desperately needed so I figured my chances might be better. 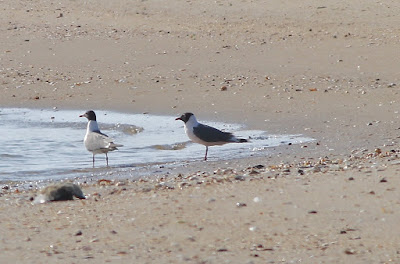 As it turned out, this twitch was easy.  I walked up to the site, saw a group of birders with scopes, walked over and was soon on the bird.  It was a bit distant for good photos but I was able to grab a few record shots and had a nice chance to study Laughing and Franklin's Gulls side by side.  All very pleasant, and even though it took me over an hour to drive the 5 miles back to the City (gotta love New York in Summer), it was a nice trip and hopefully a sign that my luck is turning.


My photos were distant and not really very good but for some better photos check out Andrew Baksh's blog post here.
Posted by Welsh Birder Abroad at 6:46 PM No comments:

If you don't know Ocean Search then you should really check it out.

So the movie Jaws introduced us to the idea that Great White Sharks live on the US East Coast but the fishermen and other nature folks have now this for generations.  Unfortunately the history of sharks on the East Coast is more than a little bit one sided ... we killed them ... and continue to kill them ... in large numbers.  Montauk in particular was, and is, a center of shark slaughter ... sickening photos of sad little men standing next to dead sharks are still on display every week, even today.  But there is a bit of a bright spot ... the folks at Oceansearch have been tagging and tracking sharks on the East Coast and have started the long, slow, process of changing their image from Man-Killers to the amazing complex creatures that they are.

Recently the New York Post (our local Rupert Murdoch owned tabloid) ran a story about about the shark above ... transformed of course into a 'man-eater' headed to New York (Everybody panic!  Think of the children!).  The reality of course is that Great Whites are part of New York's ecosystem and have always been just off-shore (conspicuously not eating surfers and bathers for hundreds of years as it turns out).  Maybe if we get to know them a little better we can start turning the PR around.  Check out the Oceansearch Website ... we really need to help these incredible creatures with their image and build the number of people demanding better protection for shark species.

I also saw a great story today featuring a Tiger Shark ... a BIG Tiger Shark.  I sort-of conceptually know that they are 'out there' off the East Coast but have never seen one. 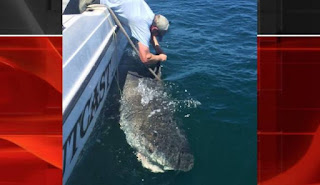 This was a pretty big Tiger Shark captured and (mercifully) tagged off the Carolinas recently (See story here).  No doubt we'll see this tagged shark cruise the beaches of the East Coast over the coming months and again, not eating our children.

The website also has links to tagged Mako and Blue Sharks.  Makos in particular being over-fished by "sport" fishermen (why does killing a shark seem to be a substitute for manhood for some sad people?).

So check it out.  The more people are aware, the better the chances of conserving out apex marine predators.  Sharks in general could use a lot of PR help and this may be a start.


Posted by Welsh Birder Abroad at 5:21 PM No comments:

It's been a 'bitty' Spring with little time off but a few good days here and there.  Slowly filling out the year list though and adding a few decent species here and there.

Saturday, May 3rd
Had a choice to make today - chase a (lifer) SMITH'S LONGSPUR in Connecticut or an ABA bird BAR-TAILED GODWIT in New Jersey.  I chose wrong.  Spent a pleasant few hours watching robins and song sparrows on a soccer field in Connecticut, but the Longspur was long gone.  Running errands on Long Island later, I was at least able to add a couple of Blue Grosbeaks - small consolation but a good bird nevertheless.
Sunday, May 10th
So after a birdless day in Central Park on Saturday I decided to go North and chase the warblers on their breeding grounds .... and I was very glad I did.  Ended the day in Putnam, Orange, and Rockland Counties with 21 species of warblers including Golden-winged, Tennessee, Hooded, Cerulean and Kentucky Warblers.  Hit Doodletown Road, Sterling Forest State Park and a side trip to Blue Chips Farm where I dipped Upland Sandpiper.  In addition to the warblers I got a WOOD TURTLE a Box Turtle and some lizards.   Very nice day out in the country.

Doodletown Road is the most amazing place and I had a bizarrely interesting birding experience birding it today.  As I started up the trail I ended up in synch with a Mennonite (?) family (my best guess based on the attire the women were wearing).  One of the three teenagers in the group had serious birding skills and great ears and eyes.  He was calling birds (correctly) left right and center - and where I could add or correct him, it was based on experience rather than skills.  Clearly not someone connected to the birding community, but this kid had promise. Hope he gets to develop his talents. 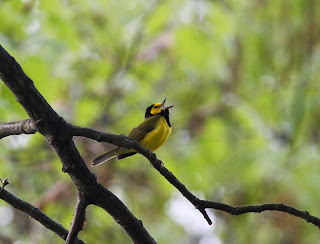 Once again though I managed to miss the best non birds seen that day.  Others saw a TIMBER RATTLESNAKE (this is a great spot of them but I never see them) and a BLACK BEAR.  One day I'll see the rattlesnakes - they are apparently always there but my timing always seems to be off.  Will just have to keep going until I see one I guess.

Tuesday, May 12th
Did a Long Island run with Nathan Remold, a visiting Cornell/Chicago birder.

Started at Jamaica Bay where we got an incredible 84 species - lots of coastal birds and lots of migrants, including Orchard Oriole, both Cuckoos, Lincoln's Sparrow, etc.  We also got some good costal birds and nice mix of Spring shorebirds.

Later stops included Dune Road in Quogue where we got Nathan's LIFER Seaside and Saltmarsh Sparrows.  Took me a few stops, but I was eventually able to deliver the local amadromus .....


Posted by Welsh Birder Abroad at 3:32 PM No comments: