A Weekend in Borneo

Making the most of a Free Weekend in Singapore to get a few Life Birds.


Birding trips to Borneo usually last two to three weeks.  They include time in the highlands of Kinabalu National Park and then usually some additional rainforest sites in lowland Sabah with the more intrepid birders going on to Sarawak for some range-restricted rarities.  I have never had the opportunity to take a trip like this but have always wanted to go to Borneo and see some of the amazing birds they have there.

As a child I heard stories of the Bornean rainforest from my father, who had fought there as a British Army Paratrooper in the '60s in a conflict between Indonesia and newly independent Malaysia.  He never spoke about the fighting, but he did have endless tales of flying lizards and flying snakes, orangutans and giant biting insects of various sorts.  For 25 years I've looked at trip descriptions in Birding Tour Company catalogues but somehow never got to Borneo.  So, this year, determined to make more out of free weekends on business trips, I took a chance, jumped on a flight from Singapore to Kota Kinabalu after work on Friday night, met up with Wilbur Goh of Bird Tours Asia, and set off for a day and a half of birding on island I had so long anticipated seeing.

A very early start, and a drive through winding mountain roads in the pre-dawn light, took us to the fabled Kinabalu National Park.  Any illusions of heading into the wilderness were quickly disabused as the sun came up and revealed good roads, pretty scenery, and not a lot of forest remaining in what seemed like a terribly small park, especially given how famous it is.  Still, the birds were supposed to be there so, after a quick roadside breakfast where several other birding groups passed by us on the road, we got down to business.

First identifiable bird of the day was an Eyebrowed Jungle-Flycatcher feeding in the road as it got light enough to see.  A life bird and soon joined by others with Chestnut-hooded Laughingthrush, Bornean Whistler and the engaging little Bornean Stubtail all joining the list.  Then we realized that a star bird was calling just down the road and spent twenty minutes stalking, and finally getting good views of an EVERETT'S THRUSH singing in the understory downhill from us.  Not a bad start.

We spent the rest of the morning working our way up and down the Power Station Road (and some of it's short side-trails) uphill of the Park HQ.  For such a short, and well travelled (and birded) road it was truly very productive with many life birds for me, including Blyth's Hawk-Eagle, Blyth's Shrike-Babbler, Bornean Treepie, Bornean Swiftlet, Bornean Whitling-Thrush and the very spiffy Bornean Green-Magpie.  Undoubted highlight on the way up though was a FRUITHUNTER, a bird I had not expected to see with only one day in habitat.  We heard one calling up on the slope above the road and were able to get close enough for views along a steep side-trail.  Another one of the key target birds joining the list not long after breakfast.

On the way back down the road things got even better.  First we bumped into a super cooperative WHITEHEAD'S BROADBILL sitting close to an apparent nest site.  This was perhaps the bird I most wanted to see in highland Borneo, a giant among the green broadbills and an electric-emerald jewell in the forest. 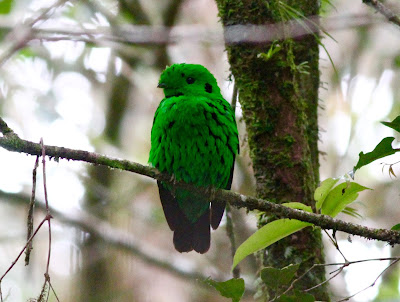 With the broadbill in the bag, the idea of seeing Whitehead's Trio came to mind and we quickly added a couple of female WHITEHEAD'S TROGONS to the list in the mirk of the forest. 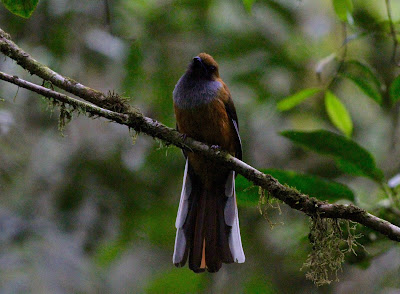 Too soon though it was lunch time so the third member of the trio, the Whitehead's Spiderhunter, would have to wait.  Even lunch was good though, traditional Malaysian food with a couple of lifers seen from the restaurant terrace while we were eating. 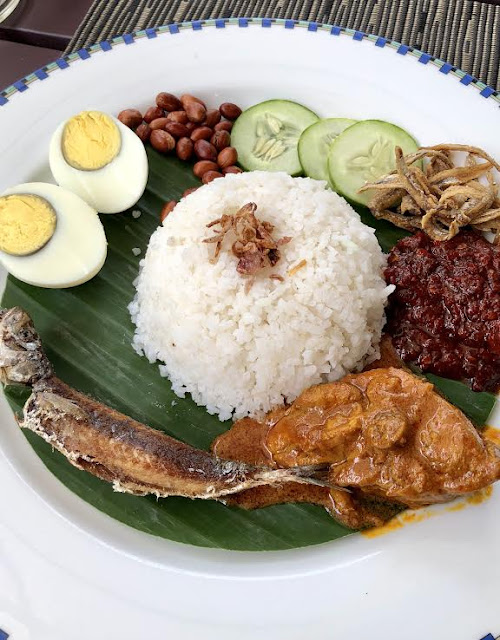 In the afternoon we tried some new trails, and covered a lot of ground in the forest away from the road.  While we didn't get everything (how could we in one day?) we added a lot more species, and more lifers for me, including the freaky Bare-headed Laughingthrush. 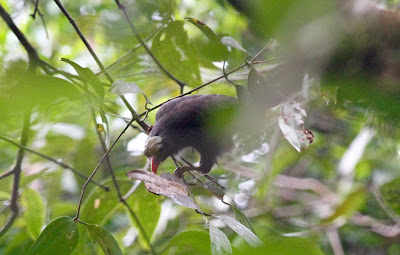 With most, but not all, of the Kinabalu specialties in the bag, we decided to change plans and bird the Crocker Range on Sunday morning before heading back to the airport for my flight back to Singapore.  Recognizing that we couldn't get all the highland specialties in one weekend, we decided to focus on the one I most wanted, Whitehead's Spiderhunter.  While the plan was good, the target unfortunately eluded us ... we had Spectacled and Bornean Spiderhunters but no Whitehead's Trio for me.  There were a few more life birds though, so certainly not wasted time.  In all I ended up with 35 lifers in a day and a half.  Certainly a good use of a weekend. 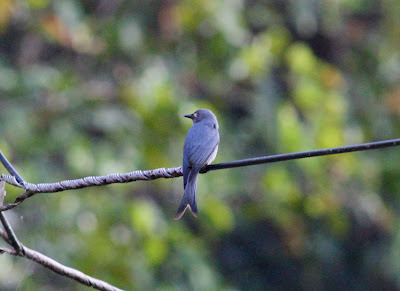 Posted by Welsh Birder Abroad at 12:32 PM No comments: