A Weekend in Southern Brazil

An odd weekend to pick up some star birds in a couple of Southern Brazilian states.  Saturday started with a long, twisting drive across a low mountain range (Dramamine please!) before a lunch stop at the best restaurant in Itapoá in Santa Catarina State.  The restaurant was good, largely filled with little old ladies, but close to a beautiful beach full of attractive Brazilian surfers.  Birding trips aren't always dull ...

Just before lunch we'd made a stop for a seriously good bird and spent an hour along a side road in short, scrubby looking, forest looking for KAEMPFER'S TODY-TYRANT a seriously 'must get' bird with a very limited range.  The tody-tyrant actually cooperated and came in right away to tape but circled us quickly defeating my photographic abilities (many photos of branches where the bird had just been) and was gone.  The area was super productive though, giving me 4 life birds with Restinga Tyrannulet, Three-striped Flycatcher and Black-backed Tanager all being new for me.  Then lunch ... on the beach ... no complaints.

After lunch, we had a serious goal ... mop up a bunch of specialty birds in the Itapoá area.  If we succeeded then we could leave early next morning and have time to bird in Paraná State, and if we didn't succeed, then we'd bird in the same area the next morning.

First up was PARANÁ ANTWREN, a super-range-restricted species that had previously been recorded in a trashy-looking marsh area in the port district.  We heard them quickly but it took quite a while to coax one out into view and the sound of trucks thundering by on the road didn't help much.  The habitat here seems so vulnerable but it doesn't look like it's protected in any way, things may be bleak for this species.  While we were working the antwrens we got two bonus prizes, the locally common Azure Jay dropped by, then a big flock of BROWN-BACKED PARROTLETS flew over.  The big flock, 50+, was a huge surprise and this super-range-restricted (tiny spot on the map) and rarely seen species wasn't really one I'd held any hope of actually encountering.  Eduardo played a recording to try to get them to turn, but too late, and they carried on flying over.  Still, a nice piece of luck and nice add for the trip.

Nest, on to Volta Vehla reserve, a beautiful little private reserve with nice forest trails, good accommodation, but perhaps a few too many mosquitoes.  The must get bird here was SCALED CHACHALACA and they obligingly showed up along the entrance road as we drove it.  That allowed us a leisurely evening of birding along the trails which added such goodies as Gray-breasted Crake and Black-capped Foliage-gleaner ... and another dinner at the fancy restaurant ... the clientele was the same but the fresh local fish was really good. 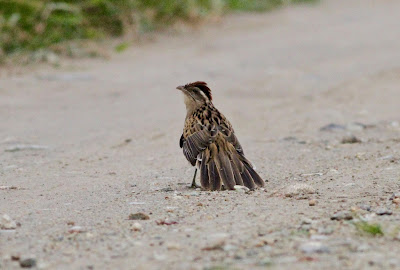 With our targets cleaned up, we got up super early and headed back to the city of Curitiba where first stop surprisingly was an urban park.  Park Barigui was a great piece of habitat with several fairly large areas of native forest, but it is an urban park with lots of people and at the first stop a whole bunch of drunk teenagers finishing a long night of drinking.  Still, we were intrepid birders and so pressed on, entering "the forest" and playing for my target bird here, the CANEBRAKE GROUNDCREEPER a very cool Southern Brazilian specialty with a very evocative name.  The Groundcreepers popped up on request and we worked our way though the "forest" adding a few more lifers for me, namely Olive Spinetail and Gray-throated Warbling-Finch.  In a way I felt quite at home ... joggers, shady characters of various types, drunk teens, and older cruising gay men all reminded my of Central Park.   Birding sure does take you to interesting places.

And so out last stop was an area of marshes, woodland and fields near the airport where we added a few more goodies like Chestnut-backed Tanager and made a heroic effort to see the recently described MARSH TAPACULO.  I know this species as the Tall-Grass Wetland Tapaculo and had read about it's discovery (in 1997) and really wanted to see one.  Eduardo's (my guide) heart visibly sank though when I mentioned it, clearly this was not an easy bird to see.  We spent a couple of hours at the Estrada do Curralinho marsh, a known hotspot for the species, and positioned ourselves around an area where other birders had cut a path through the impenetrably dense marsh vegetation to see the bird.  Dense actually doesn't even begin to describe this habitat ... the chest-high grass was so tightly woven together that walking through it was quite impossible and yet, this little bird loves the stuff and scrambles around completely safe from predators in the almost solid mass of tangled vegetation.  We heard the bird ... it responded readily to tape ... but it did not come to the edge of the grass.  Still it was a memorable experience to encounter a bird I'd read so much about and eventually I released Eduardo from his torment and said that "heard only" was just fine.

Then time for lunch ... an amazing meat banquet at a local rodizio restaurant ... and a flight to Saõ Paulo then on to New York.  Until next time Brazil ...
Posted by Welsh Birder Abroad at 7:05 PM No comments: