After the trip to Gunung Gede, I had a spare day in Jakarta and opted to use my Sunday to chase down a few more local specialties and a couple of globally threatened/endangered species.  Jakarta's traffic is legendary but with a  4am start from Ciboda, we managed to skip the worst of it and get to the NorthWest of the city not long after dawn.

First stop was Muara Angke, a patch of mangroves and wetlands totally surrounded by urban development and busy roads.   It was hopping with birds first thing in the morning and before we'd gone too far down the (somewhat rotten and scary - remember I weigh a lot more than the average Indonesian) boardwalk we'd seen SUNDA TEAL, a Black Bittern, and great, although distant views of a perched SUNDA COUCAL.  This last bird was the clear target here, pretty much a Javan Endemic (a few sites on Sumatra) and very limited in terms of the places where you can easily see one.  So the day was starting out well and we were hoping for a few more goodies when a government official (not one of the usual reserve rangers) appeared and told us we had to leave.  Seems we were caught up in some local administrative squabble but arguing wasn't productive so we changed our schedule around and moved on to our next destination. 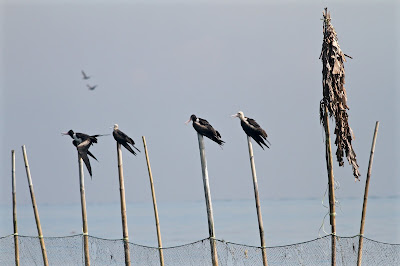 Next stop, after a long drive with the dense traffic of Jakarta in the morning - sometimes Jakarta feels like 20 million teenagers just got mopeds and are out trying them out for the first time (which may well be true) - was a chartered boat ride to the fish traps near the island of Palau Rambut.  The poles, and presumably the fish in the traps, attract frigatebirds of several species in season, and it's one of the best and most reliable spots for traveling birders to get CHRISTMAS ISLAND FRIGATEBIRD.

Christmas Island isn't easy to get to.  A small Australian possession closer to Java than to Australia and famous for it's (now threatened) land-crab migrations, it also has a few endemic land-birds and it's own Frigatebird.  Luckily the frigatebirds spend the non-breeding season wandering around, and many of them end up near Jakarta where they can be relatively easily seen.

In addition to the 45 Christmas Island Frigatebirds, we also had 10 Lesser Frigatebirds, and apparently it's also possible to see Great Frigatebird here in November.   Definitely one of the best places in the world for frigatebirds. 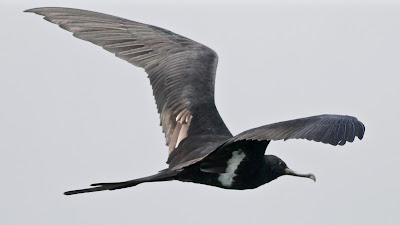 The area also has another star bird, as Milky Storks are often seen flying over on the way to a breeding colony.  This is another widespread but scarce and threatened bird so I was keen to see one.  In the end I saw 17 as small groups passed high and distant over us on the way out to the islands.

So no complaints there, and after weaving our way back through the crazy traffic and and stopping briefly to get JAVAN PLOVER at some fish ponds, it was time for lunch!  With few targets left, we made our way back to where we started the day and stopped for some amazing Indonesian food in a very fancy, Range Rover filled shopping area - Indonesians do seem to love their cars. 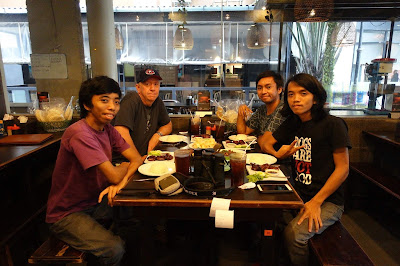 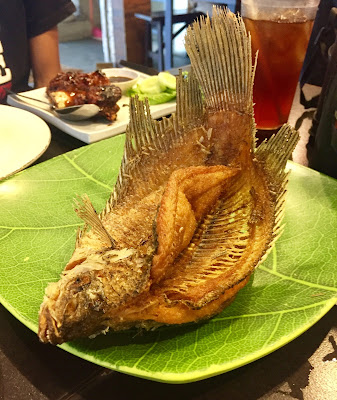 The team above - L to R: Boas Emanuel (Jakarta Birder), Me, our driver, and Khaleb Yordan (who organized the whole trip and is very much THE birding guide in Indonesia these days).

Indonesian food is amazing and I'm sorry I didn't have time to try more.  This last lunch consisted of some traditional spare-ribs, an amazing spicy vegetable dish with a peanut sauce, and this fried gourami.  All very good.

After lunch we headed to another relic patch of mangroves at Hutan Lindung, this one surrounded by multi-million dollar homes in a gated community.


Targets here included Small Blue Kingfisher, which we saw quickly, and Black-winged Starling (which we'd missed earlier in the day at Muara Angke).


The highlight here for me though turned out to be an Estuarine Crocodile (Saltwater Crocodile).  As we came in, the rangers told us that there was one about, and as we walked the boardwalk we bumped into a fisherman who was excited to tell us where to see it.  I love seeing these creatures holding on in urban and suburban environments (I saw one last year in Singapore too).  The don't do much usually at least in the day when you see them - just sleep - but it's good to see that they are still around.

While we were there, we got a call from the rangers at Muara Angke saying that whatever this morning's problem was had been resolved and inviting us back.  We headed over in the hope of Black-winged Starling, despite gathering rain clouds, for a last vigil.  The clouds became rain that did indeed force us to stand under a shelter for a while, and the starling did not show itself but we did have a consolation Chestnut-winged Cuckoo and lots of other birds to keep us amused.   Nice place to end the day, and always amazing to see how much life hangs on in these tiny little scraps of habitat left in the giant cities.  Definitely worth seeking them out.

Posted by Welsh Birder Abroad at 11:11 AM No comments: