Some interesting blog posts and a shout out for a conservation issue ....

Going a little off the bird topic and on to my other favorite group of vertebrates, fish.  I am a fisherman, mostly a fly-fisherman, although I grew up in the UK fishing all three disciplines.  We went GAME FISHING for Salmon and Trout with fly-rods (and sometimes spin tackle), sat for endless hours COURSE FISHING for carp and pike, and spent many cold Winter days SEA FISHING either by surf-casting or by fishing from piers.  Fishing was very much a core of my childhood outdoor life and, while it was ultimately surpassed by birding in terms of time and attention, I still occasionally pick up a fly-rod and have cast them into waters as far flung as Alaska, Quebec, Argentina and Japan over the years.  I am also completely fascinated by the diversity of fish, which in may ways is the same fascination I have for the diversity of birds.  Fish are just harder to go and watch.

Laying in bed this morning and skimming Facebook I came across a great article by Matt Miller on Suckers over at The Nature Conservancy Blog.  A cruelly misunderstood and unfairly maligned group on native fish, that I've seen but never caught, led me to an interesting couple of hours of immersion in a whole other sphere on natural history.   I figured I'd share some of what I learned, and also give a shout out to some of the folks doing great conservation work in this area (on the theory that any publicity for a good cause helps)


Suckers it would seem are a very oppressed group on native fish, often killed on site by anglers who wrongfully think that they are invasive, and damaging to fisheries.  In a world where trout and bass rule US fishing (and dominate what has become a very commercial sport), these natives are unfairly seen as 'competition' for the 'more desirable species' and persecuted to the point that species are struggling to survive.

This article led me to a whole other world of folks who actively fish for these species, a world called Rough Fishing (cousin of the UK's Course Fishing?) and to some fascinating stories from that sub-culture.

One of the best blogs I found was Ben Cantrell's Fish Species Blog which details adventures with fish that aren't all Bass and Trout.  One of the best articles, and a revelation to me, was a post on "Microfishing" where folks go out and pursue species usually considered too small to have any sporting interest.  The name of the game isn't a macho battle against a giant fish but rather a celebration of the diversity of fish species.  Now they really had my attention, as for years I'd keep a list of species of fish I'd caught with a fly-rod but had always been too self conscious to go deliberately target tiny fish just to add to my list.  But other people do!

These Rough Fishermen, are having fun, actively engaged in conservation, raising awareness, and keeping lists.  It's really like birding with rod and line and of course, where there are lists, there are people who take it to the next level and get seriously competitive.  Just like in birding someone is going to take that competition to the extreme, which in this case is a guy called Steve Wozniak who writes a blog called 1000Fish detailing his attempt to catch 1,000 species f fish on rod-and line.

After reading about his exploits for hours I was itching to go and catch fish and to re-start my fishing life list (would eBird include fish do you think?).  I also had an urge to share - fish conservation is unglamorous and all the money and attention gets sucked up by the 'sport' fish leaving a lot of great native species struggling for attention.  Read some of the blogs.  There are good people doing important work out there.

Just itching for Spring .... and recovering from Gull-issues

I keep meaning to do a blog post, truly I do, it's just that I haven't really had much to blog about nature-wise so far this year.  To date 2015 has been dominated by work (yes, I do work) and snow, and neither of those things has really been very conducive to looking at nature or nature blogging.  Even my travel - Montreal, London, Wales, Washington DC) has not really been very outdoor oriented so far, and I just haven't seen a lot of stuff worth reporting.

This week, it snowed again, but at least there's something about a late March snow storm that makes you feel like the worst may now be over and that Winter might be finally behind us.  For whatever reason, I was really feeling the cabin fever today, a sure sign that Spring is coming and that my nature addiction is close to kicking back in again after a dormant Winter.  Looking forward to putting Winter away and getting out there once again.

The 2015 birding year actually started out relatively well for me and I managed to grab some free time and get out a few times locally in the first few weeks of the year.  Some good birds quickly joined the list - Couch's Kingbird in the West Village, Cassin's Kingbird in Brooklyn, Harlequin Ducks at Montauk, a drake King Eider and Iceland Gulls at Shinecock, Tundra Swans in East Hampton, and a Cackling Goose near Riverhead.  I even managed to get a State Bird when I chased down a THICK-BILLED MURRE in Montauk Harbor (NYS #381).

I soon started to get that slipping feeling though.  Others were going out birding more, and finding great birds, and I simply wasn't keeping up, not with the time I had available to me to get out into the field.  For a brief while I fought the rot, chased the Pink-footed Goose (dipped) near Riverhead, the Barnacle Geese (dipped) near Calverton, and the GYRFALCON (yes!) near Wallkill, but eventually I had to recognize that this is just not going to be a big year list year for me in New York.
As of today, I've seen only 110 species this year in New York State, while the more serious guys are already in the 160s.  I've missed way too many Winter birds to be able to catch up - no Snowy Owls, no Glaucous Gulls,  no Barrow's Goldeneye, etc.  I'll just have to enjoy what I see and not worry about year-lisiting this year. 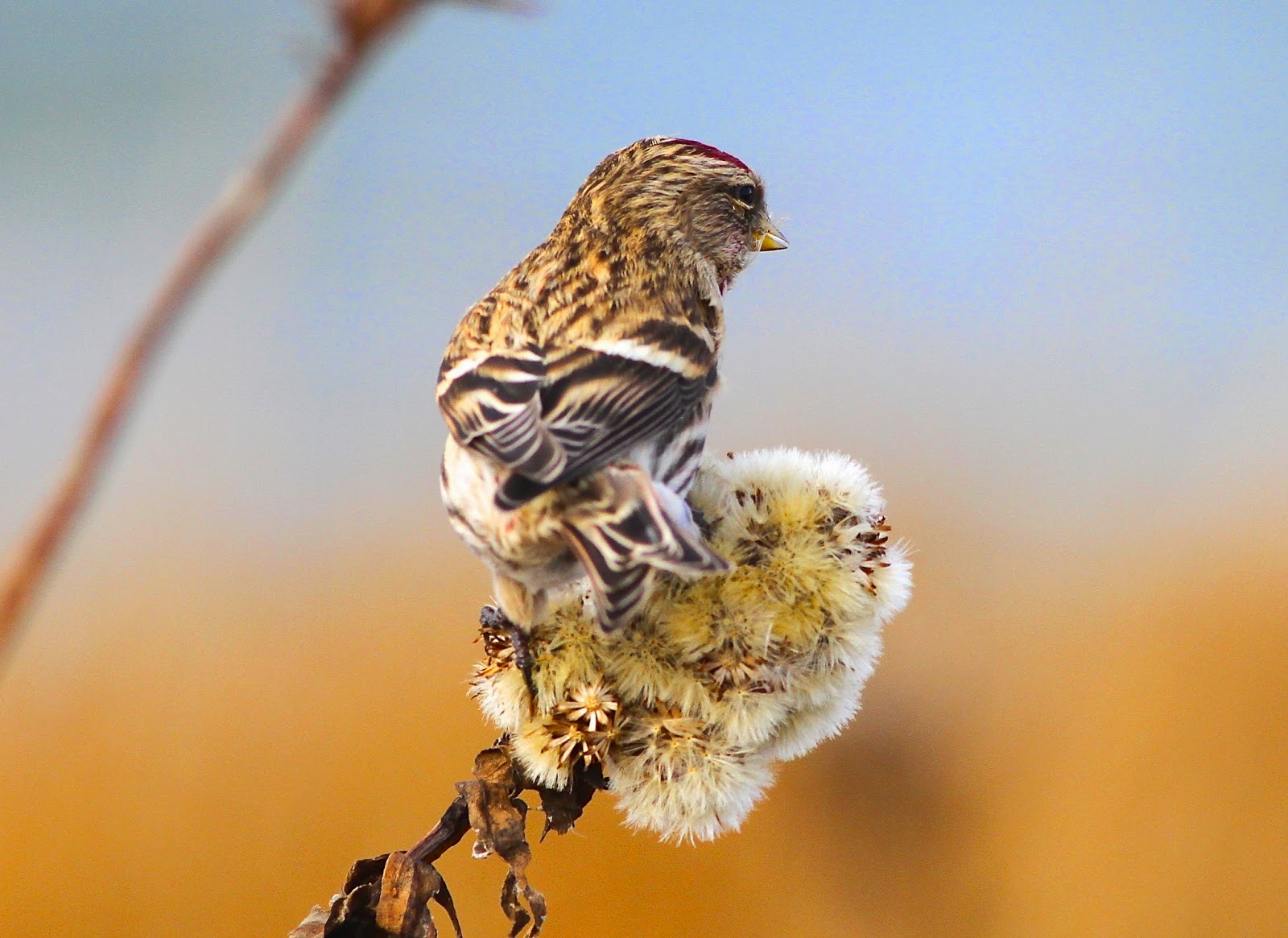 The bird that really killed my year-list this year was actually a gull.  A Common Gull no less!  Well technically a Mew Gull (although that's currently the same species as Common Gull), and actually not at all common here, thousands of miles away from the Pacific NorthWest where it makes it's home.  The bird was found by Shane Blodgett and showed up, as rare gulls are prone to doing, in a shopping mall parking lot in Brooklyn.  Many birders got to see it the first week or so it was there (while I wasn't able to travel) and then it fell into an infuriating pattern of vanishing for days or weeks before suddenly and unexpectedly popping up again in the same area.  I really wanted to see this bird which would have been a new species for New York State for me, and it also happens to be a species I've tried for and missed previously.  So I decided to devote a few hours to a search......

And so I ended up spending the better part of five (5!) days standing, freezing, in parking lots in Brooklyn (and not the trendy bits of Brooklyn), looking at gulls.  Every couple of hours a little old Russian lady might come by, empty a bag of stale bread, and start a mad swirl of activity as hundreds of gulls, dozens of Rock Pigeons, and even a few Brown Rats squabbled over the feast, but most of the time Mew Gull 'watching' involved just standing around in the cold, periodically checking hundreds of Ring-billed gulls to see if 'the bird' had flown in.  After each session I swore I would give up on this gull and go look for other things, and then a few days later someone would see the damned bird, and I'd give it one more try.  In total, this single bird took more than 50% of the free time I had for birding in the first quarter of 2015.  And no ... I did not see the bird.

And so, as we roll in to Spring I'm ready to put the Mew Gull behind me and move on. I almost gave it one last try this Saturday after a sighting was reported on Friday.  In the end I was saved my Shane though, he emailed me to say that he'd seen photos of the Friday sighting and that the bird was just a dark Ring-billed Gull.  Even though I'd already sworn that I wouldn't try again, Shane new that I probably would (and he was right - I am that stubborn).  But now I'm letting it go, and moving on, and getting excited for Spring.


Postscript:  I finished writing this blog post, went out to brunch with Kelvin and had a mimosa or two(enough to ensure that I could no longer drive for the day).  After brunch I checked my emails and, total predictably, Andrew Baksh posted that he and Angus Wilson had been watching the Mew Gull in Brooklyn for the past couple of hours.  After a week or so absence, the bird had literally reappeared while I was writing this post.  I give up ....

Posted by Welsh Birder Abroad at 1:08 PM No comments: