A Weekend Birding in Greece

So what to do when you find yourself with a free weekend on a business trip to Europe?  Not the most productive continent for potential life birds for me but it gave me a chance to go somewhere interesting, and if I could add a few life birds while I was there, so much the better.  After considering several possible countries - Spain? Portugal? Tunisia? - I settled on Greece, and flew down to Athens for two days of birding with Lefteris Stavrakas a local hot-shot birder who'd arranged a quick hit trip for me focussing on a handful of possible life birds.

We started the trip at dawn on day one birding near the Temple of Poseidon on rocky slope overlooking the Agean Sea .... how perfect a start to a Greek birding trip was that?  Our target here wasn't very exciting, but we soon managed to find a family group of Chukars (Life bird number 4,030) and duly added it to my life list.  Chukar is a widely introduced game bird (for shooting) and can be found across Europe and the American West ... I'd just never managed to bump into one.  These Chukars were introduced too, but common and established breeders (they occur in their native range on the near-by Greek islands and were introduced to the mainland when the native Rock Partridges got scarce due to hunting pressure) but I had to count one for the list at some point so I chose to take these for my life birds.  I felt a little dirty, but got over it and moved on fairly quickly, after all, I'll never have to life list Chukar again..

Next stop, after a longish drive, was the lagoon complex at Messolonghi which was simply stuffed with birds.  Shorebird migration was in full swing and we saw 22 species of shorebirds, including Broad-billed Sandpiper, and a wide range of waterbirds of various sorts.  My target bird here was Dalmatian Pelican (4,031) and we quickly saw four of these giant waterbirds along with a lot of ducks, terns, gulls, flamingos and a good scattering of migrant passerines.  A very birdy spot indeed. 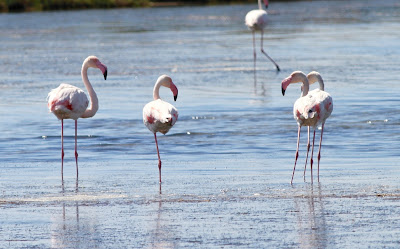 I also got my third life bird of the trip here when we tracked down some Western Rock Nuthatches (4,032) near the fascinating mud nest they'd presumably used this year.  This species was common and very vocal here, indeed we saw or heard a lot over the weekend, but seeing them around their amazing mud nest was a great way to add a species.  A very cool bird. 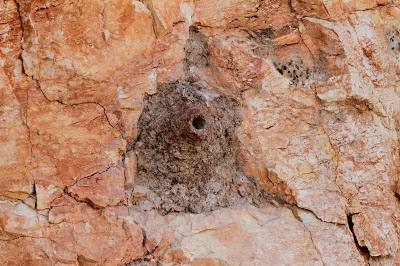 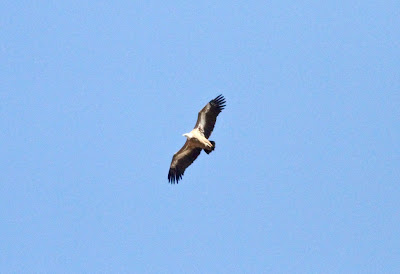 Last stop of the day was a stake-out (I haven't been doing well at stake-outs recently) where a Cinereous Vulture had been roosting with some Eurasian Griffons (Vultures) on the cliffs at a gorge.  We gave the bird a lot of time, enjoyed great views of the Griffons, increasingly rare given the global vulture collapse, and saw a good range of other raptors.  Our target bird however, did not show up, maintaining a tradition of me not seeing this species in places (Spain, China, etc.) where I could have done so. Ho hum ....

After spending the night in the grandly named, but rather basic, Hotel Aphrodite in Nafpaktos (not that I cared, I could have slept anywhere at that point I was so tired), we got up early and headed East along the coast road hoping for two more of my target birds.  We stopped at a small village and started birding the rocky cliffs and olive groves around it hoping for one target but quickly lucked out with another one when a very vocal Sombre Tit (4,033) popped up in an olive tree.

Pushing uphill we played recordings of what we though might be the most challenging target bird of the trip - scarce, heavily hunted and therefore very shy - and were rewarded (and a bit shocked) not long after when a Rock Partridge (4,034) called back.   Now all we had to do was see the bird .... somewhere up on a vast rocky slope above us.  In the end, persistence paid off and I caught a glimpse of movement well up the hill-side and was able to train the scope on a clearing in time to see a family group of partridges scuttle through it.  I was thrilled at the sighting, but mostly relieved that I didn't have to climb that slope to look for the birds.  Definitely the highlight of the weekend for me.

The Rock Partridges turned out to be the last lifer of the trip.  We spent a lot of time at the Plain of Kopaida looking for, and not seeing Long-legged Buzzard (although we saw a lot of other birds) and hit some coastal and woodland spots in search of year birds for me.  In all we saw 112 species, 5 life birds and 76 year birds, not bad for a weekend.

By the time I got the Athens airport I was exhausted.  Two full days of birding on not a lot of sleep and a long flight back to New York ahead of me.  I guess I'm not as young as I used to be, but was it worth it?  Yep, it certainly was ....


Posted by Welsh Birder Abroad at 7:24 PM No comments: