A Quick Weekend in the Philippines

I'll be honest, the Philippines intimidate me.  7,000+ islands, not all of them terribly accessible given security issues, 230+ (and growing) endemic species, and it's all a very long way from New York.  So I'd never managed to get there before this year and I certainly never had time to do the 2-3 week trips that most birding companies offer.  This year though, I did find myself in an adventurous mood and with a free weekend in Hong Kong.  So I jumped on a Philippine Air flight to Manila, met up with (super talented young) local bird guide Mark Jason Villa and headed out to spend the weekend at Subic Bay.

Subic is an odd city to say the least, a city built around the former U.S. Naval Base at Subic Bay, now converted into a port/enterprise zone for commercial development.  Much of the housing in the city is left over from the base, and many of the commercial buildings were either part of the base or grew up around it.  The former military zones of the base sprawl across a lot of land and are dotted with old structures, half grown-over concrete bunkers and the like.  It did and does contain a fair amount of forest though, and thats what attracts birders.

We had two full days to bird the Subic area and our goals were really to see as many of the endemic species as we could.  We had plenty of time for most of the resident locals and they came quickly to the list so we spent more time focussing on a couple of special and hard to get species with some mixed results.

The fist morning was very, very birdy and I had a slew of life birds.  Among the endemic species on the first morning were Brown-breasted and Spotted Kingfishers, Philippine and Rufous Coucals, Luzon Hornbill, White-bellied, Philippine and Northern Sooty Woodpeckers, Luzon Flameback, Philippine Hanging-Parrot, Green Racket-tail, and many more.  There were also some endemics with hard to remember local names ... Guaiabero, Balicassiao, and Coleto ... which gave the list a decidedly exotic feel.  In all, 25 of the 40 species we saw on the first trail on the first morning were lifers for me.  The up-side of being on an island is that a big percentage of the common species are endemics, the down-side though is that overall diversity tends to be low, and over the next day and three quarters we only added another 13 life birds while birding hard in the habitat. 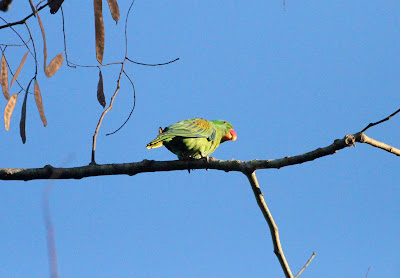 After the Nabassan Trail, we went to a restricted area and birded the Hill 394 Ridge Trail in search of a specific target, the WHITE-LORED ORIOLE which led us a long way into the trail before eventually surrendering and giving us decent views in the canopy.  We also had a bonus Philippine Falconet on the trail and glimpsed an eagle of some sort through the canopy, never to be seen again. 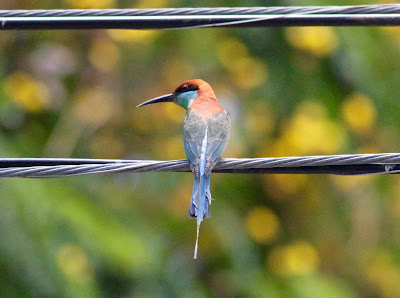 We then made the first of four visits to a site for White-fronted Tit, apparently a bird that is very hard to get in the Philippines and can be easier to see here than elsewhere.  While we spent a lot of time here, and saw good birds ... Amethyst Brown-Dove, Spotted Buttonquail, Stripe-sided Rhabdornis, etc. but despite Mark's hard work we couldn't come up with the tit.  Can't see everything I guess. 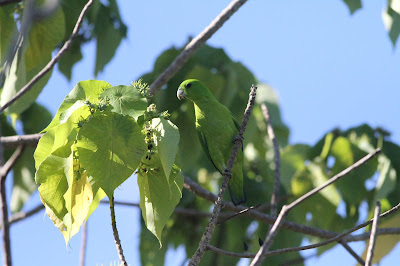 With two nights in Subic, we did have the opportunity to eat some great local food (including the amazing Adobo and the more challenging Sisig) and to go owling after dinner both nights.  We had lots of Luzon Boobooks, some Chocolate Boobooks, a couple of Philippine Scops-Owls and a Great Eared-Nightjar all with the added bonus of wandering around the abandoned concrete bunkers and military buildings in the dark.  An interesting experience.

So overall, only 71 species for the weekend, but 38 of them were new for me.  More importantly, I finally got to the Philippines and started my Philippine list.  38 endemics down, 200-ish to go.  I'm sure it won't be my last trip there ....

Posted by Welsh Birder Abroad at 3:43 PM No comments: