A Week at Two Lodges in SouthEast Ecuador

After a few days based in Quito, my plan was to join Mitch Lysinger and his Field Guides group for a week of birding in the very SouthEast of Ecuador, a trip anchored in a visit to the Maycu Reserve with the hope of seeing Orange-throated Tanager.  The tanager is a star bird, and historical border disputes in it's limited range had made it a very difficult bird to see until recently.  For me though, the trip was a bit of a 'low effort' thing ... the schedule worked for me, the price was right, and I had met Mitch before and liked him.  This was really meant to be a quick trip before a series of more extensive, expensive private trips and rarity chasing in Brazil ... little did we know at the time that COVID was about to change everything and it would be my last overseas birding trip for 18 months.

At the time, I was getting very close to the 5,000 species mark in eBird and so it seemed likely that the milestone would happen on this trip.  I had not seen any life birds in my two days near Quito but there were quiet a few possibilities in the South.  Would it be a memorable bird?  Or a more common and widespread one?  My 4,000th species had been Apurimac Spinetail in Peru, a rare and range restricted species but also basically a 'little brown job'.  Wondering what would take the 5,000th slot was definitely part of the fun on this trip.

After a quick flight to Loja we headed off towards Maycu and made our first real birding effort at the Old Loja-Zamora road.  A new road had been built leaving the 'old road' in a rough but passable state and with little traffic; an idea side-road for birders and a way for the group to get acclimatized to the local forest birds.  The birding was pleasant, no rarities here, but another chance to catch up with old friends.  Torrent Ducks and White-capped Dippers are always good value and were joined here by Fasciated Tiger-Heron.  We also had a nice mix of tanagers, a few ant-things, and a decent selection of flock-birds.  All very pleasant. 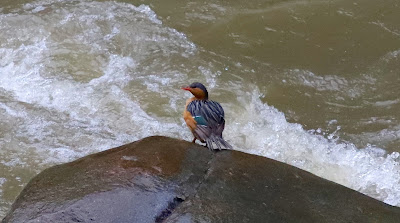 The next stop offered a chance for me to finally get a lifer.  A small 'garden' called 'Mi Paradise' planted heavily for hummingbirds.  The natural plantings attracted a nice selection of smaller hummingbirds, the type that get bullied away from the feeders at the lodges by their bigger and more aggressive cousins.  Here there were Wire-crested Thorntails, Little Woodstars, Glittering-throated and Blue-tailed Emeralds, Golden-tailed Sapphires and a single male Spangled Coquette, a lifer for me.  A lovely little lunch spot to break the journey.

A rustic lodge, but a comfortable one, and one with close proximity to the birding area, so we were all very happy to get out of the van and get settled in.  The cabins were close to the reserve entrance and overshadowed by the famous Cordillera del Condor, the sight of past military conflict between Ecuador and Peru along a disputed border line left unclear since colonial times.  These days the conflicts are over, in fact we wandered back-and-for across the unmarked border several times while we were birding along the road here.  We had two full days to bird the reserve and were looking forward to getting to grips with the mouthwatering list of goodies that had been previously reported here. 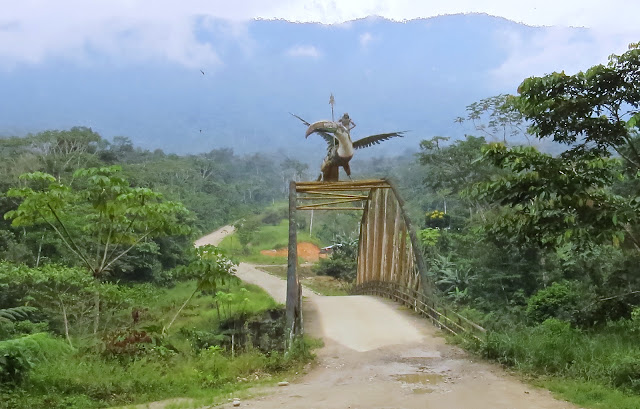 Over the next two days I added 18 new birds to my life list.  Just a wonderful variety of new birds along a nice open road through beautiful forest.  Lovely birding.  Golden-winged and Black-and-white Tody-Flycatchers joined the list as did Fiery-throated Fruiteater, Gray-tailed Piha, Lemon-throated Barbet, and Foothill Schiffornis.  We took the time to track down Zimmer's Antbirds, stalked an unexpected Uniform Crake, and played hide-and-seek with a calling Slaty-backed Forest Falcon.  Wonderful stuff.

At some point on day one, keeping count, I realized that I was at 4,999 species and, not 10 minutes later, the star bird, Orange-throated Tanager, made an appearance, taking the 5,000th species spot.  I couldn't have planned it better. 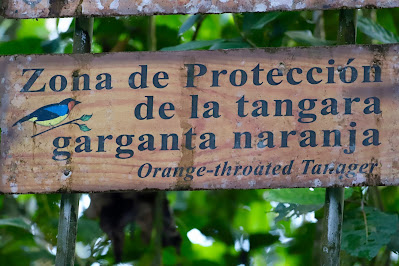 While there were a few targets we (searched obsessively for and) missed, overall it was a wonderful visit.  And of course I have reasons to come again ... which is always the best way to leave a place.  All too soon though, we were off again. 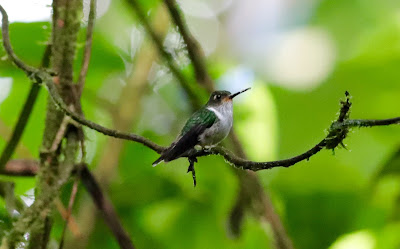 Our next destination was a much less rustic lodge, well situated near the Rio Bombuscaro section of PN Podocarpus and with a nice set of it's own trails and feeders.  No pressure for major rarities here but there were still some nice birds to be seen interspersed with lovely relaxed 'sits' at the feeders.

A trip to the National Park produced an Amazonian Umbrellabird, Black-streaked Puffbirds, and the poorly named Orange-crested Flycatcher.  We also staked out a mineral lick and were rewarded with great scope views of the very local White-necked Parakeet. 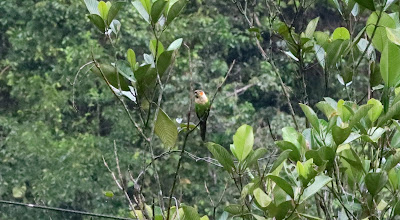 The feeders at the lodge were also very busy, with perhaps a dozen species of hummingbird and the occasional tanager or monkey.  Sitting and sipping coffee seemed like a very pleasant way to spend the time here. 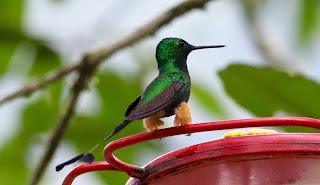 We did once manage to tear ourselves away to walk the local trails and were rewarded with great views of a Gray Tinamou, a bird I had heard before but never seen. 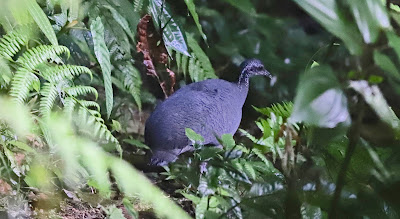 All too soon though our time was up and we birded out way back to Loja for our flights to Quito and onwards to home.  We did manage a few things en route, the highlight for me was an encounter with several breeding pairs of the nomadic Black-and-White Tanager in dry scrubby forest near Loja, but all good trips come to an end.  I expected to be back in South American fairly quickly, but the news was full of a new COVID virus in China that looked set to make it's way to the US.  As it turns out, it was already there, and all travel plans were put on hold for 18 months after our return ... my next trip to Ecuador was in January of 2022 ... and of course I contracted COVID while I was there ... but that's another blog post.