Sometimes You Get Second Chances .... Cassin's Kingbird in Brooklyn

A blunder then redemption ....

Got a late start today but when I finally got moving I decided to get off Manhattan and do some Brooklyn birding.  I headed over to Floyd Bennet Field (a disused WWII air base, now mostly wild space) not with any particular goal in mind but there had been a Cassin's Kingbird seen briefly at that spot last week and it seemed as good a place as any to look for late Fall migrants.  The Kingbird was a well documented single observer bird and only the second ever seen in New York State.  Many birders had searched extensively the next day and failed to relocate it, and with no sightings all week it was a pretty safe bet that the bird was long gone.  Rarities aside though, I had a good feeling about Floyd Bennet and figured I might find something interesting lurking in the grass and scrub around the disused runways and hangers.

Today started out well with a quick check through the Horned Lark flock on the Cricket Field actually producing a Lapland Longspur.  I always look for them here, but I never find them, so my luck was clearly in today.

There were plenty of other birds to see too - some Red Fox Sparrows mixed with Field Sparrows, a flock of Eastern Bluebirds, lots of Myrtle Warblers and a good mix of raptors.  I got into 'the zone' and started having a really fun time working through the grasses and scrub just counting sparrows.  As I worked the area behind the communal gardens though, I saw a bird that stopped me in my tracks.  I got just the quickest glimpse of the bird flying away from me, but the subliminal impression it left was a "Western-type" Kingbird.  I saw only the back but the wing and tail shape fit really well - I turned around and spent the next 30 minutes trying to get another look at the bird.

Now while I was busy looking for the bird, my brain was working overtime.  Was it a Kingbird?  Was it the Cassin's Kingbird?  That seemed really unlikely given that it had been searched for unsuccessfully all week - so perhaps my mind was playing tricks on me.  Wishful thinking?  I was practically muttering to myself after a half and hour and had pretty much convinced myself that I'd hallucinated.   Fearing for my mental health I decided to take a break and drove out of the park to get some lunch.  Not 20 minutes later the phone rang.  Andrew Baksh was on the line.  "Are you still at Floyd Bennet?  The Cassin's Kingbird is still here.  It's in the area behind the communal gardens".  Perhaps I should consider another hobby ....

So humble pie for lunch and back to the gardens to look for the bird again, this time with lots of company as 30 or 40 birders had quickly joined the hunt.  When I got back the news wasn't good.  The bird had flown off to the East, survived an attempted attack by a Sharp-shinned Hawk, and vanished behind some pines lost to sight for 20 minutes or so by the time I got there.  With so many people looking though it was only a matter of time before it was re-found and sure enough it popped up a half hour later right back where I'd seen it in the morning. 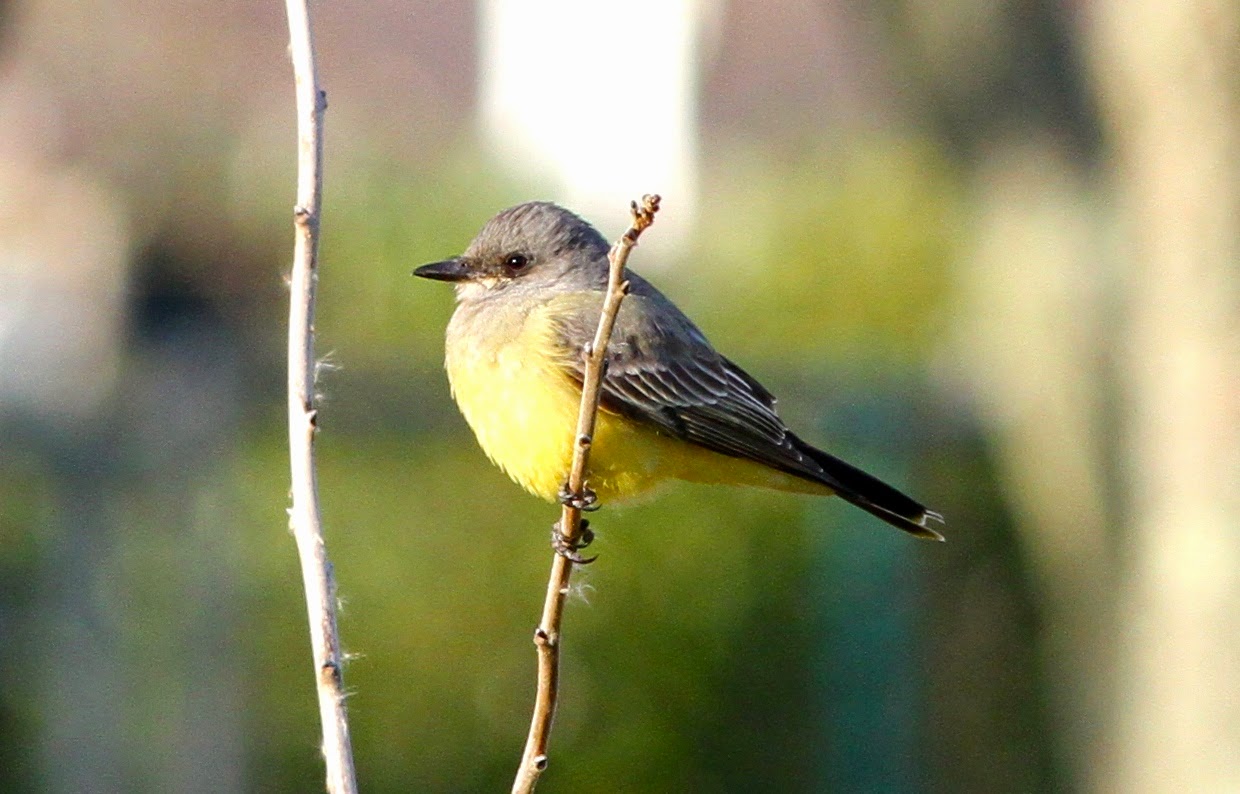 This bird was a second state record for New York State and a State Bird for me (I'd been close to the first record in Montauk - I was on a fishing boat just off-shore when it was found, but by the time I got back to land the bird had vanished).  My second State Bird in two weeks ....
Posted by Welsh Birder Abroad at 6:34 PM No comments:

Vagrants and the return of early Winter birds on Long Island

So this weekend was a good weekend for vagrants on Long Island, but not really a good weekend for vagrants sticking around to be seen by birders.  Two separate White-winged Doves were found at either end of the Island but neither remained in place long enough for others to see.  Not that many birders would have chased them in any case as just about every birder on Long Island was out trying to re-find a Cassin's Kingbird (2nd state record) that one lucky observer saw and photographed on Saturday in Brooklyn.  Sometimes the birds just don't cooperate ....

I really wasn't too concerned about the rarities this weekend; I'd decided to go out to East Hampton on Friday and had plans to do some local birding and some gardening (last chance for bulbs!).  My original plans would have had me stay 'East of the Canal' all weekend, birding in Montauk and the Hamptons, but a peculiar individual bird got in my head and persuaded me to change my plans....

About 2 weeks ago someone found a Common Ground-Dove at the Coastguard Station at Jones Beach State Park in Nassau County.  As a second New York state record the word was put out quickly and birders rushed over to the park to see it - only to be ordered away from the station by a Coast Guard 'Trainee' who clearly though a group of middle-aged folk with binoculars were a terrible threat to the base and national security, perhaps an advance guard for the Islamic State's planned invasion of suburban Long Island?  Undeterred, birders came back the next day and dodged the Coast Guard patrols only to see the dove get taken and carried off by a Merlin ... game over.  It seemed that I was not fated to add this species to my state list (I'd missed the previous record 4 years ago).

Or perhaps not.  Fast forward a week and 'another' Common Ground-Dove was found a couple of hundred yards away; this one missing a tail.  Could the original bird have survived a Merlin attack?  Looks like this was one tough dove and I wondered if it might stick around, braving the cold and the density of migrating raptors at Jones Beach.  Each day brought a new report of the bird still being seen so on Saturday morning I gave in to the pressure and ran back West to Jones Beach to see if I could find this dove.

Turns out the bird was easy to see - as I pulled into the parking lot I noticed a small lump out in the open and sure enough, it was a Ground-Dove feeding in the weeds that grow in the cracks between the concrete slabs in the lot.  I pulled up the car and took some photos then parked and started to walk back only to see the bird flushed by a birder who clearly hadn't seen it before it took off.  So, with the bird out of view, I decided to call it a success and head back to my original plan of birding in the Hamptons.


So back to the Hamptons where I hit a bunch of local spots on Saturday morning and did the standard Montauk circuit on Sunday morning.  There were a few of the Winter birds back in the area - American Tree Sparrows at Napeague and Snow Buntings at Mecox but most of the Winter goodies that people come out to the East End for just weren't back in place yet.


A sea-watch did produce a lot of Common Loons, 3 Scoter species, Greater Scaup and Common Eiders but no Alcids yet.  Time on the gulls flocks turned up the usual species and even a few lingering Laughing Gulls but none of the good Winter gulls that should show up soon.  Even Larry the super-regular Lesser Black-backed Gull that Winters in Napeague hadn't made his way back to his regular beach yet.  Just a few weeks early I guess but I did see some good things and felt like I was getting back into the swing of birding the local spots.

Perhaps the best things I saw on Sunday were actually mammals.  Two Gray Seals put on quite a show fishing close to shore at Montauk Point - I forget how big these guys are (we only have Harbor seals to look at all Summer) and am always shocked when one pops up in the scope at close range.  I also got to spend some quality time with a couple of very tame Red Foxes who I came very close to at Teddy Roosevelt County Park.  These guys were very relaxed in my presence and sat calmly as I walked by less than 50 feet away - so relaxed in fact that I wondered if I was about to have to fend rabid foxes off with my tripod.  Luckily they let me pass safely and rabies-free.

Posted by Welsh Birder Abroad at 3:53 PM No comments: