How do you decide what your nemesis bird is?  Is it the most common bird you haven't seen in a particular area?  If that were true, then my New York State nemesis bird would have been Mew Gull, which occurs annually and which I've searched for and missed often.  Or is it the bird you've missed, where the misses hurt the most?  I think I tend toward the latter, so after I finally caught up with Black Guillemot in New York this Winter, I decided that Brown Booby was going to be my new nemesis bird for New York State.

Why Brown Booby?  A long drive and a painful miss last Fall was still fresh in my mind.  Plus a bird that I could have seen but for a random change of plan a few years earlier and thus missed on my big year.  And of course,they're cool, in a goofy kind of way ... and I really wanted to see one in New York.

So of course when one showed up in New York, quite close to the City, this Spring .... I happened to be about 450 miles away at the other end of the state.  The bird arrived, and spent all day sitting at, the tern colony at Nickerson Beach giving almost every New York City and Long Island birder great views.  For a while I toyed with driving back overnight to be there in the morning, but the bird did not look well (being covered in tern poop is never a good sign) and sure enough it was found dead in the morning.  Another miss, but at least I hadn't driven all night to miss it.

I didn't think I'd get another chance this year, but fast forward to September and a Brown Booby was found in Montauk Harbor (30 minutes from my house, but unfortunately I was stuck in London then in New York City).  Then another potential state bird showed up nearby when Brent Bomkamp found a LARK SPARROW at Robert Moses State Park.  Two State Birds on Long Island and I was stuck in the City all week!

I decided that, as a grown up, I could keep perspective and wait until the weekend to chase these birds ... but this grown up resolve lasted until only about 10am on Friday, when my will-power evaporated and I jumped in the car and headed out in search of state birds.

Stop number one was Robert Moses State Park where the Lark Bunting had apparently been elusive and hard to find near the Volleyball Courts in Field 2.  I found the site easily enough and when I arrived expert local bird photographer Tom Reichert was on site and had just had the bird (!).  A few minutes later it popped up again and I got great views, and what turned out to be terrible out-of-focus photographs .... birders call them "Record Shots" while photographers are much more patient.  So LARK BUNTING joined the New York State list (#397) and I was off again in search of number 398.

So on to Montauk, and the real target of the day.  About an hour later I pulled up onto Star Island Road on Lake Montauk and, following directions from the bird alerts, looked out to the mast of a nearby Yacht .... and there was a suspicious brown lump on top of it .... BROWN BOOBY! 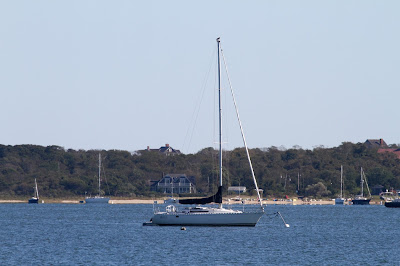 The bird actually flew off fairly quickly and, figuring it would be better seen from South Lake Drive I drove down and sure enough the bird was sitting on another yacht mast, this one much closer to shore. 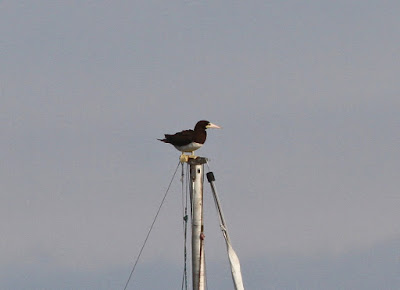 So two New York State birds in one day, and a little closer to my goal for 400 species in New York State.  The rest of the weekend, and indeed the next few week were anticlimactic after these two star birds, but this at least was a great birding day on Long Island.


Posted by Welsh Birder Abroad at 1:13 PM No comments: