Brooklyn in the rain for a New York City bird ...

After a super busy week I was really ready for some outdoor time on Saturday.  I didn't get round to checking the weather though so when I finally did I was just a bit disappointed to see that the forecast for New York was basically ... well torrential rain all day.  Still, being Welsh (I essentially grew up in a place where light rain is a Summer's Day and a nice break from the typical weather - i.e. heavy rain) I figured I'd go out anyway so headed over to Brooklyn to look for a Northern Wheatear that Shane Blodgett had found earlier in the week.

Shane may well be the ultimate patch birder; he flogs the Brooklyn shore spots and consistently finds rarities.   Skills + persistence = results.  The bird had been seen on-and-off during the week with many folks dipping and assuming that the bird had left.  Still, last night there was another report, and then this morning Rob Jett reported that the bird was still present, so off I went, sloshing through the rain on the BQE to the Plumb Beach parking lot.

When I got there I quickly found a mob of birders standing around in the light drizzle but heard that the bird hadn't been seen in a while. So we set up for a stake out and waited for the bird to reappear, which it duly did when Dave Klauber spotted it flying towards a railroad sleeper in the marsh not 30 minutes later. 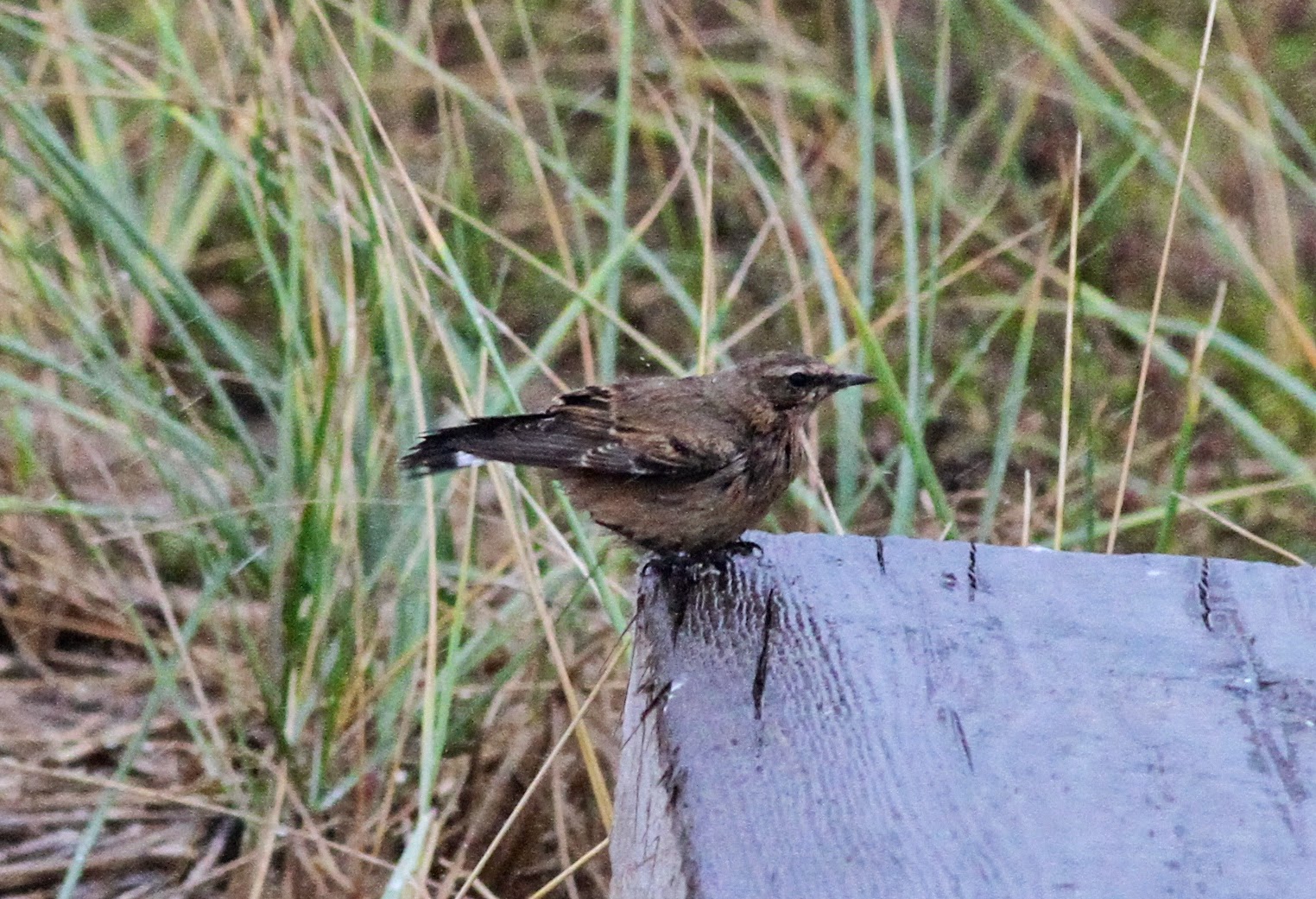 Wheatears seem to like something to perch up on, but in the marsh there weren't a lot of places to sit on - just a couple of driftwood logs, including this railroad sleeper.  The wheatear (or 'wet' ear) worked around the giant log, jumped up on it a few times, and kept coming back to it as a hunting perch.

This particular bird had been around all week and several folks have asked about it's age and sex.  Turns out that's not easy to determine. 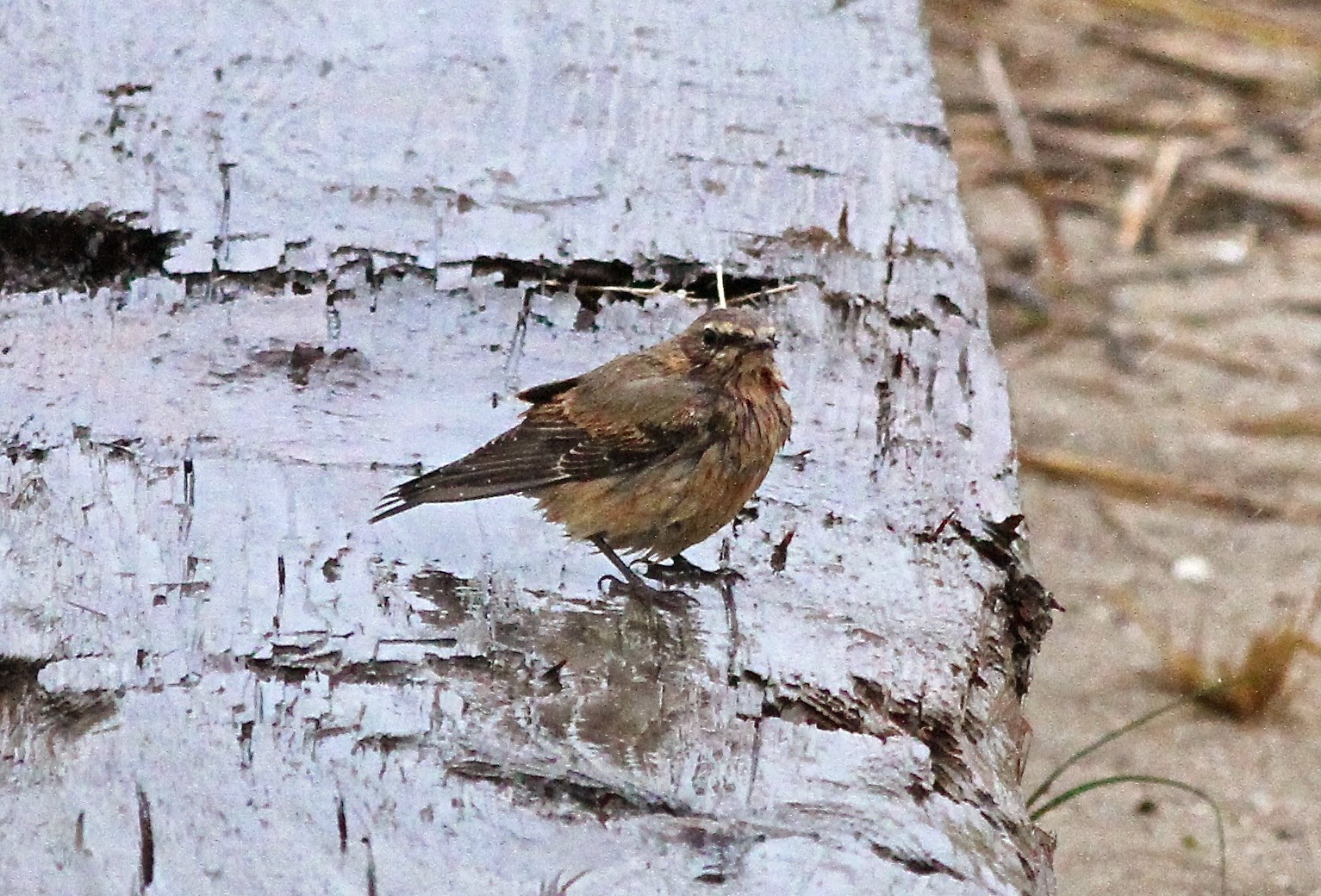 Here's Angus Wilson's take on an earlier New York Wheatear (opinion of a local expert birder ) and this stuff is way beyond my pay grade.

Several other local bird bloggers also got better shots (without torrential rain).  Here's the blog from Corey Finger for example. 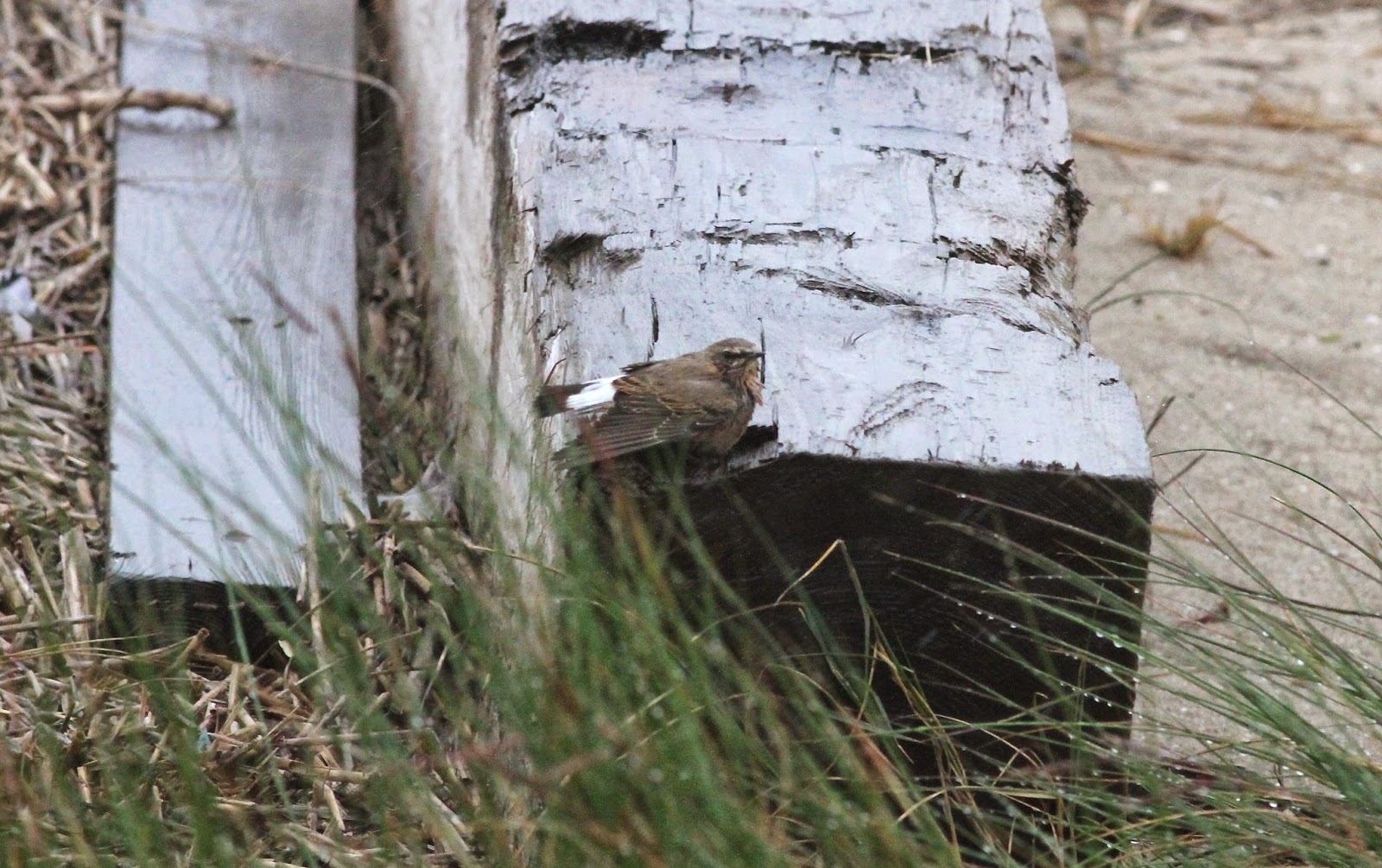 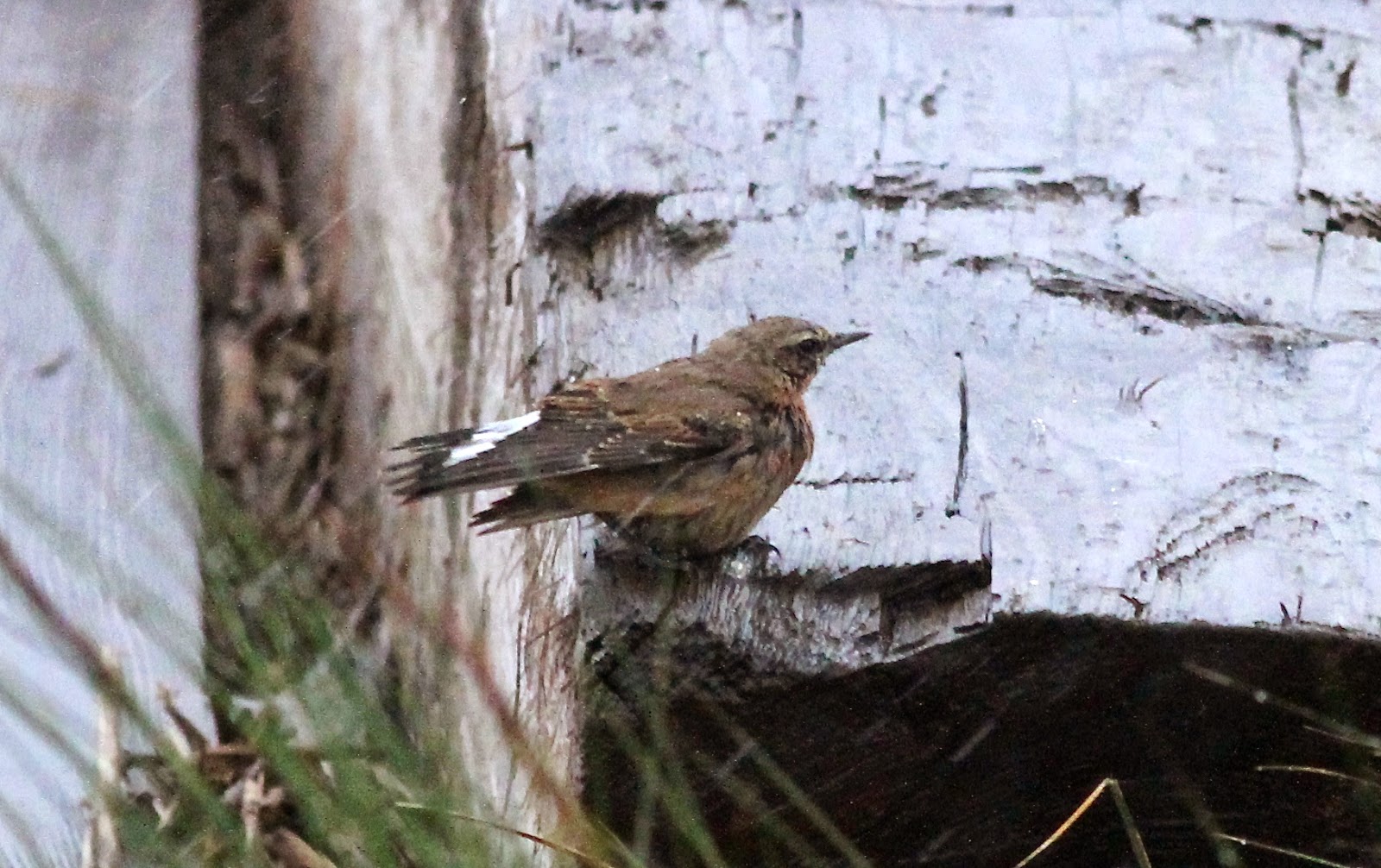 This was my 4th Northern Wheatear of 2014 (the others all being in Newfoundland) but only my second ever in New York State and my first for New York City!

I do have a soft spot for this species.  As a kid in Wales, Wheatears were the first real migrant of Spring (absent the odd Bank Swallow or Sand Martin as we called them) and were eagerly anticipated. 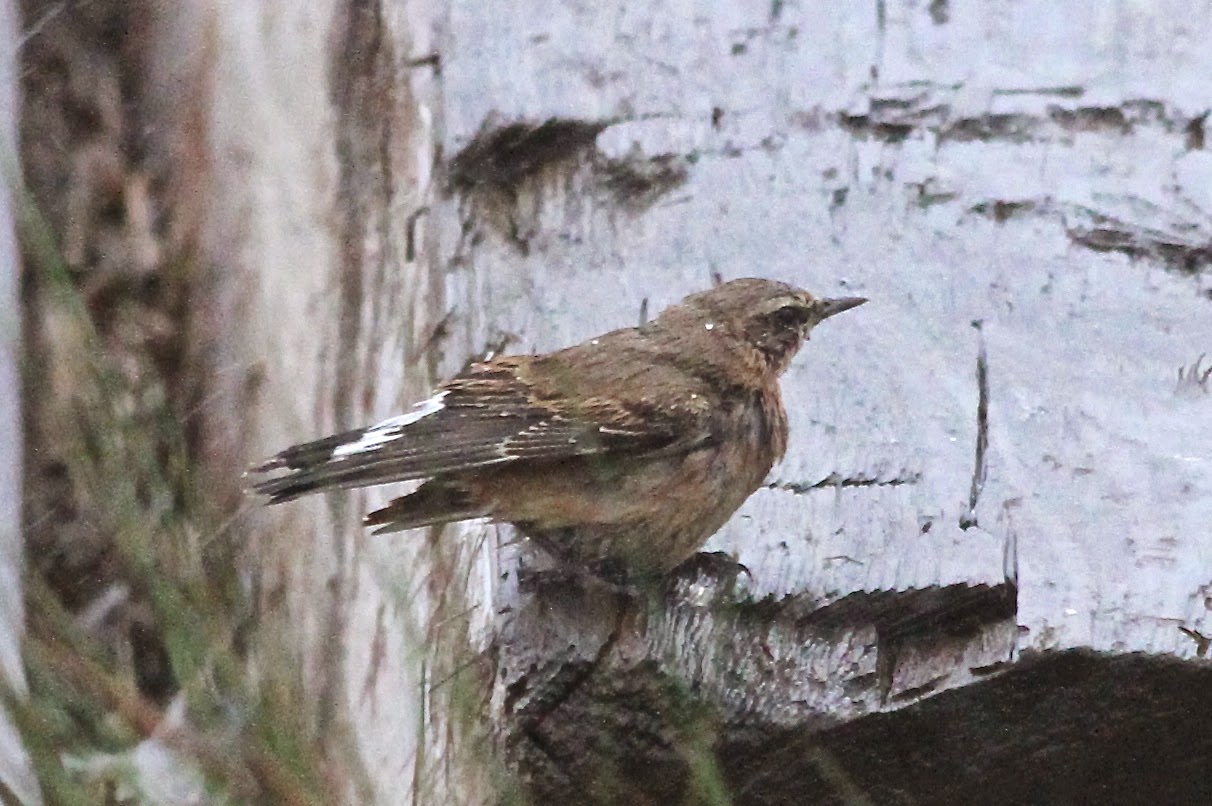 The Wheatears showed up on the coast in late March and were the heralds of the Spring migration to come.  We used to comb through the flocks of Wheatears (often in the cold with driving rain - some things don't change) looking for Ring Ouzels and trying to separate the Greenland Wheatears for the "Common" Wheatears.  Seeing one always takes me back to my childhood in Wales.  The rain today just added to the authenticity of the experience.

And rain it did.  While we were watching the bird the heavens opened and light rain was replaced by a torrential downpour (I mean real Ark-building weather) soaking everyone foolish enough to be standing out on a beach looking for birds.  I was completely soaked through, wet jeans, wet wallet, and a wet phone (which promptly died when I got back to the car, and never recovered).  So I see an iPhone 6 in my future ...
Posted by Welsh Birder Abroad at 1:22 PM 1 comment: