Jaegers are Rare in Brooklyn. Who knew?

Let me start by saying that I'm a huge fan of eBird, particularly of the democratization on birding information, which I think was sorely needed.  The structure of the database though, particularly the focus on maps, and counties, does produce some interesting quirks.  A bird that might be considered quite regular (and barely worthy of review) in one area might be a major rarity 10-miles to the West in a different county where there are more birders (and more people concerned with county-specific records and lists).  I seemed to stumble into one of those fault lines on Wednesday ...

I'd been stuck in the city all day on Tuesday, so even though it was windy and raining on Wednesday morning I really needed to get outside.  I decided to stay local and headed down to Floyd Bennet Field, figuring I could still push the sparrows around, even if it was raining, and in fact hoping that the rain had grounded a Lapland Longspur of a Northern Wheatear (hey, I can hope).

The first thing I noticed as I pulled in was there were a lot of gulls sitting in the parking lot.  It must have been a lot rougher out to sea than it looked from the shore.  Diverting from my planned route, I pulled into the lot and started scanning the gulls, quickly noticing a darker bird sitting behind them at the back of the lot.  As I got closer, the dark bird turned out to be a Jaeger, sitting on the ground, soaking wet, and looking very sorry for itself.  To me it looked very small, especially in comparison to the surrounding gulls, appearing smaller than the Ring-billed Gulls, and being dwarfed by the Herring Gulls.  While it looked really dark, I put that down to it being wet, and getting a 'round-headed, small billed' feel to the bird (just my impression at the time) I took a few photos and put it in the BirdLog App as PARASITIC JAEGER. 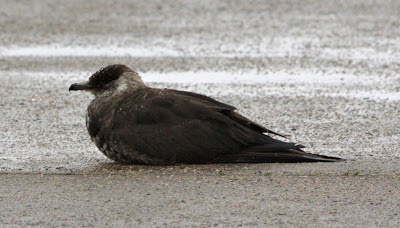 Being a fisherman, and regular 'chum-user', I see a lot of Jaegers in the average year, and have put quite a few into eBird this year (although almost all from Suffolk County).  So I was a little surprised to get an eBird review email within hours of the checklist uploading, and being of a suspicious nature, I wondered what had triggered the quick question?  Was it late for a Parasitic Jaeger perhaps? 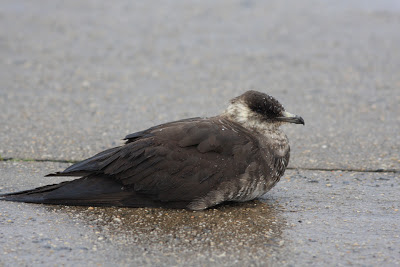 So when I got home, I downloaded the photos and started to double-guess myself (digital photography, the curse of modern birding).  So the mantle color could go either way; a wet brown bird looks a lot like a black bird.  The bill was pretty thick though, and strongly bi-colored, and then there was a black cap that did seen to extend down somewhat on to the lower face, but perhaps not as far back behind the eye as you'd expect for Pomarine.  So I wavered, and wondered if perhaps it was a very small Pomarine.

I ended up putting photos on Facebook (New York Birders page) and sending some to local experts Doug Gochfeld, Andrew Fansworth, etc.  Not too much agreement on the ID, probably as you'd expect for a couple of photos of a bird hunkered down in the rain.  There was some (half serious) consensus however that I should have flushed the bird and got some better shots of it standing, or flying (although generally birders tend to frown on a guy with a camera flushing a bird in search of a better shot). 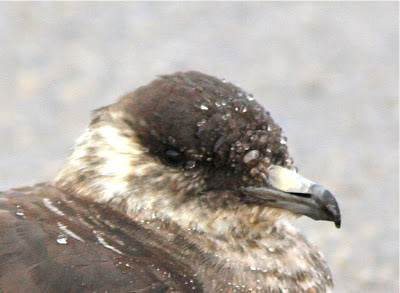 So, as of right now, I still tend to think this is a Parasitic Jaeger, based on my initial feel for size and build, not being convinced about the extent of the back on the face, and believing that the dark mantle comes from the rain (but experts feel free to chip in).  The eBird guys would prefer I made it Jaeger sp. noting that this is the first Jaeger record for 'mainland' Brooklyn in the last 7 years (!).  A good example of the geographic boundary creating a rarity from a bird considered relatively regular just a few miles away.  Wish I had flushed the bird now ...

Update (10/14/12): when all else fails I usually go to my old friend Steve N.G. Howell for ID advice.  He came down firmly on Parasitic Jaeger, but also thought I should have flushed the bird!

Posted by Welsh Birder Abroad at 9:20 AM