Turtles and Snowy Owls, walking the beaches in Winter.

I haven't really done a lot of birding of late.  It's been cold out here with a fair bit of snow and an almost constant freezing wind that makes seawatching seem pretty unappealing at the moment.  There also just hasn't been that much around, with very little turnover in the birds on the East End and nothing very exciting reported for a while.

By far the biggest Natural History highlight of late was a rather sad one and had nothing to do with birds at all.  We were walking the dogs on Sammy's Beach in East Hampton last week and noticed that the dogs were very focussed on a dark object up ahead in the tide line.  As we got closer we could see that the object was a turtle (!), not something you expect to see on a beach in New York in February.

The turtle certainly looked dead but I know enough to know that it's really hard to tell if an apparently dead sea-turtle is really dead or just 'mostly dead'.  Apparently turtles stunned by cold water go into some kind of torpor which allows them to shut down non-essential functions and survive in a coma-like state for some time.  The only way to tell for sure is to take an internal temperature reading and needless to say I was in no position to do that out there on the beach.  So I called the folks at the Riverhead Foundation, the experts who do know how to handle situations like these.

The Riverhead Foundation runs a marine animal rescue operation and sends teams out to help stranded whales and dolphins.  In the late fall they also end up rescuing quite a few 'cold-stunned' Sea-turtles that have stayed in the North Atlantic too long and been caught out by the rapidly falling water temperatures.  Quickly warming a stunned turtle will kill it, so they've developed a process to gently bring the animal back to temperature and seem to have a good success rate with saving them.  After getting a description from me, and asking me to send them photos, the Riverhead folks identified our turtle as a Kemp's Ridley Sea-Turtle, a critically endangered species that has been reduced to just a handful of breeding colonies world-wide.  They also unfortunately said that the turtle looked dead from the pictures but they asked us to mark the spot by standing up a stick in the sand and they dispatched a team to collect the turtle to make sure.  At the very least the specimen might yield some useful data and this was a very late date for a turtle to be this far North.

On the bird front, not much has changed.  I did manage to spend some time with the Hick's Island Snowy Owl today.  Of all Long Island's wintering Snowy Owls this one has been the most regular but perhaps the least reliable.  It winters on an island but still gets pushed around a bit by clammers, duck hunters, and the like so tends to stay away from the roads and other areas where birders could see it.  A lot of birders look for this individual over the average weekend but it's almost never reported on a Saturday or Sunday.  Today, it was sitting out in the open, although it was a long way away and my photos were 'record shots' rather than wildlife art.

I also did a circuit of the gulls and ducks today.  We've had 2 Barrow's Goldeneye at Montauk and some good gulls including 2 Iceland Gulls and 2 Black-headed Gulls.  Today there were still quite a few scoter and eider around and even a few razorbills out at the point.   Gull-wise I managed only a Lesser Black-backed Gull and an Iceland Gull, but I did enjoy spending some time with a close flock of Bonaparte's Gulls.  I've watched this flock a few times as it's the one which the Black-headed Gulls tend to join when they're feeding in Lake Montauk.  When I've seen the Black-headed Gulls on previous occasions the flock has always been distant.  So when I saw the flock was close to shore today I was excited at maybe getting some better Black-headed Gull shots, but unfortunately today the flock was 100% Bonaparte's.  Still, they're a spiffy gull and they'll be gone soon enough so it was fun to watch them while they were there. 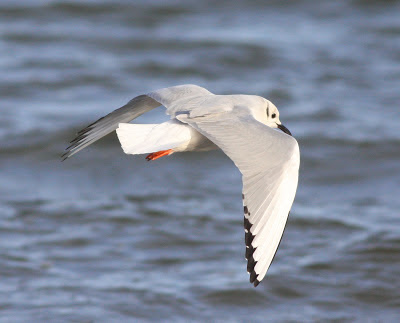 So onwards, and looking forward to next week's Pelagic Trip (fingers crossed that it goes) and dreaming of finally getting Atlantic Puffin for my New York State List.  Not a bird I'm likely to get seawatching so, as unappealing as an early March trip offshore sounds, sometimes you just have to go for it.