A few days of Year-Birding to start 2017

I think by now I can categorize it as a ritual.  I have started my year list in perhaps 7 of the last 15 years with a sunrise sea-swatch at Montauk Point, and it never disappoints as a great way to start a year of birding.  This year was relatively mild, and after a quick stop en-route to add Great Horned Owl, the day started there with a beautiful sunrise over the Atlantic as it got light enough to distinguish the birds.  And there were plenty of birds ... highlights including thousands of scoters of all three species, hundreds of Common Eider and a scattering of other sea-ducks, loons and grebes.  Specialty birds also put in an appearance with a couple of Black-legged Kittiwakes, a Red-Necked Grebe, nearly 75 Razorbills and a fly-by DOVEKIE (plus a Gray Seal).  Not a bad start.  23 species in all, and the year-list 2017 was officially on it's way.

After Montauk I worked my way back West, stopping at a number of local spots picking up more species at each of them.  Highlight for me was a GREATER WHITE-FRONTED GOOSE at Further Lane Fields in East Hampton (it's hard to tell but the picture below is a mansion lawn, not a  grassy field ... it's a big lawn and a big mansion).

By lunch time I'd worked my way to Shinecock Inlet where a couple of Harlequin Ducks and a Glaucous Gull were both good close views.  The local Snow Buntings were also quite confiding, but unfortunately, the only Snowy Owl of the day stayed at a very respectable distance. 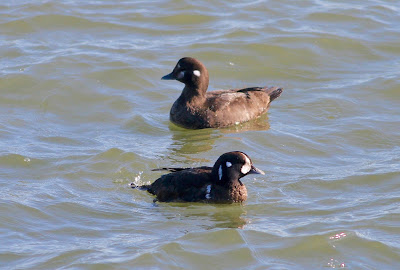 I finished the day off back at the house in Northwest Harbor watching my feeders and drinking wine on the deck, coming out again just after dark to hear my local Eastern Screech Owl become Owl species number three for the year.  Not a bad way to start 2017.

Up early, but unfortunately I had to head back to the City with the dogs in the car, allowing me only two or three quick stops on the way back in.  Stop one was Robert Moses State Park where I managed to dip a couple of Ross's Geese that had been present for several days but had apparently moved on.  There was a nice consolation though in the form of a single Lapland Longspur, a bird I rarely see more than one or two of in New York in the average year.

Last stop of the day was Cammann's Pond in Nassau County, where I'd dipped a BLACK-HEADED GULL a few days earlier.  No problems this time though as the bird was on the water near the parking lot and I saw it before I'd even turned off the engine.  A new species for me for Nassau County (#214) and a bird I missed altogether in New York in 2016, so I was happy to call it a day and had back to the city with a nice haul of 92 species on the year list.