I go to Saõ Paulo (the city) for business quite often and have done quite a lot of birding in Eastern Brazil over the years.  People often asked me if I'd been in Intervales State Park though, and even though it's only 4 hours drive from the city, up until this year I never had.

This March trip to Saõ Paulo started out as a dinner plan, then a few days in the office got added, then a weekend with friends, and having morphed dinner into a 4-day trip already I decided to stay the whole week and add 5 days of birding to the itinerary too.

Up bright and early to meet Eduardo Patrial at Congonhas Airport to pick up a rental car.  The night before had been long and full of amazing food and wine so I wasn't exactly at my most perky, and of course the rental car process was infuriatingly long and inefficient, but eventually we got on our way and drive out of the city heading South.  There really wasn't much to see on the drive down, just fields and cows, but after a quick lunch stop we pulled off the paved road and headed up into the forest for two and a half days of nothing but birding.  Deep breath ... fresh air ... smile ... 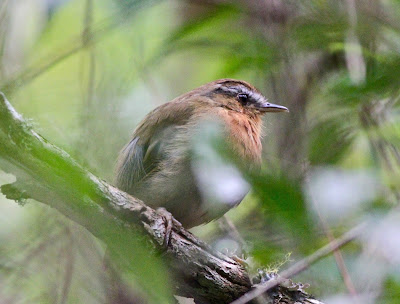 The first afternoon was for getting oriented so we checked out a number of the best spots and areas where some good birds had been habituated through feeding (none of those birds were present).  We did take the opportunity though to check out the lek of PURPLE-CROWNED PLOVERCRESTS, truly spiffy hummingbirds where the males sit still in dense cover and 'sing' to attract females to them.  When we got to the lek area we could hear two males singing and saw a female.  I wanted to see the male though to bushwhacked into the dense vegetation, and after 20 minutes of carefully searching for a bird we could hear close to us but just could not see, a slight change of angle added the plovercrest to my life list.

Then it started to rain a little so we headed back to the car and realized that that dense undergrowth had been perfect habitat for ticks which had transferred to us nice warm mammals while we were looking for the birds.  Then it started to rain A LOT ... the type of tropical deluge that dumps several inches of rain in the space of minutes.  So we gave up birding for the day, went to the guest house, ate chicken, rice and beans (our staple for the trip) and hoped that it would stop raining before the morning.  At that point I wondered if it was ever going to stop raining ... the sort of biblical downpour that has you wondering how to build an ark.

No rain, and a full day of birding with Eduardo and an excellent local guide added a lot of life birds for me, perhaps 20 in all.  We saw the usually skulking SOLITARY TINAMOU and SPOT-WINGED WOOD-QUAIL up close and personal.  The forest had a nice selection of antbirds, antvireos, antwrens, antthrushes, antpittas, antshrikes (collectively I call then 'ant-things') plus lots of woodcreepers, foliage-gleaners, treehunters, leaftossers ... the list goes on.   We took the time to track down a White-breasted Tapaculo (I love tapaculos) and lucked out with a Royal Flycatcher, and that was all before lunch. 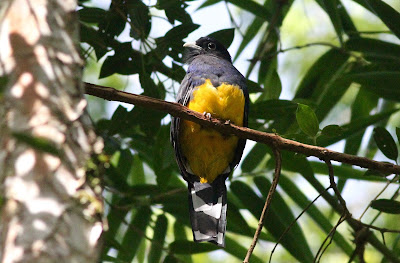 In the afternoon we took a quick side-trip outside the park to find HALF-COLLARED SPARROW, a really attractive sparrow that seems to like the second-growth and bamboo habitat along the park entrance road.  Then after failing to see Long-trained Nightjar at a stake-out we ended the day on a high note with LONG-TUFTED SCREECH OWL nearby.

Another full day in the forest with a specific goal for the morning.  We hiked a long way down a relatively steep trail into a valley.  All the way down I was of course thinking of having to walk back up but the birds and plenty of Brazilian Tapir and even Ocelot tracks kept me in a good mood as we got closer to our target.  I was still getting life birds and added Black-cheeked Gnateater and Blue-bellied Parrot before we even got to the main event.  Intervales seems to be The Place to see RUSSET-WINGED SPADEBILL and today the bird didn't disappoint, popping up promptly when we got down to it's territory (note to self though - have to get in better shape before the Horned Guan hike in August). 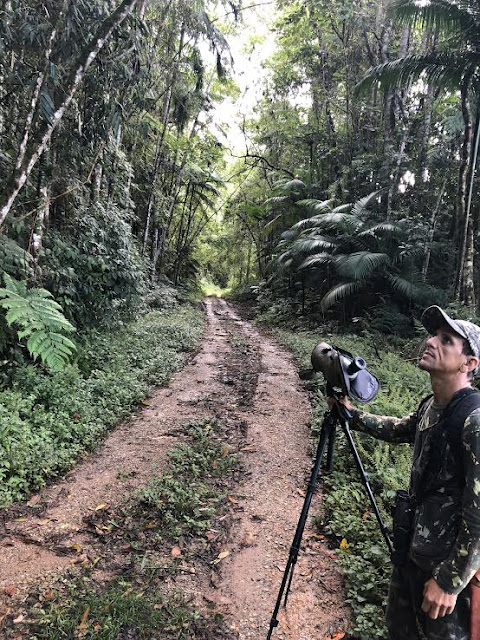 Other good birds later that day included RED-AND-WHITE CRAKE which finally came out to it's feeding station (we'd tried 5 times previously) and an ORANGE-BREASTED THORNBIRD at the same spot.  Nice birds and we still had owling ahead of us ...

The owling started out really well with a close view of a RUSTY-BARRED OWL followed by a long but ultimately successful hunt for BLACK-CAPPED SCREECH OWL.  Overall in two nights at Intervales we had 5 species of owl and 2 nightjars ... that's about as good as it gets. 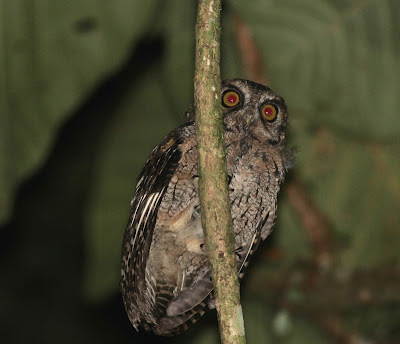 We also had a nice reminder that we were in a wild place ... we'd been stumbling around in the dark looking for owls for hours when we bumped into a Bothrops jararaca, a large and very venomous snake out hunting along the same trails.  Luckily our paths didn't cross too closely and it was a very pretty serpent, but makes you think ....