A way offshore pelagic from Brooklyn in July

Looking back at the blog, I seem to have stopped writing about my local birding and natural history adventures.  I guess the world-birder-travel stuff seems so much more exciting, and the local trips perhaps seems repetitive year-to-year.  But I still get out locally most weekends when I'm in New York, so here's something from closer to home.

For most of my 28 years living in New York, pelagic trips were an exercise in futility.  The gulf stream, warm water, and most interesting birds are a very long way from shore in New York.  In North Carolina you can be looking at a wide range of pelagic species an hour from the dock, but in New York you have to steam for 8 hours overnight to get into good water and stand a decent chance of seeing good birds.  For years, folks tried to see things closer in ... I chartered a few boats myself with mixed results ... and then an enterprising chap called Paul Guris got it all properly worked out.

Paul (and his better half, the lovely Anita) is a sea-birding impresario who puts together pelagic trips along the East Coast, mostly in New York and New Jersey.  In my opinion, he single-handedly turned New York pelagic birding from futile to productive over the course of the last five or six years.  Boats now get regularly filled, get out to good waters for decent amounts of time, and see excellent birds.  Indeed over the last few years, Paul's "Paulagics" have turned up Fea's Petrel, Trinidade Petrel and made previously mega birds like White-faced and Band-rumped Storm-Petrels and Black-capped Petrel into regular, gettable birds in New York.

This year the boat captains have been making things difficult but when the opportunity to sail on a July 'Paulagic' came up, I signed up quickly.

I should say straight up, I am not a good sailor.  I have been seasick on pelagic boats all over the world, and may unfortunately be semi-famous for it.  I have never been on a Brian Patteson trip in North Carolina without contributing to the chum line and have even failed to hold it together on the relatively placid waters of Monterey Bay.  But 'you don't look, you don't see' so I keep going, keep optimistically taking my dramamine (which unfortunately usually puts me to sleep for half of the trip) and keep soldiering on.  Sea-birds are important ... and cetaceans are even better.

So 9pm Sunday night and off we go again (how do you spend your Sunday nights?).  There's a certain amount of socializing on these trips as they gather together a broad group of New York birders who don't get to see each other every week, but I tend to try to find a quiet bench and spread my sleeping bag early.  Once I've taken my dramamine I'm down for the count, and sleep most of the night, but this time I was vaguely aware that it wasn't the smoothest passage out to the deep water.  Turns out we passed through several thunder storms and took a detour around others, but by dawn we were out where we wanted to be ... over 7,000 feet of water, 130 miles South of New York City.

As the sun came up, the steel gray waters were choppy and the smell of diesel and chum permeated everything on the boat.  I frankly felt somewhat queasy all morning, even passing on the egg and cheese sandwiches that they cooked up in the galley (and I love egg and cheese sandwiches).  But there's something special about dawn on a pelagic trip and, no matter how awful you feel, the excitement of being out there in the deep water takes over and we all staggered to the railing, ready to bird.

Leach's Petrels only show up close to dawn.  It's a strange fact and I'm not sure it applies everywhere, but on New York pelagic trips, the Leach's Petrels are typically seen early in the low light, and then vanish mysteriously.  I'm not sure why, or where they go, but for veteran pelagic birders, the first half hour on the chum slick is Leach's Petrel time and sure enough, they showed up on cue that morning.  A few Band-rumped Petrels showed up too so we got a quick reminder on ID by 'jiz' with the bouncing flight of the Leach's contrasting with the purposeful direct fight of the Band-rumped.

Then, over the next few hours we slowly filled out the list of pelagic birds.  The numbers weren't big, but we got most of the species we expected.  There were a few Great Shearwaters, a couple of Cory's Shearwaters and Audubon's Shearwaters along with a single Manx Shearwater surprisingly far offshore.  An hour or so in I picked up a fast moving back and white bird and called it, but blanked on the name, even though I knew what it was ... Black-capped Petrel.  This species used to be a 'mega' for New York but it's now seen regularly and annually on these trips so we've all gotten a little blasé about them.  Still, in global terms, a very rare bird and they are always fun to watch.  We looked out for it's even rarer cousins too, but it didn't happen that day.

Beyond the birds, today turned out to be a great day for cetaceans.  First up were a pod of Atlantic Spotted Dolphins, a good contrast to a later pod of Offshore Bottlenose Dolphins.  The stars of the day, from a dolphin perspective, though were undoubtedly a large pod of Risso's Dolphins that stayed close to the boat for a long time and gave great views. 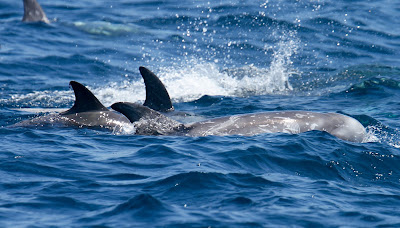 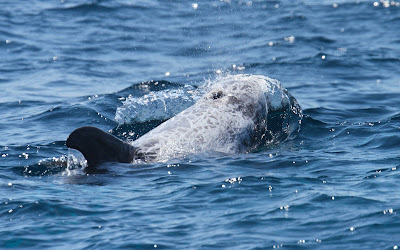 I also got a New York State life cetacean, a species I'd seen several times in North Carolina but nowhere else, when we bumped into a pod of CUVIER'S BEAKED-WHALES.  This species is a true oddity, with their white heads and goose-like 'beaks', they just look ... well, odd.  They are also famous as the deepest diving mammal species in any ocean (deeper then Sperm Whales, or even Elephant Seals).  That diving ability means that views are typically brief as when these guys dive, they are gone for a while, maybe 40 minutes before they surface again.  We were lucky then to get a decent view on the surface before they headed down to the depths.  A very cool species.

All too soon however, it was time to start making the long run back to shore with a plan to be back at the dock around 9pm.  They way in is often dull.  The die-hard birders persevere and may add a few things (a hammerhead shark sp. and a sea-turtle sp. in this case) but it's generally pretty birdless.  Being a cynical old birder, and high on dramamine, I usually sleep most of the way back in and that was pretty much the case that day.  When we got close to shore though, the weather started to look a little challenging.  We'd been avoiding thunder storms all through the trip, but as we got back closer to Brooklyn,  it was obvious that we were going to have to pass though one in order to get home.

Ahead of us was a wall of black.  The seas were blue and the skies were clear where we were, but we were going to have to go through some very dark and scary looking waters.  As we got closer everyone made their way down to the cabin and when we hit the edge of the storm, all hell broke loose.  From relatively calm seas the waters turned to ugly boiling churn with waves breaking over the bow and thumping down against the sides of the cabin.  It quite literally went dark, from day to night, and as the captain labored to keep the bow into the waves, our progress slowed to a crawl.  Then things got really ugly, a brush from a water-spout slammed the side of the boat and several of the large (12 foot by 3 foot) plastic windows on the boat cabin exploded out of their frames and crashed into the cabin with wind and waves blasting in behind them.  Scenes from the end of the Titanic movies came to mind, and there was me without my dinner jacket.  We did remain surprisingly calm though and I found myself pressed up against a window with other passengers trying to keep the remaining panels in their frames.  Everyone was soaked and a bit rattled but after a very tense 15 minutes or so, the maelstrom started to subside, the sky slowly lightened, and we passed out of the roaring waters and back to calmer seas.  Phew!  'Cheated Death Once Again' as my old friend Steve Howell is fond of saying on pelagic trips.  Definitely an experience ... but let's not do that again please.

So back at the dock and safely home an hour later.  While the trips can be a bit of a slog, the distances long, and the birding time short, you do get to see really good species.  Every time I get off the boat I think that I won't do another for a while.  Then the email goes out announcing a new trip, and I inevitably sign up ready for a new adventure ... who knows what we might see out there next time.

Posted by Welsh Birder Abroad at 9:41 AM