Hummingbirds and the Bogota Rail

A Spontaneous Trip to Bogota

At the end of my Santa Marta trip I was a little unsettled.  A hurricane that was threatening Miami had pushed me, at the airline's suggestion, into delaying my trip home and extending my stay an extra day in Barranquilla.  With no plans there though, I was at a loss as to what exactly I was going to do.  I pondered this dilemma over dinner with Daniel Uribe-Restrepo one night, and in the end decided that I was being way too literal and changed my plans completely.  I cancelled my flight to the US and booked a one way ticket to Bogota, asking Daniel if he knew guides there who might potentially be able to take me out for a day of birding.  He said he did and made some calls, and I jumped on the Marriott BONVoY app and booked a room at the W Hotel.  That was pretty much the extent of my planning for this trip ... sometimes it's good to be spontaneous.

Absolutely no plans today other than to relax and spoil myself.  I flew to Bogota and checked into the W Hotel, which was very trendy and quite fancy truth be told.  I had three main goals for the day ... pampering (gym and hot shower), good food/wine, and good sleep.  All three, I'm happy to report, were easily met either at the hotel or through the good offices of their concierge.

Tuesday, September 3 - The Andes around Bogota

So after my mini vacation, it was time to get back to work.  Daniel had made good on his promise and introduced me to a local guide named Diana Alcázar-Niño who had arranged for a driver and a day of birding in the mountains surrounding the city.  I set the alarm for some ungodly hour and met Diana, who turned out to be perhaps the warmest and most charming bird guide I think I've ever birded with, and the driver at the hotel lobby.  Then off, weaving through the dark pre-dawn streets of Bogota and out through the suburbs and up into the hills.

First stop was a site for a bird that I'd long been curious to see, the BOGOTA RAIL.   Not long after dawn we stopped in an area of dairy farms with lush green pastures full of friesian cows that would have been totally reminiscent of my home in Wales but for the colonial architecture of the farm buildings.  We had coffee and bread rolls, then hopped a gate and went through a farm field (Diana had permission) to a small pond and marshy area near a farm yard.  The grass was wet and as we got closer we flushed Grassland and Stripe-tailed Yellow-Finches and Eastern Meadowlarks from underfoot.  Then, as the ground got wetter still, we flushed a couple of Noble Snipe, signaling time to stop and scan for the rails in the marsh.  In the end, it didn't turn out to be a tough bird to see, and what we first picked up as a shadow creeping through the marsh vegetation eventually crossed an open space and revealed itself to be an over-sized Virginia-type Rail with a bright red bill and legs.  Scope views, and I was a very happy Welshman. 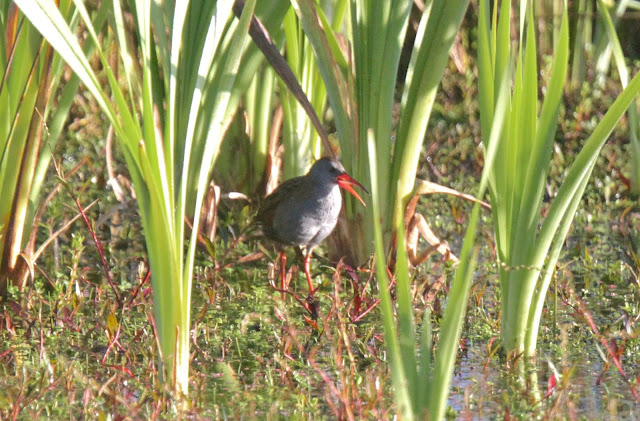 Well that was easy.  So back in the car and a fairly long drive through a confusing maze of farm roads brought us to site number two, the entrance road to PNN Chingaza.  We weren't going to have time to go into the park proper, and certainly not to really bird it, but looking at my target list it seemed that there were five (maybe 6) potential life birds that could be found along the entrance road.  So for the rest of the morning we worked our way up and down the first mile or two of road, birding pretty hard in search of our targets.

We started out really well with Purple-backed Thornbill and Glowing Puffleg feeding roadside at the second stop and a group of Silvery-Throated Spinetails working through the hedges just a little further on.  After that, it took only a couple more stops to hit target number four when we caught a glimpse of a small rufous bird flying across the road and were able to relocate it and identify a Rufous-browed Conebill.  At this rate I though we could maybe squeeze in a couple of extra sites but then, as so often happens, it took us a good two hours of patient searching to get a decent view of the fifth target the Pale-bellied Tapaculo.  It was worth it though, I love tapaculos. 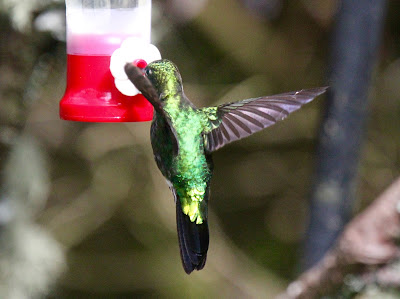 So, after lunch, time for one final stop and we headed over to the famous Observatory de Colibries.  I have to say, I was a bit suspicious that this sounded a bit like a tourist trap, and it did indeed have a gift shop and a place to get coffee and take a break from watching the 50+ hummingbird feeders spread through the beautiful gardens of a large house.  Ten minutes later however, I was hooked.  The place positively swarmed with hundred of hummingbirds of 13 species.  Finding them all, getting good looks and getting some photos was totally absorbing and quite enthralling.  Much more fun that I thought it would be.

Among the throng of Sparkling and Lesser Violetears, Tyrain Metaltails, Black-tailed and Green-tailed Trainbearers were smaller numbers of rarer species, two of which were life birds for me.  The Blue-throated Starfrontlet, a confection of irridescent pinks, greens, purples, blues, and golds, was just so colorful as to seem almost unreal.  In the end I think the subtlety of the copper/green/blue Coppery-bellied Emerald became my favorite but perhaps it was because it was shyer and harder to track down.

Among the other treats were more personal favorites.  I absolutely never tire of watching Sword-billed Hummingbirds, they simply leave me standing in awe, no matter how many times I get to see them.  The Great Sapphirewing has also become a personal favorite; a giant among hummingbirds, an spectacular in it's own right.

After finding the single Mountain Velvetbreast, we ended up turning our attention to the tiny bee-like woodstars.  Most seemed to be White-bellied Woodstars and it took us a good hour of careful searching to find the one Gorgeted Woodstar that had been reported there. 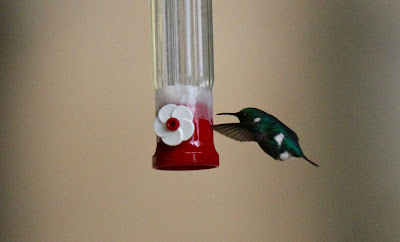 And so the day came to an end, and we needed to fight our way back through traffic to get me back to my hotel.  A wonderful day of birding, and an all too short visit to the Central Andes.  I will be back ...