A quick trip for ABA birds in Miami

When I was in Miami in February I saw an Aaratinga Parakeet on South Beach.  The trip was most definitely not a birding trip, and I had to list the parakeet as 'aaratinga sp.' as I saw it from a cab and couldn't stop to ID it properly, but it gave me an urge to come back and do a few days birding in the Miami area looking for some of the local specialties.

It took me a couple of weeks to get back but on Friday the 7th of March I flew back to Miami and arranged to meet up with Carlos Sanchez (local birding expert) for two days of birding in the Miami area.

An early start at the University of Miami Campus and a quick introduction that Miami is simply not like other cities.  Muscovy Ducks ("Florida Feral Type) loafed around the lake and a Spot-breasted Oriole sang loudly and obviously from a tree near the parking lot.  We also checked out local trees and bumped into a flock of Scaly-headed Parrots (not ABA-countable but apparently breeding locally in small numbers).

Buoyed by the easy oriole we headed off the the Baptist Hospital area in Kendall and a search for the local Red-whiskered Bulbuls.  Carlos has scouted the area a few days earlier and found a number of bulbuls, some even vocal, but we put a couple of hours in at the site and simply couldn't come up with one.  Oh well, we had another day to look so no panic at that point.  We did pick up more exotics though, adding Common Hill Myna, Mitred Parakeet, Yellow-chevroned Parakeet, and Egyptian Goose.  None countable in the ABA yet but all clearly well established and perhaps on their way to countable status.

Then on to a local office building to look for White-winged Parakeet (on the ABA list).  As we parked on a side street a few parakeets flew over us calling, and walking around the corner we came up to a breeding colony in ornamental palms around the entrance to an office complex.  The birds allowed close approach and plenty of photos so we dallied for a while.  I was liking the exotic birding thing. 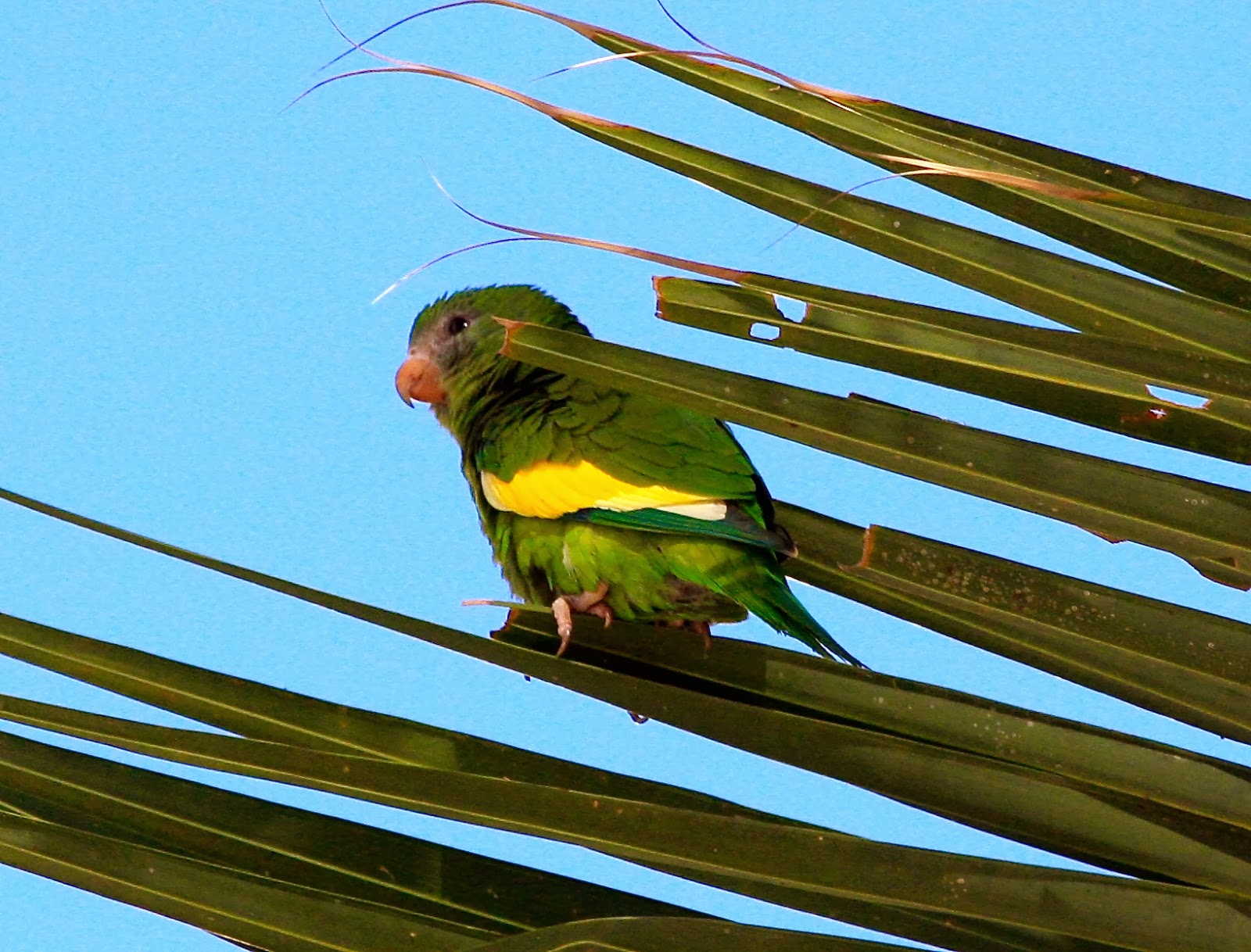 And then on to Matheson Hammock to look for the long-staying La Sagra's Flycatcher.  I had seen this species once before in the Bahamas but I have to admit that seeing it every day on my eBird ABA Rarities update email had made me really want to get this individual.  This is a species that shows up almost annually in South Florida but it is a Code 3 bird and so many other birders had seen it this Winter, and I really wanted to add it.

Arriving at the park we split up to look for the bird but before we'd gone too far I heard the flycatcher calling back in the mangroves and we circled back towards the parking lot, zeroing in on the call.  Before long the bird got came in closer and eventually popped out on some trees in the open at the edge of the picnic area.  We had great views/photos and, this being the only time during the morning that we saw other birders, we were able to get some other flycatcher hunters on to the bird (why aren't there more local birders here?).  Very happy to get this one so easily, a very cool bird. 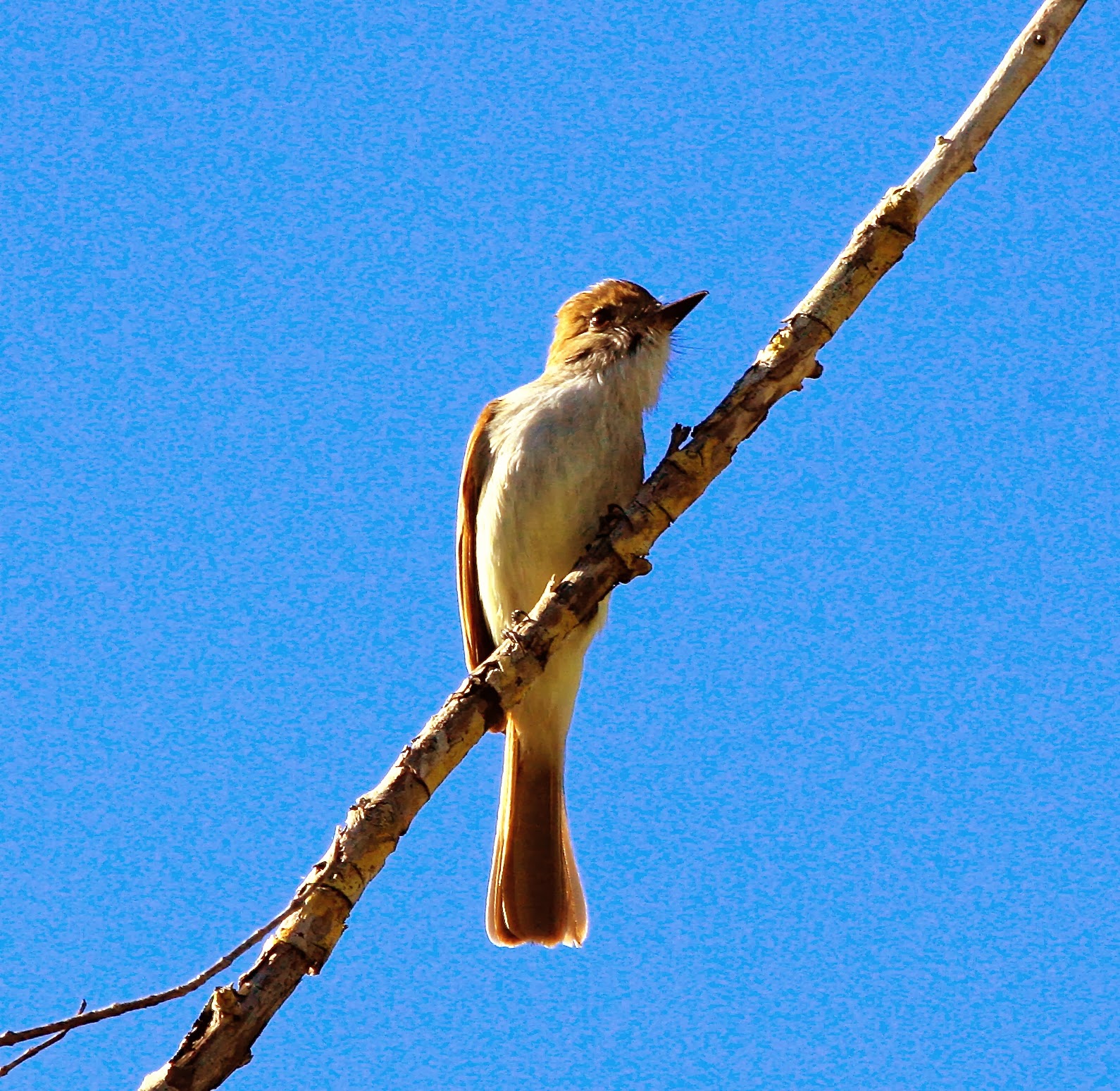 We finished our morning in Miami with three more stops in urban settings for good birds.  We had a group of Bronzed Cowbirds in a strip mall parking lot, some Common Mynas in yet another parking lot, and some Purple Swamphens in a pond near a bigger parking lot of another shopping mall.  All fascinating species (the cowbirds at least are naturally occurring and not introduced) but all good countable ABA birds.  The variety in Miami is truly fascinating even if the birding locations aren't exactly a 'wilderness experience'.  We did spend a lot of the morning in parking lots.

Postscript:  The ABA added Egyptian Goose to the official list in August 2014.
Posted by Welsh Birder Abroad at 6:17 PM