So this week's excitement was a small, multi-colored bird in Prospect Park, which despite not being all that rare, seemed to light up social media and draw lots of TV camera crews to the park.

The bird was found mid-week and quickly became a media sensation.  Every news station in New York sent camera crews and published the usual stories about birders 'flocking' and 'twittering' and 'chirping' about a bird variously described as "rare as a unicorn" and "once in a lifetime".  The reality is of course a little different, it really isn't all that rare (30+ New York State records), and even a number of males over the past few years.  But, it was a very accommodating bird, and lots of people got to see it, so I guess people could be given for getting so excited about this one.

I thought I wouldn't stoop to go and see this bird but on Saturday morning Nathan RemGold told me he was driving down from Cornell for the bird and I suggested he pick me up.  The bird was easy to get, you just had to find the scrum of birders 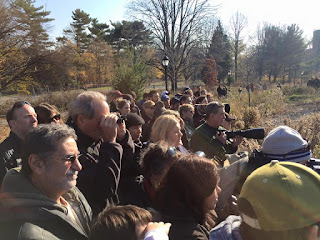 trying to see it.   It also gave great views, being almost completely oblivious to it's adoring audience and coming very close to the wall of bins and lenses.

While we were there, we adopted a reporter from Channel 12 News and helped her get some footage of the bird, and also edited her script for her report that day.  Lots of birders were being interviewed and getting some important messages across - the importance on native plantings in City parts, etc.  At least this will hopefully get more people into urban birding.

Update:
Went back on December 28th and took my camera this time.  Got some better shots of the Painted Bunting plus a bonus Black-headed Gull and Orange-crowned Warbler.  Not a bad haul for an hour in the park. 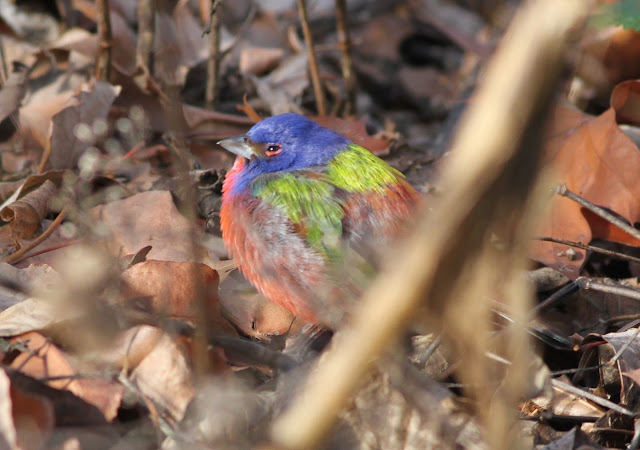