So this year I will bird more, I will take more photographs, and I will blog more.  I also plan to lose weight, quit smoking, drink less, and be a better person.  Perhaps there's a chance that some of these will stick past the first week of January ....

I love starting my year list in Montauk, and I love to start it sea-watching.  I must have started year lists at the same spot, freezing behind the concession stand, peering through my scope, on at least five occasions.  It's a great way to connect with nature and the elements and, if you can ignore the crowds of Korean Christians who gather at the Point for a Sunrise service of some sort, a proper outdoors experience.

This year, the sea-watching was quite good.  Hundred of Red-throated and Common Loons and a good mix of perhaps 5,000 sea-duck of 6 species.  I even managed 65 Razorbills my "annual" Dovekie, getting good scope views of one on the water.  Just when I thought it could get any better, I saw a puff of 'smoke' over the water and, swinging my scope around quickly, saw a large back and a pointed dorsal fin arch through the water.  Too big for a Bottlenose Dolphin, plus they done't blow.  No question what this was - a Minke Whale!  Only my second ever from land at Montauk.  It really did start the year off very well.

As the temperature started to climb, gloves came off, and I really started to enjoy a very good day of birding at Montauk.  Next on the 'good bird' list was an Ash-throated Flycatcher, a scarce Western wanderer that had been found by the folks doing the Christmas Bird Count the week before and had stuck around long enough for me to see it fairly easily.

While I was there though, I got some disquieting news - someone was reporting a Black Guillemot from the Point.  This is my nemesis bird at Montauk, despite all the hundreds of hours of sea-watching there, I have never seen one.  And they NEVER stick around!  By the time I got the email an hour had passed and so I was sure that I'd missed this one too, but while I was debating whether to backtrack and try for the Guillemot, another email came in - drake King Eider at the Point!  Oh boy, I should probably have stayed put at the point rather than running around chasing passerines.  So back in the car and over the Point for round two of sea-watching.

By the time I got there, there was of course no sign of the Guillemot (I'm cursed with this species on my local patch), so I joined up with some other birders and kept scanning, picking up a nice consolation prize when a drake Harlequin Duck came into view.  Once regular at Montauk, they've been scarce there of late so I was happy that I'd come back and found it.  Then, while the other birders were looking for the Harlequin, I finished my scan and bam - drake King Eider.  Such a spiffy bird, and another one not guaranteed at Montauk every year.  This one I did manage to get everyone onto - lots of smiles all around.

Happy with the ducks and feeling like I could head off again, some other birders told me about a nearby Lark Sparrow (another unusual Western wanderer) that I hadn't even heard about.  This bird was truly co-operative though and gave crippling views close to the road.  All in all I was very happy with my new year list and headed back to Northwest Harbor fully satisfied with a good start to the year.

My plan for the second had been to head back West along Long Island to look for a Tufted Duck and other waterfowl that had been reported during the week but, given how good Montauk was the day before, and still hoping to catch up with the Guillemot, I decided to go back to the point.  I met up with Isaac Grant at the Concession at 8am and started the whole sea-watch thing again.  And what a difference a day makes - no Dovekie, no King Eider, no Harlequin, no Ash-Throated Flycatcher, no Lark Sparrow, and needless to say, no Guillemot!

We really couldn't come up with anything all that good.  All the basic birds were there but none of the goodies from the day before.  The only new species we added all morning was an Iceland Gull that I'd somehow overlooked the day before.  It wasn't a bad morning, it just paled when compared to the mega list of birds that I'd assembled on Friday.  Nothing really seemed to be cooperating very much. 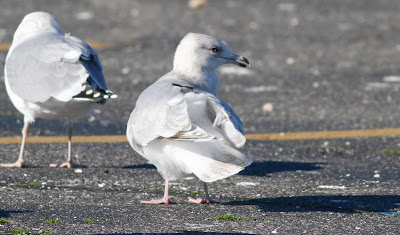 To add insult injury, the gloves were definitely back on today as the temperature had dropped and the wind had increased somewhat.  Not the best weather to be looking for flycatchers and indeed passerines of any sort were few and far between.

I even tried twice to see the Snowy Owl reported at Hick's Island but couldn't find it.  The only consolations were some Tundra Swans and a Greater White-fronted Goose at Hook Pond.

In the end I gave up early and went back home feeling like I should have stuck with the original plan.

Decided to stay local this morning and so just worked the Northwest Woods and Sammy's Beach near the house.  There weren't an awful lot of birds to be seen, although first of season Common Goldeneye and Brown Creeper were welcome, but it was a very pleasant morning to walk in the woods and I enjoyed the quiet time.  I had dinner plans in the City though, so I had to make a move and decided to try to do a quick stop for some good birds that had been seen in Western Suffolk County during the week.  I had the dogs in the car with me so I couldn't stop long but I figured I had perhaps a half an hour to spare so I could maybe make one, perhaps two stops if the birds cooperated.

First stop was Capri Lake where a TUFTED DUCK had been hanging out with a mixed Scaup flock. Finding the pond was fairly easily and as I parked I met up with Joe Giunta and crew and headed over to the lake.  As we walked up to the pond though a birder who was leaving had bad news - all the scaup, and presumably the tufted duck, had just flown off the lake.  Seeing as I was there already, we decided to check the lake anyway and maybe get some year birds and it was a good job that we did because the first bird we saw, floating in the middle of the lake with six Lesser Scaup, was the TUFTED DUCK.  Nice bird, and only two minutes spent so I had time for a one more stop.

Next stop was a quick hit to get a group of over-wintering Long-billed Dowitchers at Santapogue Creek.  Long-billed Dowitchers are surprisingly difficult in coastal New York, outnumbered thousands to one by Short-billed Dowitchers in migration they show up only in very limited numbers in Spring and Summer.  On the other hand they are much kore likely to show up late in the Fall and sometimes even overwinter, this flock having been present since November.  Although it took me a few minutes to find the site, the birds were easy to see and while I was there Menachim Goldstein gave me directions to a nearby Dickcissel.  Did I have time for one more stop?  Why not ...

That bird also surrendered quickly and was quite tame, almost oblivious to the hikers and cyclists passing quiet close to it.  Another 3 minutes on-site, and done.

So three stops in a half hour, three good species, and off back to the city.  A really good start to the new year and some nice species for my 'home' county.  On to new things ...