So peak migration!  The best three weeks of the year in terms of birding in New York, and so I changed my patterns to grab little slots of time in Central Park before and after work.  Year birding gets me motivated so I'm going to add the New York State year bird numbers to the new birds I add in these posts ....

On Monday I met up with Chris Cooper and spent a very pleasant couple of hours before work in the Park.  I have a Spring rule to ration my birding time - I either bird for two hours, or until I have 5 year birds.  On Monday, the two came roughly at the same time, starting with House Wren (198) and Blue-winged Warbler (199) at Strawberry Fields.  Then we moved on to the Ramble proper where literally hundreds of Yellow-rumped (Myrtle) Warblers swarmed every tree around the Upper Lobe.  The 'Rumps' were so thick that we both gave up looking for movement and turned to just trying to bird by ear, straining for chip notes, or snippets of song suggesting other species.  Black-throated Green Warbler (200) managed to have itself be heard about the 'Rumps' as did a single Prairie Warbler (201), but it was Chris who heard and tracked down the season's first Black-Throated Blue Warbler (202).  A very birdy morning and a great start to the week. 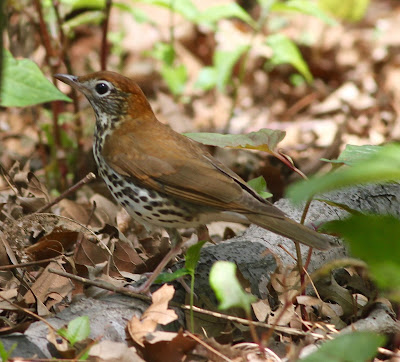 I was running a little late on Thursday, so skipped Strawberry Fields and went straight to the Ramble.  There weren't a lot of birders around, the weather was overcast and cold, and compared to Monday, there didn't seem to be a lot of birds.  I did check out the Ramble pretty thoroughly though, visiting each of the hotspots (and in Central Park every clearing, water feature or group of trees has a name) hoping for my five year birds.

While it was quiet, there were a few year birds to be had ... a Warbling Vireo (203) at the Maintenance Meadow and an Ovenbird (204) in Muggers Woods both joined the year list.  I also bumped into some photographers at The Oven who had a female Cape May Warbler (205) and picked up a Nashville Warbler (206) nearby.  That was four year birds so, in the hope of finding another, I headed over towards Bow Bridge, a good spot for an early Yellow Warbler maybe?  What I found there though was a group of about 25 birders with big goofy smiles on their faces, all chattering away.  At first I just drifted over to the edge of the group, trying to work out what they were looking at, but couldn't see any obvious target bird there, so I walked over the Chris Cooper and asked what was up.  The answer was quite a shock!

It turns out that the group had all just finished watching a SWAINSON'S WARBLER (207) over at Strawberry Fields.  The first Swanson's in the Park since 1990 and the first in the City (or New York State for that matter I think) since 2005.  This was a very rare bird .... and I hadn't heard about it.  Argh!

So, off to Strawberry Fields as fast as my dignity would allow .... I can move surprisingly quickly when I need to.  Rushing up to the 'Imagine Mosaic', a tribute to John Lennon, close to where he was shot and killed, I looked around for a group of birders and quickly found a bunch laying on the floor and crawling around the edge of some thorn bushes attempting to look underneath them.  As I walked up to them, I could tell I was in the right place and the warbler sang from the center of the bushes.  It was in there, just not visible from anywhere other than on the floor so, despite being dressed for work, on the floor I went and found myself staring at the target bird not eight feet in front of me.  Awesome bird!  What a start to the Spring. 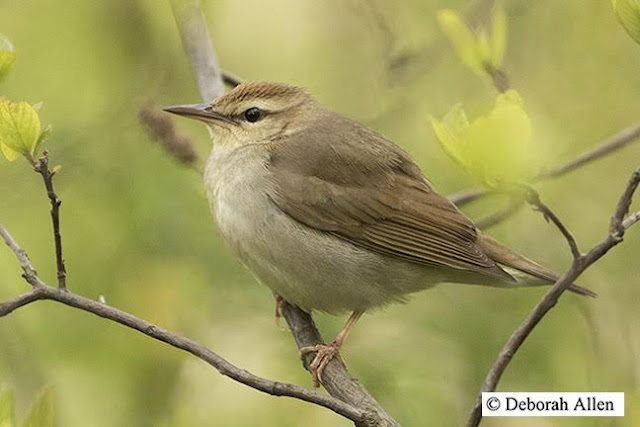 After the Brooklyn Painted Bunting, of course this bird also made it quickly to the mainstream press, and yes the word "chirp" was used again.  Here's the New York Post article and I'm sure there will be others.

Walked through the Park on the way home from work and added Yellow Warbler (208) and Rose-breasted Grosbeak (209) to the year list.

I spent all morning in the Park and worked really hard to get my 5 year-birds.  The first two were easy with Chestnut-sided Warbler (210) and Indigo Bunting (211) quickly joining the list.  I then joined up with Chris Cooper and rushed up to the North End of the Park following reports of Hooded Warbler and Orange-crowned Warbler.  We cheated and took a cab North but still managed to miss the Orange-crowned, although our luck was better with Hooded Warbler (212) and we got great looks at two of them.  Definitely one of my favorite warblers.  After a bonus Chimney Swift (213), I then spent the next three hours looking for year-bird number five, finally bumping into a Baltimore Oriole (214)  back in the Ramble in the early afternoon.  I worked hard for the fifth year bird!  Today felt like a bit of a slog at times, but we did get a bunch of good birds.  And on into May ... the best month of the year!

This day turned out to be interesting enough for its own blog post.