The weather forecast for Sunday was not encouraging, in fact it called for rain starting around 7am and continuing all throughout the day.  I'd originally planned to go out to the beaches but I eventually thought better of it and decided to grab a quick hour in Central Park before the rain came.

The rain started pretty much on schedule but it was light and tolerable.  In fact the rain probably helped keep the number of people down and while I birded from 6:30am to almost 11am, I saw very few other birders - unusual on a weekend in May.  There were also quite a few birds around, mostly Yellow-rumped (Myrtle) Warblers but I also saw two Worm-eating Warblers (215), my first American Redstart (216) of the season, and a total of 13 species of warbler overall.  While there didn't seem to have been all that much migration overnight, there clearly had been some movement as I also saw several Veery (217).   And then something special happened ... 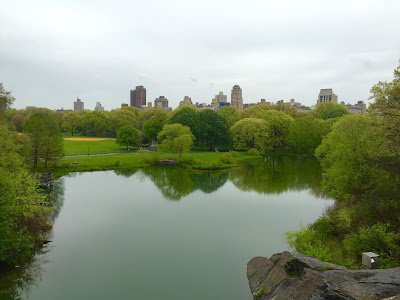 By 9:30am the rain was getting heavier so I went to the boathouse to rent coffee and buy something to eat.  I tried to bird back through The Ramble after that but I was getting wet - once again wearing shorts and sandals - and getting cold too.  By 10am I gave up and headed out via the West 77th Street entrance, planning to head back to the apartment and warm up.

As I was leaving the Park I noticed Karen Fung and Alexis Lamek (who until then I'd never met so knew only as the French guy who looks like Érik Ripert) intently staring at a bird.  As I came over Alexis asked me what I thought of the warbler, which promptly sang a song that sounded to me like a Black-throated Green Warbler song.  I looked up, saw black and white bird with a yellow head, heard the song and confidently identified it as Black-throated Green.

"But it has a black back" said Alexis

"Black-Throated Green doesn't?" I said, fumbling for my Sibley app on the iPhone.  Oops!

The long and the short of it is that, while we were expecting to see a Black-throated Green Warbler, the plumage was all wrong.  It had a black back, a plain white belly with little streaking, no yellow on the vent, a black nape that narrowed to form a line on the back of the head, and an otherwise clean yellow head.  The plumage was HERMIT WARBLER, pretty much solid on all the expected field marks.

The problem though was the voice, which didn't fit our expectations for Hermit Warbler songs. To be fair, the bird was high in trees, there were many warblers singing, and it was raining quite hard (i.e., not ideal listening conditions).  On top of that, none of us also had much experience with Hermit Warblers, at least on breeding territory.  However, the song I was hearing sounded like a series of slightly buzzy single notes - like the 'zee zee zee" at the start of Black-throated Green Warbler song and sometimes something that sounded like full Black-throated Green (add an additional phrase to the end).  While we were mostly getting just song fragments rather than the whole song, all of us had the impression of Black-throated Green song while watching the bird.  Most of the Hermit Warbler calls on the Sibley app. (which we played after losing sight of the bird to compare songs) start with a series of paired notes before a slurred second phrase, and I'm pretty sure I heard single rather than paired notes.  If I had a do-over I might have tried a recording, although I doubt I'd have got very much given the range and the rain.

Given our concern over the song not being right, I floated the idea, which seemed to make sense at the time (but seems stupid now) that perhaps it was a hybrid of some sort, but realizing that whatever it was, we had something good, we got the word out on Twitter and the State-wide Listserve.  And the bird promptly vanished ...

Luckily for us though Karen had managed to grab a couple of distant photos despite the rain, and they helped a lot in terms of settling our view on the ID.   In fact Karen gets a huge credit for somehow managing photos of a small fast moving warbler high in a tree ... in the rain ... with her back-up camera, with the two of us pressuring her to get a photo (by comparison, I'm a wimp - I didn't want to get my camera wet so I left it at home).

While the song was unfamiliar, I gather that there is a lot of variation in Hermit Warbler song and that they vary by area, and in the presence of similar species (e.g., Townsend's Warblers).  So not so impossible that a Hermit in the East might sound somewhat atypical.

So, while there will be some ID debate (especially given the confusion we spread with our initial struggle with plumage versus song), I'm pretty sure the bird we saw was a Hermit Warbler.  And, as I sit here on Monday I'm savoring a second amazing warbler in Central park in one week, and a second New York State life bird for me!  I also learned a humbling lesson about not making assumptions and studying birds.  I dismissed this bird based on song, and if Alexis hadn't been so persistent, would not have focused on it.  Alexis gets huge credit for finding the bird and sticking with it, bringing skeptical birders along to the right ID (which I suspect he came to a lot earlier on in the process).  A great lesson for me.

Unfortunately the bird was not re-found, meaning it was seen only by the three of us (and a handful of birders who passed through and saw the bird before we ID'd it).  There has of course been some local debate, especially given our comments on atypical song and on the presence of a darker auricular in one of the photos.  Karen was smart enough to post this bird on some national ID sites though and get the opinions of national/Western birders with more experience of the species.  Consensus seems to be that the plumage is good for a pure Hermit Warbler and most seem unconcerned about the atypical song (variation in Hermit Warbler songs seems to be widely experienced and expected).
Posted by Welsh Birder Abroad at 1:49 PM