The Week of Rain

It rained all day Monday and Tuesday and persistent North winds kept migration on hold.  I wasn't expecting much more in terms of migration on Wednesday but at least the weather forecast had a gap in the rain early in the morning, so I went into the Park at 6:30am.  It was raining .....

At first the birds were also really quiet, but it did pick up a little and briefly stop raining, before I had to leave at 8:30am to head to work.  I had a few warblers - Worm-eating, Blue-winged, Prairie, Cape May - and of course checked every Black-throated Green Warbler VERY CAREFULLY.  Best bird of the day was a Yellow-throated Vireo (219) one of a few species that had been present but eluded me all week in the Park.  Still waiting for the big wave of migrants .... any day now ....

No rain in the forecast for the first time in a week!  Thrilled to not be wet for once while grabbing another couple of hours in the Park before work.  Sure, it was still a drab cloudy day, with temperatures 20-degrres below normal, but it wasn't actually raining for a few hours.  There was a lot more bird song early in the morning but, apart from an obvious increase in Gray Catbirds, there wasn't much difference in terms of new migrant arrivals.  I did see 14 species of warbler and spent a little 'give back' time helping some beginner birders get their lifer Blue-winged and Prairie Warblers.  I also picked up a few new year birds including a somewhat cold and sad looking Ruby-throated Hummingbird (220) a single Least Flycatcher (221) and a very random Bank Swallow (222) drifting North across the Great Lawn. Things are slowly happening but still waiting for the big push ..... any day now ....

Just as I got home on Thursday night I saw a tweet from Adrian Burke reporting 3 Seaside Sparrows in a small park on 55th Street and the Hudson River (OK, that was unexpected ... there's not a lot of saltmarsh habitat in Hell's Kitchen!).  That's only 13 blocks from my apartment so I really should have walked up there right away, but at the time I was just too tired to go out again.  Of course on Friday morning when I woke up .... the rain had resumed ... and not just drizzle ... solid, heavy, business-shoe-ruining rain.  I lay in bed for a while debating whether to get up early and go chase these birds, and in the end I did go out slosh my way up to the park.  The habitat did not look terribly promising, this is a new park, essentially just an adjunct to the riverside running and biking trails that separate the West Side Highway from the Hudson River.  There was a small lawn, a handful of ornamental trees, and a border planted with small scrubby rose-looking plants.  The border was obviously the place to look and right there, feeding feet from the highway, were some American Robins, a Gray Catbird, a couple of Chipping Sparrows, and three very soggy and very out of place looking Seaside Sparrows (223).  A year bird, but also a new bird for me for New York County (essentially Manhattan).  Glad I got up, even if I did ruin a perfectly good pair of business shoes in the process.

Saturday, May 7 - Livingston County in Western New York
(Gets it's own blog post)

This was going to be the day!  The winds finally turned South on Saturday afternoon and the rain was finally forecast to stop.  Surely the migration would explode North on Saturday night and Central Park would be hopping with birds on Sunday morning?  Right?  Well ... yes....

Up at 5:30 and in the Park a little after 6am.  Good news was that it wasn't raining, but the Park didn't really seem all that birdy and early encounters with birders like Doug Kurtz suggested that perhaps we hadn't had a big migration event.  I did start picking up a few year birds though with Scarlet Tanager (229) and Lincoln's Sparrow (230) joining the list near Strawberry Fields.  Moving on to The Upper Lobe I added Swainson's Thrush (231) and Great Crested Flycatcher (232), plus a Spotted Sandpiper (233) at  Turtle Pond, but none of the species were new arrivals.  Had there been migration overnight?

The answer to this question came at about 7:15am when the skies opened unleashing a couple of hours of torrential rain, and all hell broke loose with thousands of migrant birds swarming North through the park.  IT WAS ON!

Over the next few hours I got completely soaked (I bird in the rain) but I also saw 22 species of warbler, adding Canada Warbler (234), Blackburnian Warbler (235), Magnolia Warbler (236), Wilson's Warbler (237) and Red-eyed Vireo (238) to the year list.  At one point, in torrential rain, I engaged a flock of about 50 warblers near Turtle Pond that contained 14 species ...  and dozens of other warblers passed overhead without landing and getting identified ... this is what makes Central Park so awesome in migration.

Given the obvious migration it was only a matter of time before someone found some other goodies.  I told Adrian Burke what there would be a Chuck-Will's-Widow somewhere in the Park that day (I'd glimpsed a bird earlier that I thought might be a nightjar but couldn't re-find it) but other goodies showed up first.  In fact Herons took a front seat for a while when Bob DeCandido and Deb Allen found an American Bittern and a Yellow-crowned Night Heron  (239) at the Point.  Both great birds for Central Park and both probably a little stunned to find themselves with an audience. 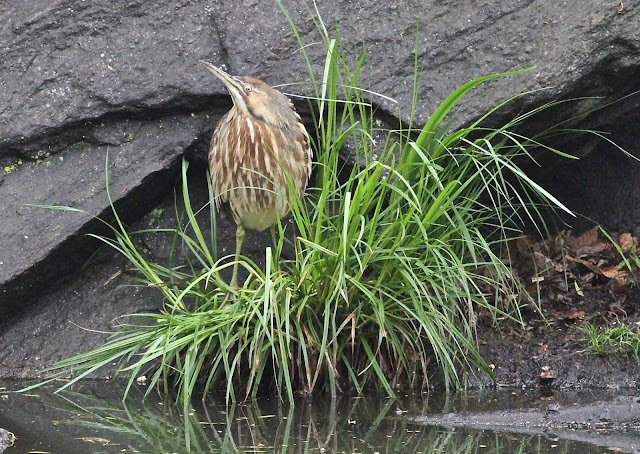 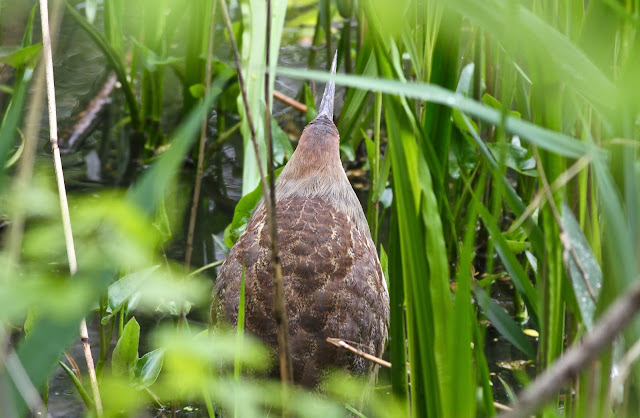 I was also lucky enough to bump into a Yellow-billed Cuckoo (240) before I had to leave, but eventually I had to go.  Overall, I had 82 species of bird in the tiny area that is The Ramble ... and of course, someone found the Chuck-Will's-Widow just after I left.