Sunday did in fact turn out to be the 'day of the year' in Central Park (and many other City Parks) with over 120 species of bird, and 28 species of Warbler reported in Manhattan's "Green Lung".   Monday was also very good, with many of the same birds remaining, but unfortunately I had to work that day.

Tuesday morning was beautiful, perfect weather setting off the amazing fresh green leaves of late Spring.  There were quite a lot of birds around too and I saw about 50 species, including 14 species of warbler in an hour-and-a-half on the way to the office.  I also added two year birds, ironically within seconds of each other, with a Solitary Sandpiper (242) flying by Bow Bridge and a Blackpoll Warbler (243) in a  tree overhead.  I also looked hard for the Summer Tanager, Bay-breasted Warbler, and Black-billed Cuckoo that I'd missed over the weekend but no luck there.  Plus I realized that I was still missing Orchard Oriole for the year ... fast becoming my Spring nemesis bird this year.
Thursday, May 12 - Central Park

Another gloriously beautiful day and a few more birds.  Bumped into a lot of birders in the Park that morning (including old friend and global conservation hero Nigel Collar of Birdlife International) and all agreed that it was really quiet.  I felt it was really quiet too, but at the end of the brief morning walk-through I'd seen 16 species of warbler, although mostly just 'onesies and twosies' with no particularly rare species.  Best bird of the day came as I walked into the Park and heard a distinct "Where -We" call from dense cover near the Upper Lobe.  No question what it was but I wanted to at least lay eyes on this Empidonax flycatcher for additional confirmation, and managed to get a brief look at this Alder Flycatcher (244) before losing the bird as it moved North.

Not long thereafter I saw a tweet about a Bobolink near the Delactorte Theater.  I was close so wandered over, heard the bird, and joined a small group of birders nearby who I assumed were watching it.
"Sorry, it flew North" they said.
"Nope ... it's right here, figured you were watching it" I replied.  And we all quickly repositioned and at least hear the Bobolink (245), the R2D2 of birds, singing high in a tree for a while.  Good morning.

But still no Orchard Oriole ....

Time for a break from Central Park so I picked up Michael Duffy at 6:30am and headed North to Doodletown Road in Rockland County.  There we met up with Tom Socci and spent a couple of hours working one of my very favorite birding spots in New York.

Doodletown is an old settlement that has since been abandoned and left to the woods to reclaim.  The remains of the roads are still there though, affording relatively easy, and tick-free (important in New York) trails into great habitat.  It's famous for it's warblers but all sorts of good mid-atlantic species breed here, and of course there were lots of birders there today too. 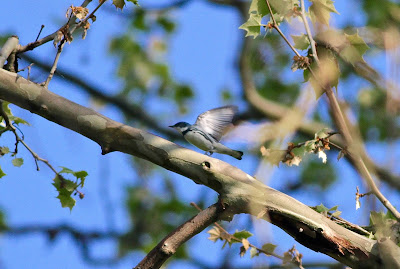 We started climbing the trail as soon as we got there and struggled to penetrate the wall of bird song that overwhelmed us.  Soon enough though we heard the distinctive buzzy song of Cerulean Warbler (246) and blocked out the rest of the chatter to focus on these star birds.  While we were watching then we also got a glimpse of the nemesis Orchard Oriole (247) but I was so focused on trying (and failing) to get decent Cerulean shots that I pretty much ignored it.  Further up the trail we had plenty of cuckoos, with at least five Yellow-billed Cuckoos and a single Black-billed Cuckoo (248).  I also heard an Acadian Flycatcher (249) but, with over 20 species of warbler in the bag, we then mostly focussed on getting Doodeltown's most desired warbler species.   We had good intel and headed to the spot where it had been heard singing the week before.  As we got closer, returning birders confirmed we were on the right trail and then, just before we got to the site, we heard a Kentucky Warbler (250) singing.  A few tense minutes of listening later, the bird broke cover and, quite uncharacteristically for this usually skulking species, sang loudly from trees right over our heads for five minutes.  Great bird.

After a quick, and unsuccessful, look for Timber Rattlesnakes - we'd bumped into superb all-round naturalist Rick Cech who gave us directions, but no luck - we decided to rush over to Sterling State Forest in Orange County while the birds were still singing. 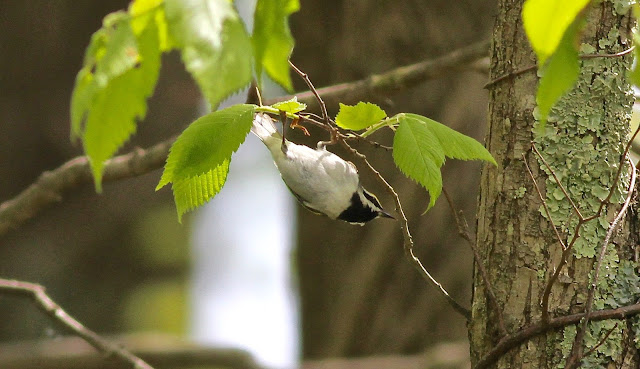 At Sterling we also had an unexpected bonus bird.  A Broad-winged Hawk (252) flew low over the woods and must have crossed close to a Barred Owl (253) nest, unleashing a storm of complaints from the owls.  Always good to get an owl in the day ...

Sunday, May 15 - Nassau and Queens Counties

I made a tactical mistake today and headed to the coast rather than going to Central Park.  Of course, all day the Manhattan Twitter Bird Alert buzzed with sitings of rare birds and now potentially missed year birds for me.  Bay-breasted Warbler, Mourning Warbler, Olive-sided Flycatcher, Philadelphia Vireo, and even a Common Nighthawk.  Oh well, can't get them all ...

I did have a great few hours at Jones Beach though, added a few year birds and got to see a nice smattering of migrants on what turned out to be a cold and windy day.  That at least kept Jones Beach's infamous mosquitoes at bay so the birding was chilly, but pleasant.

On the year bird front I quickly added Least Tern (254), Common Tern (255), Semipalmated Sandpiper (256), Semipalmated Plover (257) and a couple of fly-over Short-billed Dowitchers (258) at the Coast Guard Station.  Then I put the scope away and wandered off into the Median area in search of migrants.  There were actually quite a few to be had too, with Magnolia Warblers, Scarlet Tanagers, American Redstarts, Rose-breasted Grosbeaks, and a late Blue-headed Vireo all scattered through the pines.  Along the medians were yet more warblers, one group containing two Yellow Warblers, a Magnolia, a Prairie and a spiffy female Blackburnian.  Other goodies included a female Bobolink, a White-crowned Sparrow, and a Chuck-will's Widow (clearly the bird of the day for most). 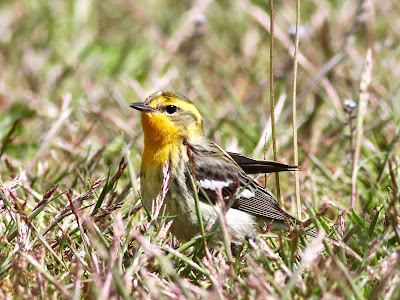 I also got a crash course in flycatcher ID when I spotted an Empidonax flycatcher, clearly a Traill's but looking all contrasty and big-eye-ringed to me (both good signs to Alder Flycatcher).  Looking back at the photos though, the bird seems to be less distinct, and given the habitat and location, seems more likely a Willow Flycatcher (259).

Next stop Jamaica Bay where visions of Tricolored Herons, Clapper Rails, Black Skimmers, were all to be quickly disappointed as the West Pond turned out to be almost birdless.  I did add some Least Sandpipers (260) and spent a lot of time looking for a previously reported roosting Common Nighthawk but alas, it wasn't to be, and getting chilled I decided to call it a day and head back to Manhattan.  I should probably have gone to Central Park instead, but hopefully some of those goodies will stick around into next week.

I stopped blogging the Spring, but I did add a few more year birds in Central Park before migration was over (although I did not take my camera) :

Gray-cheeked Thrush (261), plus one that I was worried that I was going to miss - Bay-breasted Warbler (262)

Tennessee Warbler (263), and a Yellow-bellied Flycatcher (264) and a Summer Tanager (265) that appeared at exactly the same place and the same time.

One last gasp for Mourning Warbler (266), plus lots of Eastern Wood-Pewee (267), and a clutch save on Olive-sided Flycatcher (268)

So overall I did pretty well.  35 species of warbler including two rarities (Swainson's and Hermit) and missed only one .... the striking, crowd-pleasing Prothonotary Warbler which just didn't show up in Central Park this Spring.  As for other Spring migrants, I missed Blue Grosbeak (which I could get as a breeder on Long Island) and a few random, not really expected, goodies (like a Least Bittern that showed up in Brooklyn).  But overall, I pretty much mopped up.  On to Summer ....