To the Gulf Stream and Beyond!

A Successful Pelagic Trip out of Brooklyn.

My track record with New York State Pelagic Trips has been mixed, at best.  One of the reasons I have such a terrible State List is all the pelagic birds I've been missing over the past few years, largely for lack of actually getting out on the water.  While I did go on a few trips back in the 90's, they were frankly terrible - trolling endlessly through a brain-numbing birdless dead-zone - but over the past few years things seem to be getting better out there, and so this year I figured I'd give it another shot.

To be honest, I'm not sure that the birds are getting better, rather I think the birders are getting a lot more knowledgable about when and where to go look for seabirds.  Paul Guris of Paulagics (really the only people doing group trips in the mid-Atlantic) in particular has been refining the New York pelagic trips that he offers and seems to be hitting more productive spots at more productive times.  The results have been impressive with several species, not really on offer years ago, now seemingly real possibilities on a group trip.   So this year I decided to give it a go.  I booked on the Winer Pelagic trip, which was cancelled due to weather, leaving me still needing Atlantic Puffin and Northern Fulmar for the State List.  So I tried the June trip, hoping for South Polar Skua, but that was also cancelled due to weather.   Then I rolled over my booking to the August trip ... and this one actually went out!

5am on Monday morning, and instead of crawling out of bed to go to the gym, a sharp poke in the leg from Nathan Goldberg (who'd spent the night sleeping on the metal floor under my comparatively luxurious plastic bench) woke me from a couple of hours of crappy sleep on a fishing boat 125 miles out in the Atlantic.  Time to go!  Hoping for petrels in the chum at dawn and, as the light slowly came up, we started a great morning of pelagic birding off the Hudson Canyon, in a 80-degree eddy of 'Blue Water' - perfect conditions for some gulf-stream specialties, and state birds for me.

Pre-dawn there ween't any birds to be seen while the crew busily chopped chum and started to lay a slick.  I did see a couple of squid come to the boat lights and some off gelatinous critters, some I thing were shell-less pelagic snails, one I had no idea but didn't really want to get much closer to.  Once the light started to come up though, revealing a flat sea with beautiful blue water and scattered sargassum weed, things started to get interesting.

Fist birds of the day were a couple of Leach's Storm-Petrels (283) bouncing around in the dawn light like crazy ocean nighthawks.  They were closely followed by some Audubon's Shearwaters (284), Cory's Shearwater (285), and a couple of Great Shearwaters (286).  Not a bad start to the day!
Next up came some BAND-RUMPED STORM-PETRELS (287) a NYS State bird (#388) for me and a few Wilson's Storm-Petrels (288).  And then a presumed Great Shearwater seemed odd and invited  a second look ... BLACK-CAPPED PETREL! (289) and another NYS State Bird (#389).  With the Band-rumps and more Black-caps, you could have been forgiven for thinking we were in North Carolina not New York, but I didn't really care because I'd just racked up 7 year birds and 2 State birds in a couple of hours.  Good times ..... 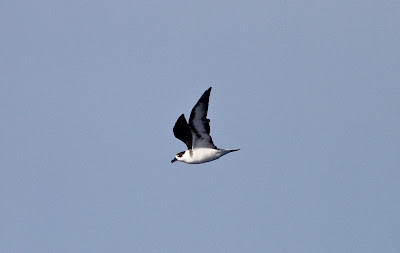 While the birding was pretty awesome, we also had some visits from groups of dolphins (I don't care how experienced a birder you are, dolphins in the bow wake makes a giggling kid out of even the most jaundiced old hand).  First up a couple of groups of Atlantic Spotted Dolphins, then a big pod of smallish dolphins that didn't easily fit an ID.  At first I thought they were going to be Short-beaked Common-Dolphins, then maybe one of the more pelagic species, but when we got closer we realized that these were STRIPED DOLPHINS ... a life mammal for me (and I'm guessing for most others on the boat as they were only the second sighting ever for Paul Guris!)

With everything going so well, the next episode was a bit of a turn around that soured the mood of most of the participants on the boat, at least for a while.  A few of us got glimpse of a small gray petrel low to the water, and Tim Lenz, looking at photos of an Audubon's Shearwater, noticed another bird photobombing his shot ... a WHITE-FACED STORM-PETREL.  There was lots of chatter and everyone was rushing to the other end of the boat, so I assumed that people were on the bird, but apparently not, and long story short ... only 3 or 4 people got views of the bird, and 50+ people were very unhappy.  Awkward ....

White-faced Storm-Petrel was a major target for the day, seen in New York only a handful of times ever (and indeed almost never seen in the Western North Atlantic away from a single Massachusetts pelagic trip that has been 'the place' to see this species historically).  Recently, there had been a few sightings in New York waters, and this trip was largely designed to have a chance at this rare (ABA Code 4) species.  The fact that some had seen one, and in the confusion not called it out, made some people very unhappy and much grumbling ensued.  Things soon blew over though and everyone got back to looking for seabirds.

So having been guilty of not shouting out (what was at best a 'maybe' sighting of) the bird, I set myself to make amends and scanned intensely for another one.  About an hour later I saw a small gray bird heading towards the boat, got bins on it, then proceeded to yell like a mad man ....

And people sort of got the point (it's hard to ignore a large Welshman bellowing at the top of his lungs), and the captain was able to keep us close to the bird for a good ten minutes so everyone got amazing looks at what I'm sure was a lifer for many (followed by a second bonus bird for good measure).   WHITE-FACED STORM-PETREL (290) and NYS State Bird (#390). 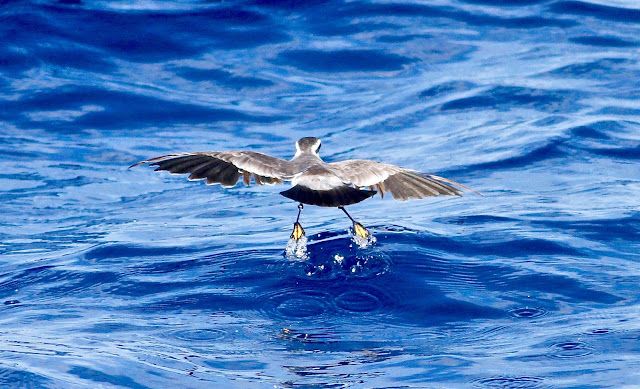 So what do you do to top three White-faced Storm-Petrels?  Well apart from an Albatross, there really isn't much you can do, and besides with a seven hour run back to the dock ahead of us, it was time to head to shore.
So back to Brooklyn we went, and I took the opportunity to get a long nap after a largely sleepless night.  From time to time I'd wake to a scramble where someone outside had called a bird out (causing nappers from the cabin to run outside, usually too late to see anything) but the ride in was not terribly eventful bird-wise.  There were however lots of other critters, most notably over 300 SHORT-FINNED PILOT-WHALES in scattered groups, but all basically lounging that surface.  Then there were some other 'non-avian' highlights ... a large Hammerhead Shark sp., a Loggerhead Sea-Turtle, a breaching ray, a breaching Basking Shark, flying fish, etc.  So much life out on the ocean ...

And so all too soon the adventure was over.  But everyone was thrilled with the day, and I can't wait to get out there again.  New York is redeemed in my mind, no longer pelagic bird-dessert, this had been a really high quality pelagic trip.

Special thanks to Paul and Anita Guris for organizing, and for the various spotters for helping get people on birds.  Now if only I can actually get some calm weather to finally get the damned Atlantic Puffins on the New York State List !