Last Gasp for Shorebirds and a Hurricane Of Sorts

Well after a spectacular pelagic trip, and three State Birds (plus 8 year birds) I turned my attention back to New York State year birding.  I'd set a goal this year of 300 species in the state (after the pelagic I was at 290) and staying in the Top 10 of the "Hot 100" top eBirders for the state this year (before the Pelagic, I'd dropped to 10th.  Two things quickly sunk in:

1. It's going to take a lot more than 300 species to stay in the Top 10 this year, lots of people seem to be birding hard so I'm guessing 310 or 315 will be required.
2.  I'd almost completely missed shorebird season (and most of tern season) so had missed a dozen relatively easy birds to add to my list.

So how to salvage some birds.  Step one, off to Jamaica Bay on Friday morning for a mid-morning tide and hopefully some catch-up shorebirds.

Heading into the East Pond (with my super cool French knee-high mud-boots and lots of sun-block and bug spray liberally applied - I felt very prepared) it was quickly obvious that it wasn't going to be an amazing shorebird day.  There were lots of Semipalmated and Least Sandpipers, quite a few Short-billed Dowitchers, and a scattering of Oystercatchers, both Yellowlegs and a few Semipalmated Plovers ... but not much of the good stuff. 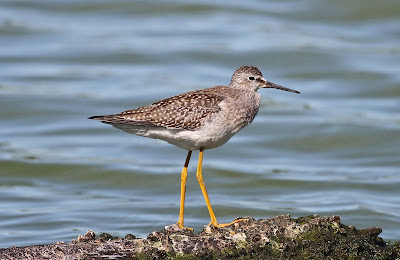 But patience is a virtue, so over the next three hours I slowly worked North along the East side of the East Pond and scoped every single shorebird I could find.  And that kind of thorough scope work, does produce, adding a single WESTERN SANDPIPER (291), two WHITE-RUMPED SANDPIPERS (292), a PECTORAL SANDPIPER (293) and a solitary juvenile STILT SANDPIPER (294).  I was hoping to come up with a Baird's Sandpiper too but one one eluded me, still four year birds was worth the long walk in the mud.

Apart for the shorebirds, there was the usually selection of gulls, ducks, etc.  plus a very aggressive Peregrine Falcon that delighted in torturing the shorebirds at regular intervals.  Birds of the day though were probably two CASPIAN TERNS which were my first ever at Jamaica Bay and my first for Queens County (#235).  Always good to add a county bird.

With the dogs in the car, and plans in East Hampton, the idea of birding on the way out East on Saturday was a bit impractical, but having made good time on the drive out, I figured I could grab a half hour to see if I could get some of the recently reported "grasspipers".  For this to work though, it had to be a 'surgical strike' so I ran up Doctor's Path and crossed Sound Avenue, as much hoping for birders with scopes as actual birds (I really didn't have time to do thorough scans).

Today my luck was in, I bumped into a group of birders who'd found a flock of birds including many Killdeer, Semipalmated Plovers, a BUFF-BREASTED SANDPIPER (295) and two BAIRD'S SANDPIPERS (296).  This group also had heard rumors of plovers over near Osborne Avenue so, not three minutes after jumping out to scope their birds, I was on my way again looking for my third target.  As it happens, I didn't quite make it to Osborne Avenue, as just before I got there, I passed a field full of 50+ AMERICAN GOLDEN-PLOVERS (297) ... and I was on my way again in under 25 minutes.  Efficient listing ....

Now, I was on a roll so, after I dropped the dogs off at the house, I decided to see if I could find a lingering Roseate Tern at the Fish Traps (a spot where terns hang out) at Sammy's Beach near the house.  There was in fact a ROSEATE TERN (298) there along with 50 Common Terns and a surprise of two ROYAL TERNS (299) a bird I've never seen at Sammy's Beach before.  And at 299 I obviously wanted to end the day at 300 species to checked a few more local spots before setting up for a nighthawk vigil (someone I've done many nights so far this year without luck) and was rewarded this time with a COMMON NIGHTHAWK (300) at dusk.  Perfect birding day.

The weekend forecast has been wind and rain, but Hurricane Hermine was staying well offshore and not really producing the kind of weather that leads one to expect storm-driven seabirds.  Still, it's always worth sea-watching so I slogged down to Amagansett on Monday morning and put in a three hour sea-watch over messy, swirling surf in decent, but hardly storm-force, winds. 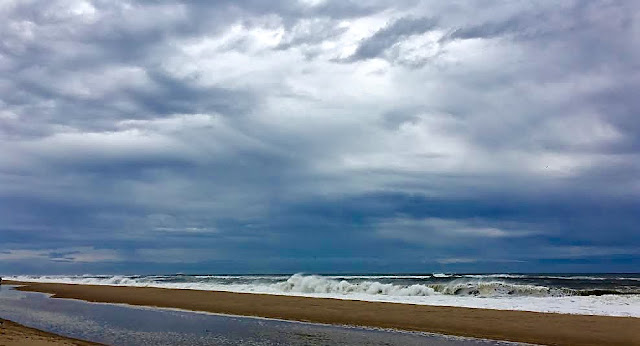 It was obvious pretty quickly thought that something was up.  Being the swirl of gulls offshore there were tubenoses moving, but most were too distant and to too briefly seen to identify to species.  Over the course of the watch though I did pick up a couple of Cory's Shearwaters, 2 Sooty Shearwaters (301) and a single Manx Shearwater (302) plus some gannets, and a Parasitic Jaeger (303).  All good sea-watch birds Out East, but soon quickly eclipsed by a bird that I immediately 'felt' was a pterodroma based of flight style.  The bird arched and power glided effortlessly across the waves, making the shearwaters look sloppy and sluggish by comparison - brown uppers, dark heard, and a big white rump could mean only one of two things and as the other one was too super-rare to really consider seriously, I went with BLACK-CAPPED PETREL (303), a very, very good bird from land in New York.

Turns out that others were having a good day too, and others also had shearwaters and Black-capped Petrels.  Ironically, the weather didn't really suggest a great sea-watch day, and birders closer to the city struck out.  Right time, right place I guess ... until I heard about the booby!

Turns out that Nadir Souirgi, who was just a few miles to the West of me, had an adult BROWN BOOBY pass him, heading East.  That would have been a state bird for me, and a very much wanted one ... but alas I never did pick it up and missed out on what was probably the best bird of the day.  Can't win them all I guess ....