A Weekend in Australia

A Quick Trip to Perth and a Great Weekend of Birding

You know you've been flying too much when the idea of going to Australia for the weekend seems reasonable.  True, I was in Singapore, so Perth in Western Australia was only a five-hour flight away, but still, that's an awfully long way to go for a day and a half of birding.  My original plan, knowing that I had only from Friday night to Sunday night free, was to go to Way Kambas in Sumatra.  That plan fell through though and some on-line research revealed that yes, there were direct Friday and Sunday flights to/from Perth.  So all I needed then was a guide (a day and a half in an unfamiliar continent is no time to be "working things out") so when Peter Taylor from Birding SouthWest replied to an email to say he could guide me that weekend, I had a plan.

Singapore Airlines is one of my favorites and everything went like clockwork on Friday night, leaving me exhausted but excited in a hotel in downtown Perth by 1am.  The alarm was set for a very civilized 6am for a 7am pick-up and, at the appointed hour when we met, I was happy to accept Peter's suggestion that we "head for the hills" to start our day.

It's been a very long time since I was in a place where almost all the birds were completely new to me.  What was that thing that sounded like a baby goat?  What about the large black things that flopped along like kites or fruit bats?  Was that a Kookaburra?  Kangaroos!

First stop was Victoria Dam - and poor Peter had to put up with me being a lost kid, with a big goofy smile on my face soaking up the new and unfamiliar.  It was a truly awesome couple of hours wading through the blizzard of new birds, mostly new genera or even families.  The goat sound was Australian Raven.  The floppy fruit bats .... Red-tailed Black-Cockatoos.  Yes, there were Laughing Kookaburras, but apparently they aren't native so not a good thing.  And yes, there were Kangaroos ... two Western Gray Kangaroos hopped casually across the trail in from of us and off into the Eucalyptus woodland.  How Australian was that?  I was thrilled. 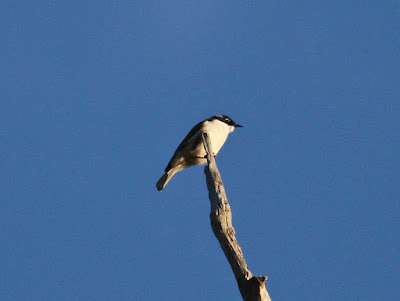 We walked down to the dam and then on to the picnic area and new birds came at me fast and thick.  There were Red-capped Parrots and Western Rosellas, Brown, Gilbert's and New Holland Honeyeaters, White-browed Scrubwrens, Western Thornbills, Western Whistlers, Weebills, Red Wattlebirds, Gray Fantails, all sorts of cool unfamiliar things.  We paid special attention to Fairywrens and even though most were in eclipse plumage I was thrilled to see lots of Splendid Fairywrens and a couple of Red-winged Fairywrens.  Australian Robins were also very endearing, with Scarlet Robin and White- breasted Robin at the camp ground along with adorable Red-eared Firetails.    Just a wonderful 2 hours and 7 minutes (from eBird).  A really great way to start my trip and if I had any regrets, it's only that it occurred to me right then that I would never again have a first morning in Australia. 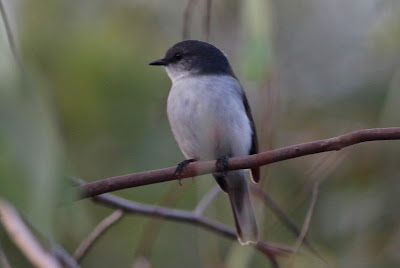 Next stop was further up into the hills surrounding Perth and as we worked our way into Collins Road in Beverley I got another wave of new birds.  As soon as we got out of the car we had Rufous Treecreepers (not at all like the treecreepers I'm used to), Gray Shrikethrush (neither a shrike nor a thrush), and White-browed Babblers (you guessed it, not a babbler).  Other goodies there included Blue-breasted Fairywren, Spotted and Striated Pardalotes, Restless Flycatcher, and Western Yellow-Robin.  By the time we stopped for lunch I'd probably had 50 life birds.  Totally overwhelmed, but definitely not complaining. 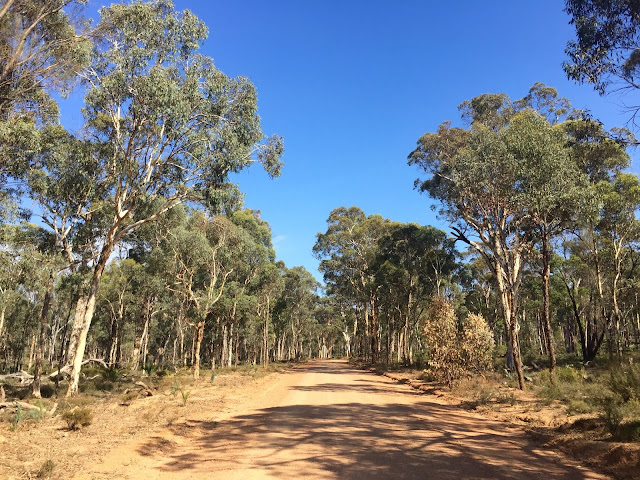 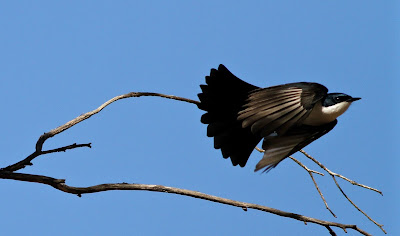 In the heat of the afternoon we switched over towards water birds and had a really great selection of ducks, shorebirds, wading birds and others at Bibra Lake and Alfred Cover Nature Reserve.  By the time Peter dropped my back at the hotel at around 7pm, I was exhausted.  Plans for exploring Perth were replaced by room-service and a hot bath ... hey, I had a lot of life birds to absorb.

Up and at 'em again on Sunday morning.  This time starting in sand dunes at Floreat Beach.  The targets here (two more Fairywren species) would not cooperate but there are worse places to dip things than standing on a beautiful coast watching Common Bottlenose Dolphins, Parasitic Jaegers and Australasian Gannets from the beach. 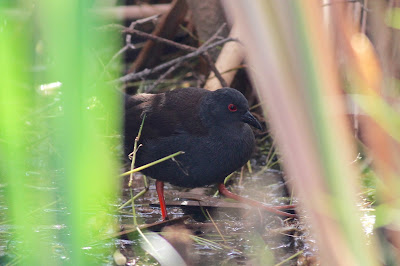 The rest of the morning was taken up by the wetlands of Herdsman Lake where we had a huge variety of super tame waterbirds to keep us amused.  Freckled Duck was the star bird rarity-wise for good looks at Spotless Crake, Buff-banded Rail, Rufous Night-Heron and Yellow-billed Spoonbills were all memorable moments for me.

After a last stop at King's Park - a wonderful Victorian park with large areas of native vegetation between the ornamental planting and heroic statues - my time had unfortunately come to an end.  Back to the airport and back up to Singapore.  This trip was not nearly long enough but I was faced with a choice ... two days of Australia or no Australia ... and I gather it's possible to get direct flights from Singapore to Darwin .....