A Mad Scramble to 'Do' Spring Migration in New York

Back from three weeks in Asia at the start of May and checked in to see what I'd missed in New York.  Turns out that migration was well underway and in fact I'd missed a good early push, so much so that when I checked where I was on the "Hot 100" for the year in New York State on eBird ... I wasn't even in the top 100.  So some catching up to do ....

So into a routine.  Up at 5am, neglecting the gym (it's not pretty) and spending a couple of hours in Central Park each morning before work, then occasionally hitting the park, or another, after work for an hour to chase a specific bird.  The weekends I jumped in the car and ran around in the counties just outside the city to add more birds.  Over the course of the first three weeks of May I added 93 species to the year list, all basically in or around New York City (and yes, as of today I'm back in the Top 10 of the "Hot 100" which means I'm basically back in with the pack.

Most of the month was actually pretty flat, with Northerly winds slowing migration to a dribble, but there were a few epic days that even the old-timers had to agree were amazing.  I saw nothing particularly rare, and am in fact missing several species that I could have seen had I been here for the whole migration, but there were some memorable moments.  A Kentucky Warbler in Washington Square Park briefly became a local celebrity with the local drug dealers (just selling loose joints, nothing dramatic) asking us if we were looking for the 'Little Kentucky Bird".  Several Bicknell's Thrushes were reported, and I even chased one but didn't see it (I've never seen one away from breeding territories), although I did have a nice consolation views of singing Gray-cheeked Thrush.  I also had several Summer Tanagers, a Blue Grosbeak, a couple of Olive-sided Flycatchers and 31 species of North American Wood Warbler (which means I'm still missing 3 or 4 possibles). 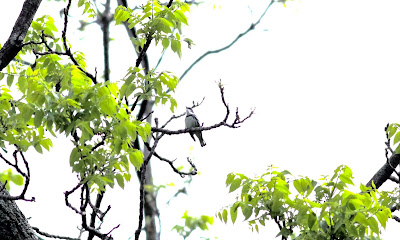 Among the day trips.  A very wet swing through Albany, Schoharie and Otsego Counties in a rain storm provided American and Least Bitterns, Virginia Rail and other marsh birds.  A trip to Rockland and Orange Counties yielded Golden-winged, Cerulean and Mourning Warblers (plus a second Kentucky Warbler) and Acadian Flycatcher.  Ulster County chipped in grass birds like Bobolink and Grasshopper Sparrow while Suffolk County gave me Vesper Sparrow.  Queens County gave me Little Blue Heron and some shorebirds, and I was even able to pick up some county birds like my first Purple Sandpipers for New York County.  The tapestry of a Spring Migration year list slowly coming together. 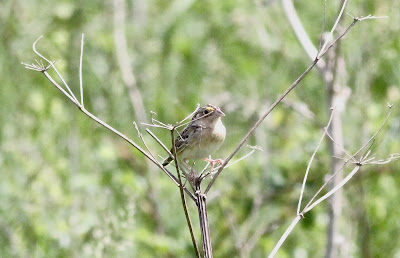 So after the craziness, back to a more stable routine.  This morning I got up at 5am and went to the gym, ignoring reports of Bicknell's Thrushes (which I never see anyway).  Feeling like I'm pretty much caught up now so I can focus on rarities and travel and don't need to be running around quite so much.

Postscript:  within days of my writing this, and stopping the mid-week birding and going back to work (and the gym) both a Swanson's Warbler and a Henslow's Sparrow showed up in or close to the City.  I've seen both before in New York but both are VERY good birds here and I wasn't able to go and see either.  Oh, and several Bicknell's Thrushes showed up too .... you can't see everything ....