October 2018 got a little confused - I had had an October trip planned to Asia for months and was looking forward to trying for Mountain Peacock-Pheasants in Malaysia and for Whiskered Pitta in the Philippines.  Then, just weeks before I was due to leave, the trip got cancelled and I had to try to un-book the travel arrangements.  No sooner had I said my apologies though, and cancelled all the ground arrangements for the trip, than I got word that schedules had changed again and that I was indeed free to go to Asia if I wanted!  It was too late to save the Malaysia part of the itinerary, but I was able to resurrect the Philippines trip (more later) and had a single spare day in Hong Kong so reached out to birding friend and local bird guru John Allcock to make plans for a day of birding, including a visit to the fabled Mai Po reserve.

So super early, up and out of the hotel and off to the New Territories to meet John.  First stop was a woodland trail at Shek Kong which, given the date, we hoped would be crawling with interesting migrants.  It wasn't.  In fact it was pretty dead bird-wise, but oh well, never mind, and on to the next spot.

Kam Tin is not the most scenic birding area on earth.  A muddy storm drain full of discarded tires and shopping carts surrounded by concrete banks and overpasses.  It is a wetland though and so draws lots of wetland birds with a good selection of shorebirds and egrets spread up and down the muddy channel.  Our target here was the scarce and declining Gray-headed Lapwing, a lifer for me and a bird I'd looked for unsuccessfully at this site the previous year.  We got out of the car, I scanned the channel, picking up a good selection of birds but no lapwings, but thankfully John was more thorough and picked out a pair in the distance.  So, a life bird, and the day was starting to look up.

Up next was another site I'd birded before, the farm fields and paddies of Long Valley.  Our goal here was to look for scarcer buntings amongst Yellow-breasted Buntings in the dry rice fields and see if we could turn up a rarity or two.  We ended up not finding anything very different but I did get another life bird when we flushed a Lanceolated Warbler a couple of times; a tiny, mouse-like, skulker but very welcome on the list.  And now onwards and time for the main event.

Mai Po is world famous.  The marshes, fish ponds and mud flats of the reserve have been intensely birded and studied for years (a function of there being British birders in Hong Kong) and are legendary in birding circles.  I had actually been there once before but, lacking the correct permit, had not been able to access the best parts of the reserve at the right time and had seen very little.  This time I was properly permitted and birding with a local expert so my expectations were high and I'm happy to say they weren't disappointed.

Over the next six hours we saw more than 80 species at Mai Po, including 4 life birds for me.  On the way to the mud flats we worked our way through the fish ponds and found Black-browed Reed Warbler, Pied Harrier and Collared Crow, all of which were life birds for me.  We also flushed a bird that we were pretty sure was a White-browed Crake, a mega-rarity in Hong Kong, but were unable to re-find it so had to let the record go.  Then we spent several hours enjoying some of the best shore birding there is on offer anywhere in the world.

The mud flats at Mai Po are viewed from floating hides at the end of long boardwalks that lead out through the mangroves to the shores of the Pearl River.  The mud was quite literally covered in birds, and with a rising tide we took our places in the hides and started to study them as they got closer and closer.

Wading birds were initially most obvious with three species of egret, several herons and the globally endangered BLACK-FACED SPOONBILL all feeding out on the mud.  Beneath them though was a carpet of shorebirds ranging in size from the larger  Eurasian Curlews, Whimbrels, and Black-tailed Godwits down to the smaller plovers and sandpipers running between their legs.  The reserve was famous for a trinity of very rare Asian shorebirds that would all have been potential life birds to me - Nordmann's Greenshank, Asiatic Dowitcher and Great Knot - and while diligent scanning didn't pull out either of the first two, we did find a couple of GREAT KNOT, a bird I was very happy to finally add to my list. 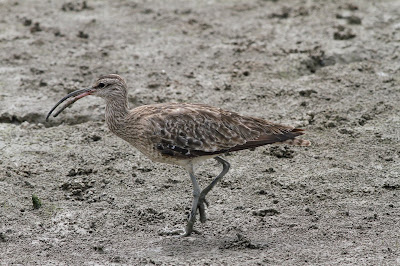 We also managed another bird that was interested for me when we found a Long-billed Dowitcher, a bird I think of as North American but apparently they breed in small numbers in Asia too.

The greatest excitement of the day though was when John, scanned through the hundreds of Pacific Golden-Plovers handed me the scope and said, "what do you think about this one?".  He knew the answer already of course, the eye-pattern was different and a sort of breast-band effect strongly suggested EUROPEAN GOLDEN-PLOVER, only the 3rd one ever recorded in Hong Kong!

So a great day, and with a few hours to kill we headed over to the San Tin fish ponds to see if we could add a few extra species.  We weren't expecting to top the excitement of the plover but not 10 minutes after arriving we stumbled into another rarity, Hong Kong's 4th record of BOOTED WARBLER which we flushed from some grass and managed to get a few record shots of.  Truly a great day of birding and all in one of the most densely populated places on earth.