Another Quick Trip to the Philippines and More Endemics on Luzon

I'd managed to escape from a business trip in Hong Kong on Thursday night, hopped a quick flight, and once again found myself staying near Manila airport, exhausted but ready for more Philippines birding adventures.  This was going to be another super quick trip as I had to be back in Hong Kong on Sunday afternoon to catch a flight to New York, but hopefully I was going to get a chance to see a few more of Luzon's endemic birds before then.  This time I was with famous Robert Hutchinson, one of the owners of Birdtour Asia and a long time Philippines resident.  We set off very early on Friday morning missing most of Manila's legendary traffic and arriving at our destination well before first light.  Jariel's Peak is a apparently local beauty spot and we planned to spend a day and a half birding there but as we'd arrived in the pitch darkness the views were going to have to wait.  Besides, I was more interested in owls.

We had a specific target in mind so started stopping and listening for owls, hoping for a Luzon Scops-Owl.  We heard Philippine Scops-Owl and several Philippine Nightjars but for a time our target eluded us until Rob heard one calling and was able to use his fancy night-scope to see where the bird was.  Even though we knew which tree it was in, and it's location stood out in the green glow if the night scope, the bird was hidden from me and it took a while before I caught some movement, fired off a volley of shots into the darkness and got a photo .... it may be out of focus, but it was a life bird nevertheless!

With the owl in the bag, we could relax and as the sun came up we settled in for a very pleasant morning of birding.  The targets here were many and there were some very special birds that I very much wanted to see.  While the day was young we focussed on tracking down two colorful fruit-doves, the gaudy Flame-breasted Fruit-Dove and the subtly beautiful Cream-breasted Fruit-Dove, both Philippine endemics and both of course life birds for me.  We also started to rack up a decent species count and more of more of the local birds slowly revealed themselves and I hit a milestone of sorts when a Blue-headed Fantail became my 4,500th species.

With the more common birds joining the list, we broke away from the roadside birding to work on some of the harder to see endemics.  The WHISKERED PITTA is a jewel of a bird and like all pittas can be very difficult to see as they hop around on the forest floor, seemingly always finding a way to stay out of sight.  We heard a bird calling and scrambled into the forest along the course of a small stream working our way up through the rocky ravine to a place closer to the bird and away from the road.  Once there we found a place to sit quietly and watch while Rob played the tape hoping to make the pitta a little curious and entice it to come in closer.  After thirty minutes of waiting silently in the forest, the pitta simply popped up on a rock very close to us and stayed in view, seemingly indifferent to our presence, for the next ten minutes while it searched among the boulders along the stream for the intruder it had heard.  A very special audience with a very special bird. 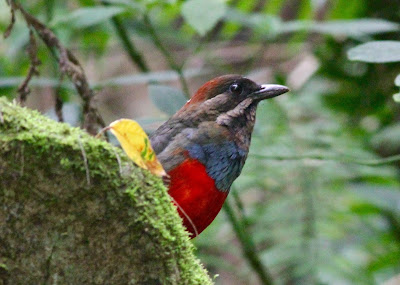 The other 'hard to see' target bird was the local, endemic, BICOL GROUND-WARBLER and this bird did require some serious effort to see.  This species is a mouse of a bird, tiny, dark brown, and very fond of getting down amongst tangled weedy vegetation so dense that you might be feet from one and still never see it.  We heard a number of the ground-warblers calling in the morning but seeing one required a little more staging.  In order to get a glimpse of the bird, some gardening was involved, with Rob cutting a small break in the roadside weeds so that, if we were able to entice the bird close, we might get at least a glimpse of it as it crossed our artificial micro-clearing.  Even with the preparation it still required the bird to cooperate and we had several non-cooperative birds before one made a fatal mistake and allowed itself to be briefly seen.  There are no good photographs of this bird and I was hoping to get a few but, even though I managed to get the bird in the view finder briefly, there were always some pieces of vegetation in the way that ruined the focus.  Still, a very good bird to add to the life list.

As the day wore on and we moved further up the road, the bird activity quietened down a little which gave us a chance to have some lunch and to watch for raptors.    We then birded our way back down the road, adding more species, getting better views of others and generally enjoying a great day of birding. 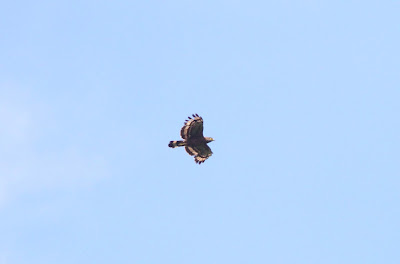 Finally, as the light started to fade, we had one more target which was a bird I had dreamed about and not expected to see.  After a long dusk vigil that stretched well past darkness though I had to accept that the Bukidnon Woodcock was going to have to stay in my dreams and not join my list (my luck with Asian Woodcock is not great and I added this miss to my missing Javan Woodcock the year before).

Up well before dawn again and more time with the nightjars and scops-owls before it got light.  We had the morning to bird the same road again for birds that we hadn't seen the day before.  There weren't that many birds we hadn't seen though so we were able to relax and just enjoy the birds that came to us.

The highlight for me was Philippine Trogon, a bird I had hoped we'd see and were able to track one down and see it well in the understory.  We also tracked down the Philippine form of White-browed Shortwing, a species due to be split in the near future and one where I have been lucky enough now to see several of the island forms giving me several "banked" lifers when the split happens.

All too soon it was time to leave and start making our way back to Manila.  There were two more birding stops to make though, and hopefully a few special birds to add.

Stop number one was the famous Angono Petroglyphs Museum which protected some truly ancient art but also protected some large trees and was a nesting site for the peculiar Philippine Eagle-Owl.  This is a big owl, but somehow looks odd for an eagle-owl, it also apparently eats mostly frogs, so perhaps is more closely related to the fish-owls?  Either way it's an impressive bird and for a huge owl was surprisingly hard to find even though we knew roughly which group of trees the bird was likely to be roosting in.  In the end it was a friendly local security guard who moved us to exactly the right angle to get a view of the bird, I doubt I would have found it otherwise, so very happy for friendly locals.

Then finally, one last stop at La Mesa Eco Park in Quezon City, the stakeout for the endemic Ashy Thrush.  We got to the park late in the day and it was of course crowded with people leaving me wondering how a rare, endemic bird gets along in such crowded quarters.  We didn't need to worry about the people though as soon enough the heavens opened unleashing torrential tropical rain on us and leaving us trying to find shelter under trees but getting soaked through nevertheless.  The rain did chase away the crowds though and with the people gone the birding looked up we soon found an Ashy Thrush hopping around near the trails.

So a great trip, something like 35 life birds for me, and a nice addition to my weekend in Subic Bay earlier this year.  The Philippines is truly daunting with so many islands and so many endemics but at least I've started chipping away at it.  So special thanks for Rob for the expert bird guiding and good company.  I can't wait to get back to the Philippines again.