Growing up in Wales, my image of Brazil was pretty simple.  The Amazon rainforest, literally bursting with Jaguars, Tapirs, monkeys and tropical birds of all sorts, started a block inland from Copacabana Beach and stretched across the whole country.  It's laughable now, but maybe not so different from what a lot of people still explicitly expect Brazil to be.  The forests, the beaches, and the cities still pretty much represent almost everything we see of Brazil in the media in the North and, while we might now know that the forest is being cut down and assume that there's more farmland out there somewhere, we still almost never see anything of the other wild habitats that comprise a lot of the interior of the country.

The movie Rio (and it's sequel) portrayed a very similar version of Brazil.  The rare macaw "Blue" was presumably a Spix's Macaw but most of the action takes place in Rio de Janeiro or in the Amazon rainforest, which in the movie seems to be quite close by.  In reality though, if you want to see a blue macaw, you have to go to quite different habitats.

There were once four species of blue macaws.  The Hyacinth Macaw is perhaps the easiest one to see, and lives in the vast wetlands of the Pantanal where it's regularly seen by eco-tourists and birders (I saw them in 1995).  The Glaucous Macaw is long extinct, and the  Spix's Macaw is extinct in the wild (like the movie though, there are plans to re-introduce them from captive bred stock and to re-create some of the riverine gallery forest they once inhabited, now mostly cut down).  The last one of the group, the Lear's Macaw barely survived it's own recent brush with extinction, being reduced to as few as 60 individuals at one point.  Today it lives in a few sites in the State of Bahia where it clings on in the last few stands of native palm trees scattered across dry country largely deforested for agriculture.  The species is heavily protected and slowly bouncing back from the brink but still very much at risk.

There's something about Lear's Macaws that makes them special.  Partly because it captured the attention of so many interesting people.  The species was first described by Charles Lucien Bonaparte (yes, a relative of *that* Bonaparte) in 1856 and discovered in the wild by Helmut Sick (another famous ornithologist).  Bonaparte named it after the poet, writer and artist Edward Lear who's famous painting of the species was done from life in a zoo rather than from the more usual dead model favored by his contemporaries (insert Norwegian Blue Parrot jokes here).  Lear was a polymath and a 'character' who might have been happier in the 1960s than his own era, now best remembered for his published 'nonsense' poetry for children (The Owl and the Pussycat, etc.) but turned his hand successfully to almost every art form - painter, illustrator, poet, composer, author - in his day.  His bird paintings, many done while working as a 'paid' illustrator for John Gould (John Gould did not paint the 'Gould' prints that you see in every antique print shop) are among the best bird art produced during the Victorian era.  Taken together, the history of this species is just, well .... fascinating.

More recently, there's a trend towards trying to eliminate the 'non-descriptive' names of many bird species and the powers-that-be have officially re-named this species the more neutral 'Indigo Macaw' to avoid any connection to the Victorian era and colonialism I suppose.  I'm personally not a fan of historical revision in ornithology especially when the name here honors such an interesting person (and perhaps one of the only, if not the only, historical LGBT figure with a species named after them).  Losing Lear's Macaw would be a shame, so I'm going to stubbornly carry on using that name.  Call it whatever you want in other languages (ironically the Brazilians rather sensibly call it Arara de Lear in Portuguese) and leave the history alone please.

So after that long introduction, and rare trip to the soap box, you've probably guessed that I've long wanted to see a Lear's Macaw.  So how does one do that?

Today was a long drive.  Pablo Viera Cerqueira and I started the day at Sítio Pau Preto in Ceará State and basically drove South all day across dry, dusty Caatinga habitat that had all the charm and variety of West Texas cow country.  This was not the Brazil of the Amazon, these huge expanses of thorn scrub dotted with rough-and-tumble little cow-towns cover a huge swathe of the interior of the country.  We drove for basically 12 hours straight South through the states of Ceará, Pernambuco and Bahia and saw very little variety save for the odd river (with riverine gallery forest long since cut down) or cow-tank.  Sometimes it takes a while to get to where the birds are. 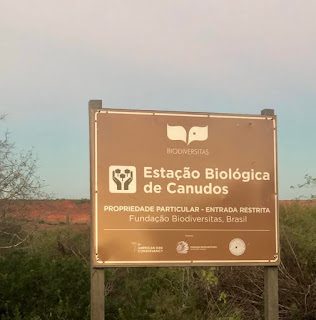 Our goal for the day was the famous macaw reserve at Canudos, established to protect a nesting and roosting site for the Lear's Macaws at a place once famous for poaching the few remaining birds.  Each night the macaws fly in to roost on the red cliffs before heading out again at dawn in search of scattered stands of native palm trees where they feed.  We arrived in the evening, settled in to the basic but well maintained rooms at the visitor center, made a quick side-trip into town for pizza, then crashed exhausted planning to be rested and ready for a pre-dawn date with the macaws.  The stars that night were truly spectacular, something this city dweller is constantly shocked by when I manage to get away from ambient light.  I fell asleep watching them through the gap between the walls and the roof of my room ... another reminder that birding takes you to the most amazing places.

A 4am start and a meeting with two local guides who had coffee and a four-wheel-drive vehicle ready for us.  The drive in to the macaw site was long, slow, bumpy and very dark, and when we arrived there still wasn't enough light to see very much so we sat on a log and waited.  After a while the first signs of life started to stir; a calling Small-billed Tinamou, chipping Rufous-collared Sparrows and a singing Black-throated Saltator out there somewhere in the graying darkness.  Then, as the sun broke the horizon behind distant clouds, the screeching of Blue-crowned Parakeets and Cactus Parakeets on the wing unseen in the gloom, followed by the heavier squawking of macaws.

The Macaws were eventually visible as silhouettes, noisily flying around in small groups or perching on distant cactus.  As it got lighter still, they morphed from black silhouettes into 'indigo' blue birds contrasting beautifully with the red rock and green vegetation.  They seemed to keep their distance though and I struggled to get any photos, which surprised and frustrated me as I've seen so many beautiful photos from this site.  Better, or more patient, photographers than I have captured some truly stunning images here and made this site a mecca for birders.  Still, photos aside, we got good looks and we had the magical experience of seeing this very special bird flying around in this amazing world of rugged red cliffs .... one of the truly iconic images of birding in Brazil.  Definitely an experience I'll long remember.

All too soon our allotted time was up and we made our way back to the reserve HQ and a wonderful local breakfast prepared by the reserve staff.  These folks really do have the macaw experience worked out, all very slick from start to finish.  Then, fed and happy, we started the long drive back North to Ceará hoping to arrive in Juazeiro do Norte in time for dinner, some rest and a 3am flight to São Paulo.  Somehow it seemed even longer driving back and we both agreed that this was an awful lot of driving for a single life bird.  Was it worth it?  Of course it was .... 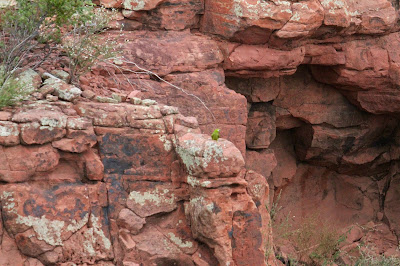 P.S. on the subject of blue macaws, the Rainforest Trust is raising money to create safe habitat for the release of Spix's Macaw back into the wild.  The species has been extinct for some time but luckily, various zoos and other collectors were persuaded to loan birds to breed a captive population.  Releasing the birds requires safe habitat for them to live in so this part of the project is critical if we want a third species of blue macaw back in the wild.  Just something to consider.