The Quest for the Blue-eyed Ground Dove.

A Journey to See One of the Rarest Birds on Earth

It's three a.m. and the baggage-drop line at the airport in Juezeiro do Norte (in Ceará State in Northeast Brazil) is simply not moving.  We'd left the hotel at 2am in order to be on time for our 3:20am plane to São Paulo and, after waiting on line now for 40 minutes, it's pretty obvious that we aren't going to make the flight.  I'm tired and grumpy and haven't yet had coffee.  My companion, biologist Pablo Vieira Cerqueira, seems calm but I can tell that even he's getting slightly stressed as the line stubbornly refuses to move and the four uniformed GOL employees dawdle along with the bag-check process at their own good speed.  This is the first of three flights planned for the day, so missing this flight would almost certainly waste twenty-four hours.  This is not shaping up to be a smooth travel day.  Ah, the joys of World-Birding ....

We made it in the end.  The boarding process that morning was so delayed that the airline decided to wait for the passengers rather than leave on time and empty.  A one-hour delay into São Paulo and we were still able to make connecting flights to Belo Horizonte and then onto Montes Claros in Northern Minais Gerais.  Then a near four hour drive to the town of Botumirim where the mostly dirt streets throbbed with the sounds of a local religious festival.  By the time we made the little three-room local hotel, the only one in town, we were tired, hungry and exhausted after 18 hours traveling.  The restaurants in the town were closed for the festival (or more likely just so full as to not be gringo-friendly by that time) so the owner of the hotel kindly agreed to cook for us.  Never has a home cooked meal and a can of cold beer been so gratefully received.

Today was ground dove day.  We had come here to search for the rare BLUE-EYED GROUND DOVE a bird long thought extinct but recently rediscovered at a single site near town.  There are estimated to be only 22 living individuals of this species in the world and extensive searching in recent years has failed to turn up any more since the original re-discovery.  This is a very rare bird, and one that justified slogging half way across Brazil to try to see it ... OK, so I'd been a bit grumpy the day before, but now I was excited.

Before dawn we met our local guide, the charming and softly-spoke Marcelo Lisita Junqueira, who works as the warden at the reserve for the doves.  Birders are permitted to visit here with prior arrangement (and permits) but are chaperoned to avoid habitat disturbance and to ensure that local (and very sensible) rules like the ban on playing recordings to attract the birds, are observed.  The trade off though is that Marcelo knows exactly where to find the birds and as we headed to the reserve I was idly wondering what we'd do with the rest of the day once we'd seen them.  It ended up taking a little more effort than I'd thought. 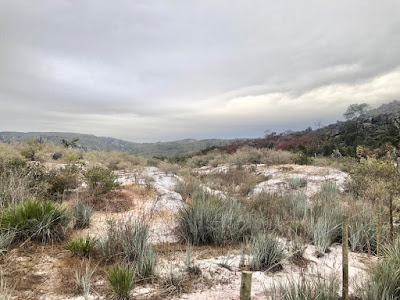 Reserve Natural Rolinha-do-planalto is quite beautiful, the kind of place that makes you want to be a botanist so that you could understand what the amazing variety of unfamiliar plants actually were.  This little bowl of white-sand habitat with patches of dense scrub and rock outcroppings in surrounded by picturesque cliffs and bisected by a sand road.  It just looks like the kind of place that is stuffed with interesting life and indeed the first thing we saw when we got out of the car were Ocelot tracks in the sand.  Walking along the road, Marcelo soon oriented us.  The doves apparently liked the dense vegetation near the rock outcroppings and to see them we basically had to wait for one to pop up and let itself be seen.  So we took positions at promising looking spots, where Marcelo knew the doves were seen recently, and waited ... and waited ... and waited .... 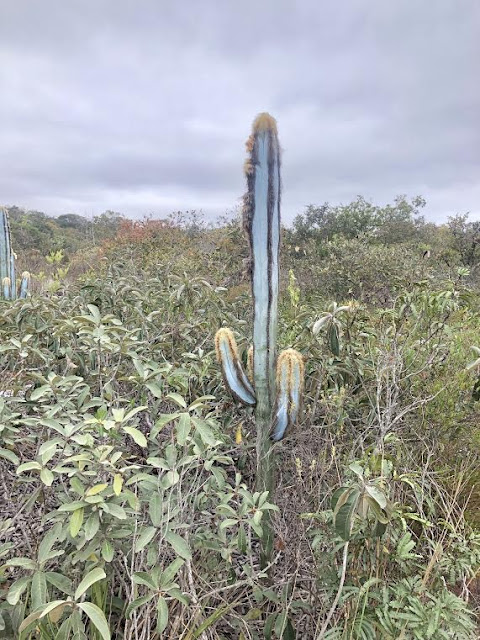 Five hours later, we still hadn't seen a dove.  We'd seen plenty of other birds, in fact I really felt like I'd gotten to know the locals pretty well and even managed to take quite a few photos of the resident birds along the road.

Five species of hummingbird seemed to be on territory along the road and often posed for photos, the best being the showy and local Horned Sungem, although we only saw a female.  There were also lots of flycatchers, tanagers, finches, seedeaters, thrushes and the like.  In total we saw over 40 species along the road, but none of them were doves.

At one point, Marcelo did briefly glimpse a dove but we were very spread out and, by the time I saw the hand signals and walked several hundred yards down the road, the bird had dropped back into the dense cover and vanished.  The doves weren't even singing or calling so there was no 'heard only' option and with mid-day approaching I was beginning to assume that we would be coming back in the afternoon for another search and feeling grateful that we also had another couple of hours the following morning for a third try if necessary.

Then, around noon, another hand signal from Marcelo and Pablo and I rushed over to where he was pointing (well Pablo rushed, I can't manage more than an amble these days).  By the time I arrived, the others had bins up and were watching a BLUE-EYED GROUND DOVE sitting up on a small bush not far from the road.  Relief!  I raised my camera, found the bird and fired, but instead of the blast of shots I expected to hear, it fired only twice.  Tried again ... nothing.  Then looking down at the camera screen, the problem became obvious "MEMORY CARD FULL" .... five hours of hummingbird photos and now I was not going to get a photo of the main target!  I scrambled to delete some photos to free space on the card but, by the time I lifted the camera again, the dove was gone.  What were the chances of one of the two shots that I did get being in focus?  Slim I thought, but when I checked, I was lucky.  I had one (more-or-less) in focus shot of a dove, albeit with it's bill hidden behind a bush.  Good enough.

Now everyone could relax and you could probably hear the guides breathing a sigh of relief at great distance.  I usually have mixed feelings in these moments; thrilled to see the bird and accomplish the mission but also sad that the species is so rare and worried for it's future.  The future of the Blue-eyed Ground Dove does not yet seem secure despite the protection it now receives.  It isn't hunted by humans but nest predation seems to be an issue and camera traps and nest monitoring have revealed several species of wild cat and the local feral dogs all potentially preying on doves and their nests.  Even with the best efforts of all concerned, the population is so small and at risk from some tragedy, a forest fire perhaps, impacting it's last known site.  The prospects for this species are at best tenuous but there's still hope, so fingers crossed for this one and I'm happy to see great organizations like Birdlife International, The Rainforest Trust and Save Brasil doing such important hands-on work (all three organization are on my personal giving list by the way and all do amazing work, please consider joining me in donating much needed funds to support them).

With the dove in the bag, we were free to bird at leisure that afternoon and the next morning, adding a few more species at the reserve and more good things locally. 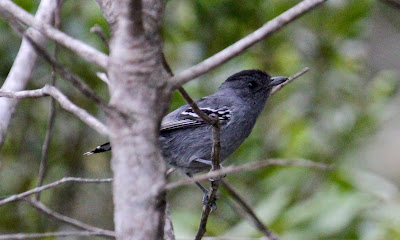 We were also treated to another amazing home-cooked meal that night (I didn't even ask about the local restaurants).  I was thinking just how perfect everything was that night after dinner and then, walking out of the dining room in the dark, wearing flip-flops, I slammed my toe into a low concrete step and had to deal with a bloody, bruised, swollen mess of a foot for the rest of the trip .... oh well, at least it happened after I got the dove.

Finally, after a morning hobbling and birding at Mata do Lobo which added Yellow-legged Tinamou, White-bellied Nothura and Narrow-billed Antwren among others (you know the birding gods are smiling when you get two tinamous) we had to wend our way back to the airport for a flight back to São Paulo.  A very successful and highly do-able single-bird mission (with huge thanks to Marcelo and Pablo).  I felt very honored to see this bird.

And so on to other adventures (oh, and the toe healed after about two weeks, although it was gruesome-looking and painful the whole time).


Posted by Welsh Birder Abroad at 9:58 AM