A Great Day in Montauk - Northern Lapwings and more.

So once again a pre-dawn start, this time to get to the last known location of the Montauk Northern Lapwings before first light.  I was pretty highly motivated to see these birds, not so much because I needed them for State or County Lists (I'd seen the one at Mecox in 1995) but because I'd missed a potential year bird right here on my own local patch.  I had probably checked the South Field at Deep Hollow Ranch at least once a day since the Lapwings had appeared in Massachusetts the week before.  I was quite sure that we'd get one and that I'd find it if I just checked often enough and then, when the birds finally did show up, they picked the day that I decided to go to Queens for the Virginia's Warbler(!).

So, with just a bit of nervous tension, I skipped coffee and rushed out to Montauk at first light.   I pulled up to the Montauk Airport (airstrip?) at dawn but, as the light rose, the Lapwings were nowhere to be seen.  And so I zipped from one potential location to another in the early morning, trying to find them and hoping that they hadn't left the area for good.  Soon more and more birders joined the hunt and, as the coverage improved, I decided to position myself at Teddy Roosevelt CP where I figured I'd have the best chance of a fly-over if they were still in the area.  Interestingly, the gate to the back field was closed and so I didn't hike back there for some reason, sticking to the 'sky-watch' plan instead.

After a couple of hours, my optimism was flagging a bit so I took a break to go and look for the previously reported Myiarchus flycatcher at Rita's.  No flycatcher, but while there I bumped into Michael McBrien who was watching a bird he felt sure was a Brewer's Blackbird.  I managed a few shots of the bird but it quickly flew off leaving us wondering.  It also was my cue to get back to the serious business of searching for Lapwings.

Then at 8:58am I got the 'magic text' when Peter Polshek messaged me to say that Jim Ash had refound the birds at the back field at Teddy Roosevelt CP (should have checked it earlier).  Rushing over, I joined a slew of New York birders, hiked up the hill and down the side trail, and sure enough, NORTHERN LAPWING (NYS 2012 #350).  The birds were feeding in the field but were also quite flighty and flushed twice meaning I probably would have seen them if I'd stuck to my plan (gotta work on my patience). 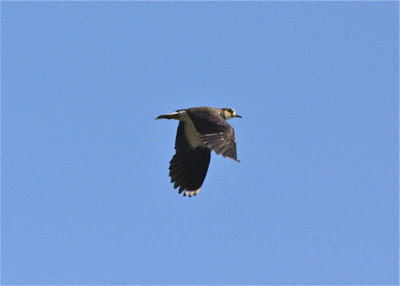 So, Lapwings accomplished, we spread out to find more birds - a rare influx of serious birders to my local patch so I was excited to see if they could turn up anything.  Best bird found today was the previously mentioned BREWER'S BLACKBIRD (NYS 2012 #351) found by Michael McBrien and subsequently seen by many when it showed up again later at Rita's.  This is a tough ID and most of the birds reported as Brewer's on Long Island end up being Rusty Blackbirds in unfamiliar plumages.  So a great call by Michael, yet another teenage hotshot birder making the rest of us feel old.

Among the other goodies found were two Cackling Geese, five Greater White-fronted Geese, and a presumed 'Dusky' Goose (which may be the rarest of the three on the East Coast).  Winter Finches were also around in numbers with sightings of Red and White-winged Crossbills, Evening Grosbeaks and Pine Siskins all around Montauk (I saw all four).  Peter Polshek and I also had a Northern Rough-winged Swallow which, being super late, we watched for a long time hoping it would magically turn into something rarer.  And although we never did re-find the Myiarchus flycatcher, I can't complain because it was a truly great day of birding today.

And I'm now just one species away from the current NYS record ....
Posted by Welsh Birder Abroad at 5:18 PM