So I gave in, and against my better judgement rushed up to Ithaca on Tuesday (the day after every birder at Cornell University saw the bird), hoping to make LeConte's Sparrow the bird that broke the record.  I have terrible karma with this species, having chased and missed four in the NorthEast in previous years, but perhaps (I though) on this special occasion, one would actually cooperate.  Unfortunately, after having been flushed by the aforementioned student body innumerable times the sparrow departed for a new location, probably in search of trauma counseling.  And so, while it was a pleasant 9-hour round-trip drive (!), I went into Thanksgiving still tied with the record.

So back to the usual routine of seawatching, searching scrub for Ash-throated Flycatchers, photographing crossbills, and (for a little variety) thinking of new ways to cook turkey.  On Friday I did actually get some decent Seabirds with lots of Razorbills and a Red-necked Grebe out at Montauk.  The latter guaranteed a visit from Derek Rogers the next day as it seems to be one of his bogey birds in Suffolk County (although he's seen plenty elsewhere).  So when he said he'd come out on Saturday I made a note to go back to Montauk to try to help him find it.

Friday had been beautiful, but Saturday dawned cold and with a blasting North wind.  Still, grebes weren't going to find themselves so I made my way over to Montauk and, after seeing more crossbills in various spots, met up with Derek at Montauk Inlet.  The wind was a challenge but, sheltered behind the cars, we managed to get some seawatching in and, even though the grebe was a no-show we did see Razorbills, and the usual scoters, eiders, gannets, etc.

Nearly an hour later a small black-and-white bird zipped through my scope, close to shore, but moving fast.  Alcid ... small ... tiny .... fat body .... big head .... long wings ..... whirring flight .... underwings .... underwings ..... dark!  DOVEKIE (NYS 2012 #353!).  Now to get Derek on it - a witness was very important at that moment but my directions unfortunately were worse than useless.  Turns out that "in front of the building in Connecticut" isn't all that helpful in finding a fast moving, starling-sized, bird in 50-square miles of water.  Luckily Derek was smart enough to look at my scope angle and move ahead of the bird to the red buoy and the jetty so that, when the bird got close, he picked it up easily. Whoops and high fives when he got on the bird and got good looks, confirming the ID.

So that was that. The record finally broken, although given that it only stood for one year I think I'll try and add a few more species to see if I can make mine last a little longer than Richards.  As an aside, I should also thank Richard Fried for being such a good sport this year.  He set an amazing record last year so to have someone chase after it and break it the very next year was probably a little galling at times, but he's been a good egg about the whole thing.

And so onwards, and a fly-over Lapland Longspur brought me back to reality a few minutes later (Suffolk County Year-Bird!).  So off to Camp Hero in Montauk where Angus Wilson was having a lot of good birds.

Joining Angus, he pointed out some Black-legged Kittiwakes and we spent a pleasant half hour watching large numbers of Red-throated Loons and Razorbills among a range of common seabirds.  Splitting up, we headed off to check different areas but I hadn't gone 50 yards before I got a call from Angus who had just had three Cave Swallows heading my way.  Heads up, but no sign of them until I got back to the Camp Hero parking lot where I saw three, then six Cave Swallows hawking over the lot. 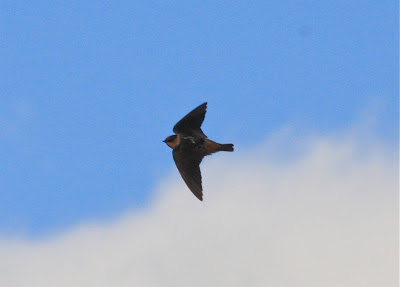 While Angus and I were in the parking lot, Derek called to report two more Lapland Longspurs and then an odd loon that he couldn't quite pin down.  I had to leave soon so I didn't go over to the Point to look, but now that I've seen the photos I probably should have.  Pacific Loon is way overdue at Montauk and his bird looked like a good candidate.  Another day perhaps, and now I have another bird to obsess about at Montauk.