Pine Grosbeaks and Bohemian Waxwings in the Champlain Valley

So I've been watching the reports of Pine Grosbeaks upstate for the past two weeks and holding back the impulse to run up for them.  The nearest grosbeaks are still at least a 5 hour drive from the City so I was hoping that perhaps a Hoary Redpoll would show up so that I could combine the trips.  Finally the temptation just became too much though, with all my Adirondacks friends reporting Grosbeaks, some even from their yards.  So I finally gave up and planned a quick one day trip to try and get the bird.

I left Manhattan at 4am and got off I87 at Westport in Essex County nearly 5 hours later.  There had been reports of Grosbeaks in the town of Westport but, after 10 minutes of driving around peering at bushes and apple trees in front yards (I really hate this type of birding) I had no luck.  Heading down to the lake I saw a sign for a boat launch which seemed familiar from bird-alerts, so I pulled in and flushed a flock of 60 BOHEMIAN WAXINGS that were bathing in a stream.  A blizzard of bohos came blasting past the car as they flew up into a nearby tree.  Not a bad way to start the day.

So, giving up on Westport I headed to Elizabethtown where there had been reports of many more grosbeaks.  Stopping briefly for a Northern Shrike, I pulled into town number two and started looking for grosbeaks again.  After two or three streets, I passed the Community Center (?) and caught sight of birds in a roadside tree out of the corner of my eye.  A quick (legal) U-turn and I found a convenient parking lot to pull into.   I got out, and there they were ... 17 PINE GROSBEAKS (NYS 2012 #352 - Ties the All-Time Record). 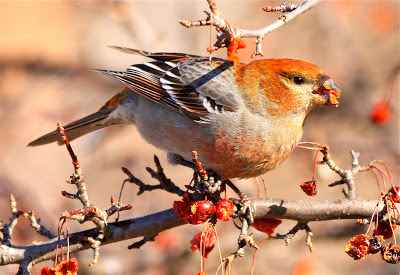 After taking 318 photos (went a little mad apparently) I finally dragged myself away and went up to Lake Placid where I had lunch, got a local (negative) Hoary Redpoll update, and failed to find Pine Grosbeaks at two other recent sighting locations.  So figuring I may as well head home I turned South but decided to stop in one more time at the Elizabethtown site.  The Grosbeaks were still there, in fact there were a few more (so probably more in the neighborhood) and there was an adult male in the mix. A pretty neat sight, and a great bird for #352.  One more species to go .... 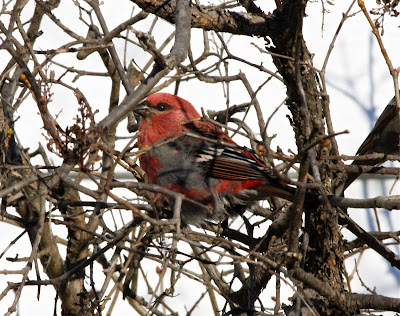 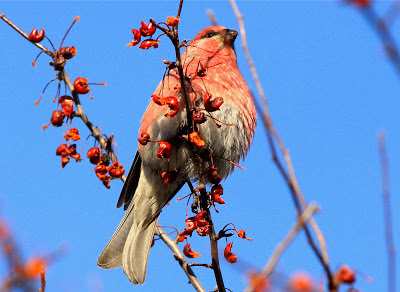