Some birding at Otún Quimbaya and Montezuma / PNN Tatamá

On Friday, July 14th I flew to Bogota and then on to Pereira in the Colombia Andes where I was met by Daniel Uribe for a week of private guided birding around some of Colombia's best birding spots.  Daniel is a very well known guide and has an eBird map for Colombia that made me very jealous, having seen 1,363 species in the country.  Before this trip, with one brief stop in Bogota to my name, long before the days of eBird, I had zero species for Colombia (!), but I was pretty sure that was going to change during the week.

Our first stop for the week was Otún Quimbaya, where we pulled up to the lodge not long before dusk.  Still, we did have a few moments for birding and the endemic CAUCA GUANS (a species once thought to be extinct before being rediscovered here a few years ago) performed nicely for us, getting my Colombia list and adventure underway in style.

The next two days followed similar patterns, birding along the main road which, while pretty rough in places, allowed us to follow the river valley up into the park through a mix of old plantations and native forest.  The undisputed target bird here is HOODED ANTPITTA (a bird reliably found only here and at one site in Venezuela) which we managed to see in the second day after a long search.  While working the road though, we also saw dozens of other species that ranged from common to endemic and provided me with a good introduction to the Colombia Andes, and a bunch of life birds. 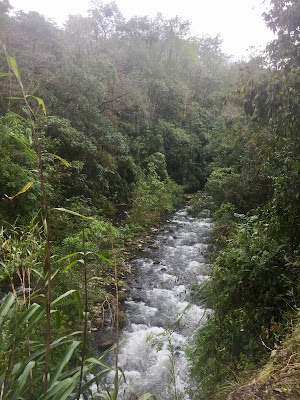 Among other highlights were the endemic Grayish Piculet and Whiskered Wrens around the lodge.  The near-endemic Bar-crested Antshrike called constantly from the slopes around us, while we also heard multiple calling Moustached Antpittas, a bird I'd encountered as a rarity in Ecuador some 20 years ago.  Chestnut Wood-Quails were another treat, calling like crazy then rushing across the road in front of us, and of course there were great mixed flocks with some very nice treats including Rusty-winged Barbtail and Streak-capped Treehunter mixed in with more common species.

The first night there we went out to try for Colombian Screech-Owl but came up short so, we ended up trying again.  That second evening started off much better with a pair of calling  Rufous-bellied Nighthawks hawking over us at dusk.  The Screech-Owl also popped up into a nearby giving us some decent, if brief, views before vanishing into the night.


The highlight of the visit also occurred at night, although more specifically as we drove out along the road before dawn.  We had seen a couple of Crab-eating Foxes driving along the road the night before and saw another one that day.  Then another set of 'eye-shine' appeared down the road before us, but flipping the headlights to bright revealed not another fox, but a cat!  The cat in question, a small spotted cat native to the cloud forests called an ONCILLA, dropped down low on it's belly and slunk off into the forest looking a bit sheepish about being spotted.  I never see cats, I have terrible cat karma and had seen only Jaguarundis in South America before (no Jaguar, no Puma, no Ocelot, no Margay, etc.) so I was thrilled and buzzed for hours afterwards.  A very, very cool moment. 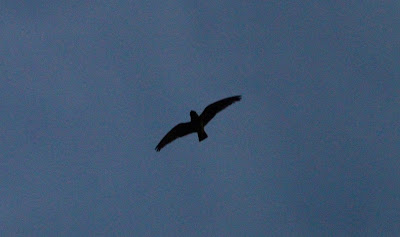 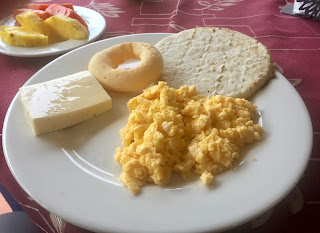 The lodge itself at Otún Quimbaya was very serviceable even though I couldn't work out how to get a hot shower - cold showers are character-building I suppose.  I also got an introduction to Colombian food, which tends to be a protein and three 'carbs' (plantain, rice and potatoes for dinner) and the inevitable 'aripa' (a corn pancake) for breakfast.  Aripas I learned are much better with butter and salt on them, I think I ate one each day for breakfast 9 days in a row.  Good hearty food if you've been out in the field all day, or are about to go out all day.


All to soon though it was time to move on, and we spent the next 5 days in Caldas Province before returning to Riseralda. 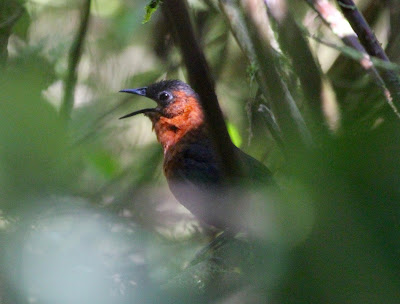 After a couple of sites in Caldas Province (another blog post) we came back to Risaralda for our final stop, the legendary Montezuma Lodge in Tatamá National Park.  I'd heard a lot about this place and over the next 2+ days I got to see at least some of it in the company of Daniel and the owner/manager of the Montezuma lodge, the wonderful and impressive Michelle.

With two full days here we opted to drive up to the higher altitudes (a rough road but passable with a four-wheel-drive vehicle) on the first day, then bird the mid and low altitudes the second.  Two days couldn't possibly do justice to this place but we focussed on the specialities and determined to bird pretty hard while we had the chance. 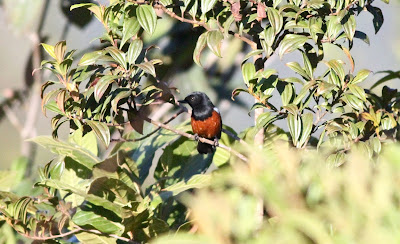 Our targets at high altitude were the endemic Chestnut-bellied Flowerpiercer and Munchique Wood-Wren which we saw relatively easily with a little effort.  The star bird at the top though turned out to be something else entirely.  Michelle got us on to a Tawny-breasted Tinamou, that most secretive and rarely seen of birds which, while trying to sneak quietly away from us unseen, had gotten itself trapped on a steep bank ... it couldn't go up, and wouldn't come down as that meant walking towards us.  So for five minutes we had a captive tinamou in the open for a photo op .... this just doesn't happen often, a rare treat.

The joy of Tatamá though is the range and quality of it's mixed flocks and during our birding day there we saw a huge variety of very cool birds.  Tanagers, Barbets, Flycatchers, Antshrikes, Warblers, Wrens, Jays, Woodcreepers, Fruiteaters, etc. just super high quality birding.  Among the birds that stood out, the endemic Gold-ringed Tanager, Purplish-mantled Tanager, Black-chinned Mountain-Tanager, Yellow-breasted Antpitta, Bicolored Antvireo, Fulvous-dotted Treerunner, and many many more. 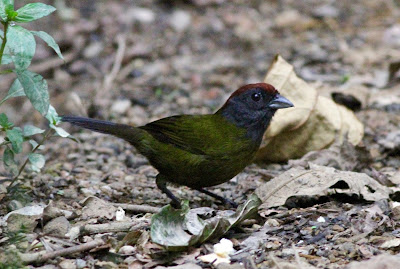 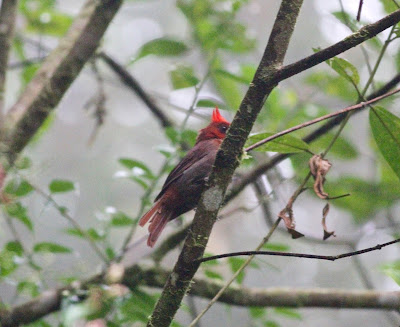 There were also good birds away from the flocks, a lek of Club-winged Manikins was a treat, as was a brooding Cloud Forest Pygmy-Owl.  A small group of Beautiful Jays, found just up hill from us by a bunch of Australian birders resulted in a quick scramble, but also a broad agreement that yes, this indeed a beautiful jay. 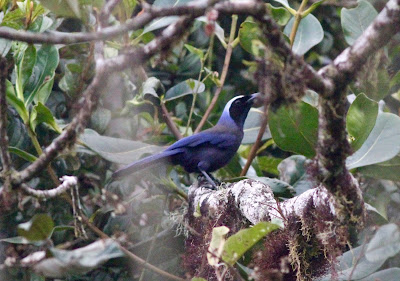 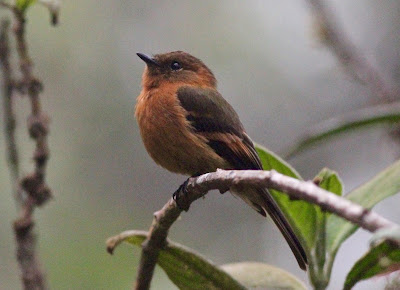 Hummingbirds were also a abundant and spectacular, with feeders at the lodge, and at several places along the trail bringing in such superstars are Empress Brilliant, Velvet-Purple Coronet, Purple-bibbed Whitetip, along with more common but spectacular Violet-tailed Sylphs and Andean Emeralds. 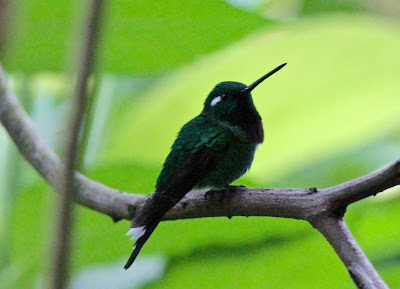 All in all, just a spectacular two days of birding with 233 species seen in Risaralda province just in these few days at two sites.  Definitely want to go back ... who knows what we'll see next time .... 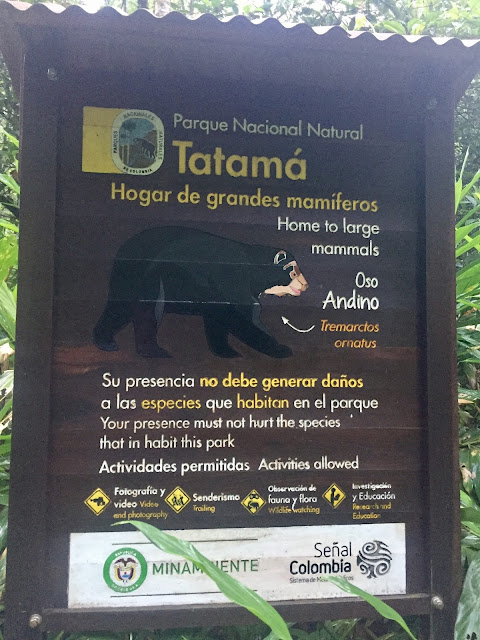 Posted by Welsh Birder Abroad at 11:54 AM