After leaving Risalda Province for the first time we drove up to the city of Manizales, perched precariously along a ridge with steep drops, and roads, on either side.  After a night in a hotel and the national coffee growers trade association headquarters (hot water!) we headed up for a full day in PNN Los Nevados.  The weather initially looked worrying, and while the morning was freezing cold, and dogged by drifting fog and low clouds, we did manage to get some serious birding in nevertheless.

The drive up looked promising and indeed we made several very productive stops for Paramo Seedeater, Paramo Tapaculo and Golden-breasted Puffleg. 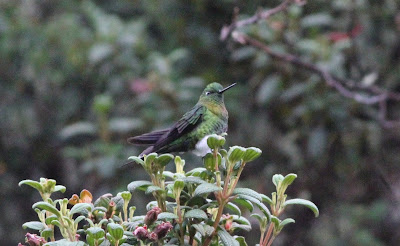 We had a specific target bird in mind through so pushed up past the tree-line and soon were in the Paramo habitat proper (when we could see it between the drifting clouds that blotted out all visibility on regular intervals).  The birds here changed too, with Stout-billed Cinclodes, Many-striped Canastero and Tawny Antpittas joining the mix.

By the time we reached the park HQ, a small cluster of buildings high in the treeless Paramo habitat, it was quite cold, and very cloudy.  Visibility was pretty much limited to 20-30 feet around us, and sensing that this would make it hard to see our target, we went indoors and enjoyed a restorative local hot sugar cane drink ... not sure what it was called, but it was really good on a cold day.  Fortified by all the hot sugar we set up on the back deck of the HQ, and about twenty minutes later, just as we were starting to shiver again, our target, the BUFFY HELMETCREST zipped into view.  This is one of a group of closely related and recently split hummingbirds, all of which have tiny ranges in high mountain areas.  Definitely the star bird of the day.

The excitement wasn't over though as Daniel wanted to make another stop on the way down, to follow up on a recent report of a bird that would be very rare for Caldas Province.  As we birded along a road, Daniel suddenly locked on to a bird, and shouted at me to "take photos of that bird while I go and get my camera"!  The bird in question was a BLACK-THROATED FLOWERPIERCER, the first record for Caldas Province and a significant range expansion for the species.  I did get some bad photos before Daniel, who is a professional photographer brough his (very superior) camera and lenses from the car and got much better ones.  Quite a moment of excitement though.

The rest of the day was more mellow; a nice lunch of trout at a hotel with natural hot springs and very good hummingbird feeders, then a slow birdy drive down a forested valley and back to Manizales.  Definitely a nice day trip to the mountains though. 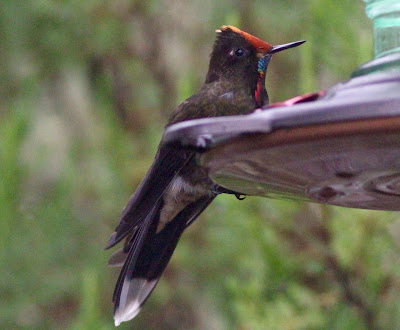 Another famous reserve that I'd really been looking forward to visiting and with two full days, and a bunch of target (life) birds to chase, so good birding was hopefully ahead of us as we arrived on Tuesday morning.

Rio Blanco is famous for Antpittas, not just any old antpittas though, but rather several rare species of antpitta that have been painstakingly habituated to come to 'feeding stations' to eat worms placed out by the lodge staff.  Within minutes of arriving, we were joined by a local guide/volunteer and accompanied her on the daily routine of feeding the antpittas.  First up, the near endemic Bicolored Antpitta  which eventually appeared in a shady clearing under a tree after a good five minutes of whistling and quietly waiting.  These birds didn't just pop up for their lunch, they remained mostly cautious and quite wild.  The Slate-crowned Antpitta and the endemic Brown-banded Antpitta were similarly cautious, but the more common Chestnut-crowned Antpittas were positively tame and hopped around our feet while waiting for their worms, one even allowing me to feed it by hand (!).  I gather this method of habituating birds has its critics .... I'm not really going to comment on it, but I did have a lot of fun seeing very close antpittas .... 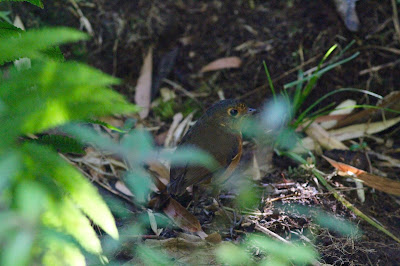 With the antpitta show done, we turned our attention to the mixed flocks along the road and enjoyed a good range of species, interspersed with several target birds like the endemic Golden-plumed Parakeet, White-capped Tanager, Black-billed Mountain-Toucan, Buff-breasted Mountain-Tanager, Ocellated Tapaculo, and a quick visit from the spectacular, local and very rare MASKED SALTATOR. 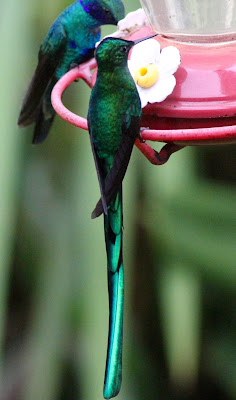 Hummingbirds were also very much a thing at Rio Blanco with at least a dozen species at the two sets of feeders.  A vigil at the lower gate was rewarded with good views of a Wedge-billed Hummingbird and at other times just sitting by the lodge feeders produced a busy mix of hundreds of individual birds.  Long-tailed Sylphs, Bronzy and Collared Incas, Lesser and Sparkling Violetears, Tourmaline Sunangels, Buff-tailed Coronets, Fawn-breasted Brilliants, White-bellied Woodstars, Speckled Hummingbirds, all condensed into a small area and fury of activity.  As I write this I'm watching my own feeder in New York and - I have one species of hummingbird, Ruby-throated, and perhaps four individual birds visiting - and feeling very nostalgic of the tropics.

We also did a little night-birding one day, but had nothing terribly rare to report - just White-throated Screech-Owls and Rufous-banded Owls.  Later we made a quick one-night stop at Hotel Tinamou, adding a few additional species to make the total for Caldas Province a very respectable 262 species for a few days of birding. 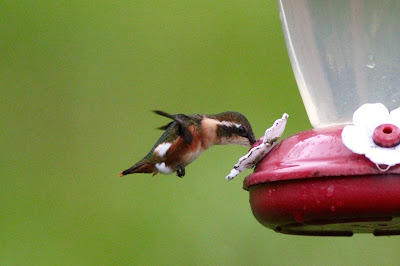