The Hunt for the Royal Cinclodes

This was a bit of a spontaneous trip.  It actually started with a restaurant reservation of all things.  Like many birders I keep lists, and one of my most obsessive is the World's Fifty Best Restaurants list (I'm a bit of a foodie too).  So when I scored a reservation at Central Restaurant in Lima (currently #5 in the World / #1 in Latin America) I started to put together a Peru trip.  Dinner in Lima morphed into a foodie weekend in Lima, adding meals at Maido (#8 in the World) and Astrid y Gaston (#33 in the World).  Then, seeing as I was coming all this way, why not add in some birding too?  So I reached out to Barry Walker of Manu Expeditions and fast forward a few weeks I was waiting in the lobby of the Palacio del Inka Hotel in Cuzco for Gustavo Bautista (a very talented hot-shot young Peruvian birder) who was going to be my guide for a few days chasing endemic birds in the Andes around Cuzco.  It's not tough to be me, what can I say ... 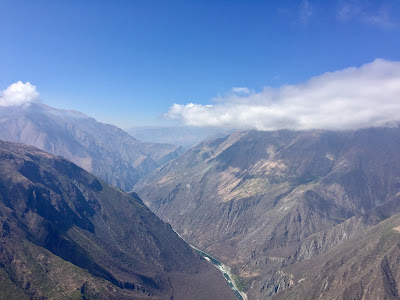 The birding part of the trip actually started with a fairly "dudie" (easy, not terribly serious) kind of trip to Mirador del Condor which provided a chance to get used to the altitude (3,000 - 4,000 meters) and to get some of the local birds.   While the birding was low key, I did add some local endemic life birds; Rusty-fronted Canastero, Creamy-crested Spinetail, and Apurimac Brushfinch were all endemics, while some surprise Andean Parakeets were also a lifer for me.  Oh, and yes, we saw some Andean Condors, but then again, we also saw them on each of the next three days.

Accommodation that night was a strange little yoga hotel/lodge tucked in the middle of nowhere, and run by an interesting German lady who served us surprisingly good vegetarian food, all of which was grown on the property.  I am NOT a vegetarian, but I had to admit that the food was good, and the Peruvian Pygmy-Owl and Koepke's Screech-Owls we had on the property before and after dinner made it a memorable experience.

A bit of a travel day but with some very high quality birding on the road up to Soraypampa .... a winding, often scary, unpaved switchback road that went through great habitat but frayed my nerves somewhat.  To be fair, we only had to get out and push the van once (with the help some strapping local octogenarian farmers who frankly were a lot stronger than me) but I definitely felt like I needed some dramamine and really tried hard not to look out of the windows as we wound our way up and down the road.  Having said that, the birding was great and birds on the way up included Andean Tinamou in the road, Chestnut-breasted Mountain-Finch, Undulated Antpitta and Red-crested Cotinga.  It also provided a major milestone for me when APURIMAC SPINETAIL became my 4,000th species in eBird!  My life-list is a mess, and I've been trying to reconstruct it in eBird based on old paper trip lists.  I know I don't have everything in (missing multiple trips to India and Africa) but this year I decided just to give up and start again with what I had in the eBird database.  So my fist major milestone of my new listing era .... feels worryingly good ..... 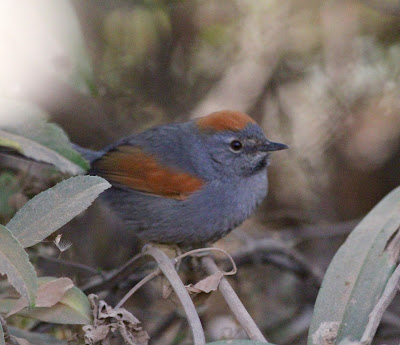 At the top of the road we also made a stop for Vilcabamba Tapaculo - I have a huge soft spot for Scytalopus Tapaculos, especially ones that allow themselves to be seen and photographed.  For a travel day, we had good birds, and ended up in a nice tourist hotel in Ollantaytambo which offered good Alpaca Steaks, decent Peruvian red wine, and a surprise meeting with Jesse Fagan and the Field Guides Machu Pichu & Abra Malaga Tour ... definitely not slumming it on this trip.

So this was the real focus of the trip.  Abra Malaga, a high pass with access to some very high altitude Paramo and Polylepis habitat (>4,000m) and some endemic-rich forests at lower elevations.  During our two days here we racked up a whole bunch of life birds for me, mostly Peruvian endemics, including Blue-mantled Thornbill, Stripe-headed Antpitta, White-browed Tit-Spinetail, Line-fronted, Junin and Streak-Throated Canasteros, Ash-breasted and Unstreaked Tit-Tyrants, Marcapata Spinetail, Inca Wren, Puna Thistletail, and Cuzco Brushfinch. 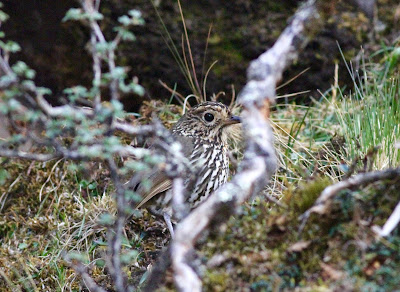 The one bird I most wanted to see here though was the ultra-rare (less than 250 individuals left in the world) ROYAL CINCLODES, and even though I knew we'd have to do some serious hiking up and down steep trails at altitude to have a chance of getting it, we made it the main focus of our stay.  First we hiked (and literally crawled at one point) up into some promising looking polylepis forest at the pass .... nada.  Next we hiked down (knowing we had to hike back up) to some rock-jumbles where a friend of Gustavo has seen the bird that year before ... nada.  So then we hiked up into the 'Royal Cinclodes' reserve which involved climbing up a ridge, working down a very steep hill in polylepis forest, hiking up a steep valley, then walking down and out at the bottom .... 6 hours of leg exercise that would make the most sadistic gym-trainer proud, and ..... nada. 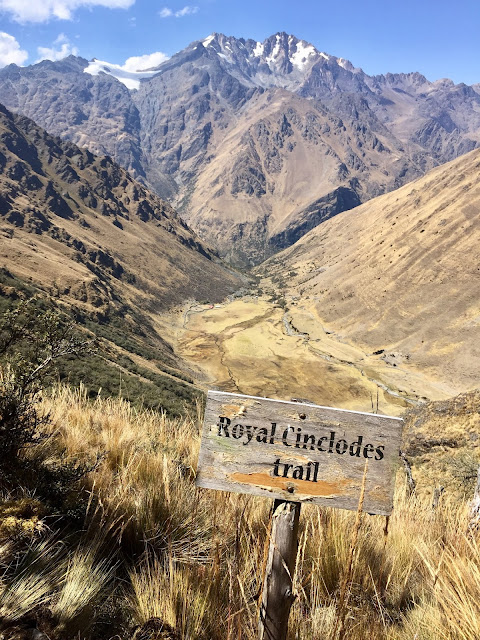 Seemed like the Royal Cinclodes were simply not on their traditional territories yet, but undeterred, we did it all again the next day and ..... nada.  Some birds are not meant to happen I guess, but in this case, at least not for lack of trying.  This species is very rare and, even though this location is probably the best and most reliable/accessible site for the species, there is perhaps only a single pair (maybe two) present seasonally.  We were probably there just a week or two too early for the birds to be back on territory.  Frustrating, but that's life chasing rare birds. Gustavo worked his ass off trying to get me the bird, and put up with my wheezing and grumbling up and down trails while he bounded ahead gazelle-like to scout extra Polylepis patches for cinclodes.  In the end though, we had to save this bird for another trip.

A morning of 'filler' adding a lot of birds to my Peru list and my (World) Year list but only one life bird - Bearded Mountaineer.  Still, my year list is actually pretty respectable this year .... 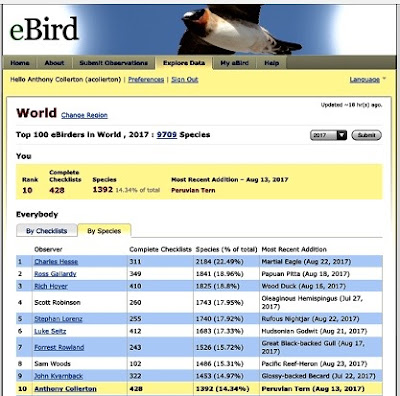 After that the tip changed pace and tone and let's just say I added a lot of things to my life food list.  Wonderful dining experiences and some nice cultural things.  Overall, a great trip, and the birding had been good too, with 28 life bids, most very local endemics.  Still plenty of things to see in Peru though, and who knows .... maybe I'll be back for another crack at that Cinclodes .....