Is it Shorebird Season Already?

Locked up at home with a sick dog who just got back from knee surgery.  No way I could get out of the house on Friday and so, of course, Michael McBrien finds a breeding plumage Curlew Sandpiper at Cupsogue (a bird that would be a State Bird for me).  The bird promptly vanishes with the high tide though, so it doesn't look look like I bird that I'm going to get.  Can't get everything, right?

Fast forward to Saturday, and it looks as though the Curlew Sandpiper might be sticking after all.  Lots of birders are out looking, and before long reports start coming in from Pike's Beach at Westhampton Dunes.   So dog-sitters are arranged and I jump in the car and run Out East, crawling through Saturday beach traffic to get to the site at around noon.  As I'm pulling in to the parking lot, Shaiba Mitra calls to say that the bird has moved and is being seen on a sand spit a little way along the beach, a fact confirmed by a returning party of successful birders that includes Tom Burke and Richard Fried among others.  So, while the last 15 minutes of the trip take an eternity, I eventually stomp up the beach, climb over a dune, and there it is, a beautiful dark red shorebird glowing against a background of white sand. 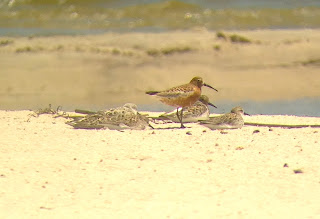 Grabbed a couple of quick iPhone pics really just for the record, then I have to rush back to the city to get back to dog-sitting duty.   Worth the trip though and a great year bird (#314).
Posted by Welsh Birder Abroad at 3:00 PM