While the three-day Spruce Grouse stake-out at Massawepie Mire was a bust (Snark Hunt?) there were a few consolation prizes, most notably my life Wood Turtle.  We were driving along a dirt road (I'm not going to share the exact location here) when we noticed a turtle standing in a tire track at the side of the road.  I assumed it was one of the nest-prospecting Painted or Snapping Turtles that we'd seen so many of that day but even a wing-mirror view made it pretty obvious that it was something different so I slammed on the brakes and ran back for a better look.  As I ran up, I have to say I was simply stunned to finally see a real live Wood Turtle just standing there; my first after 22 years in New York and birding and herping in the Northeast.  What a simply beautiful animal.

Took a couple of quick iPhone shots and was about to run back to the car to get the real camera when we heard another vehicle speeding along from the other direction.  Fearing for the turtle, and ourselves, I moved the turtle off the road and quickly ran back to move the car.  Should probably have gone back for better photos but didn't want to move the animal again, or disturb it too much. 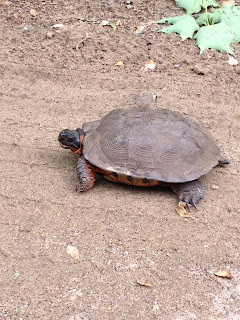 Its hard to believe that this species was once a common sight all across the Northeast and across New York State.  A victim of habitat fragmentation, and both professional and amateur collecting for the pet trade, the species has all but disappeared from most of its former range.  Wood Turtles are now considered endangered in New York and the DEC was thrilled to get this record.  Let's hope there's a good population hanging on in the area.
Posted by Welsh Birder Abroad at 4:00 PM