One of my toughest and yet, most rewarding birds of 2012 was the legendary Spruce Grouse.  A tiny, and declining population clings on in the central Adirondacks, very much isolated from their nearest neighbors in Vermont and Quebec.  I tried for this species on several occasions and, despite having some good local information, failed to find one on several trips.

So this was attempt number six for Spruce Grouse - my own personal New York State 'Snark Hunt'.  This time however,  I was feeling pretty confident, having lined up some expert help from some DEC biologists who'd taken pity on me after my long unsuccessful vigils at Massawepie Mire.  I slept in late after the previous night's failed search for Yellow Rails, so I didn't get to the Tupper Lake area until 8:30am, allowing time for a little birding before the meeting.  Best bird by far was a Philadelphia Vireo, which was a bit of a surprise, even though I knew they'd been reported in the area, but I also saw a Ruffed Grouse which caused a brief moment of excitement.  Soon enough though it was time to head off for my rendezvous.

When I arrived at the meeting place, there was a quick change of plans as my DEC friends, while driving over, had found a female grouse with 5 young on a nearby road.  Knowing how much I wanted to see the bird, they had thoughtfully, left someone behind to track the bird, while the others came to get me.  So within 2 minutes of arrival, the promise of a long day tracking down secretive grouse turned into a quick drive and "road-side" views of a Spruce Grouse family.  Why couldn't it be this easy the other five times I'd tried for this species?

While the birds initially stuck to dense cover, as they got used to our presence they came out on the the road and started feeding on the road-side.  Four of the young stuck to cover, and flew across the road when they crossed, while number 5 here confidently strutted across in front of us. 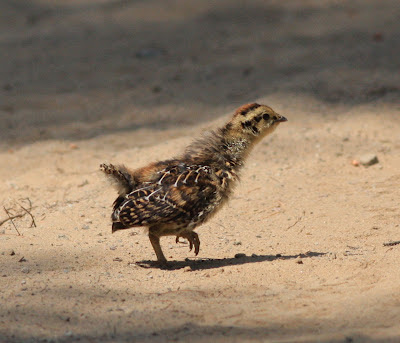 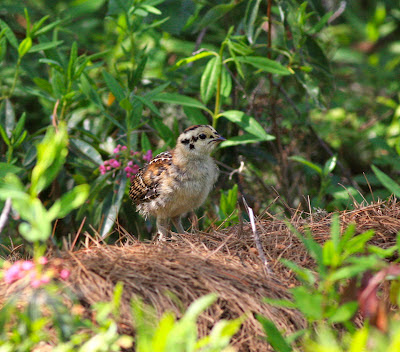 Took a ton of photographs and spent a half an hour watching the bird.  This was one of my key targets for the year; a bird that many New York birders don't have.  Well worth the time and effort. As a footnote: after I left, the biologists apparently captured the female and discovered that the bird had been captured and banded back in 2008, making her the oldest known bird in NYS.  With only 100 or so individuals left in the state, a proven breeder like this is a really important bird and it was a real privilege to see her.  Wishing the DEC the best of luck with their recovery plan.  It would be a huge loss to let this species go so hopefully the State's recovery plan can have an impact and keep the Spruce Grouse in New York.
Posted by Welsh Birder Abroad at 3:23 PM