Took a spin out to Mercer County, New Jersey today to look for a Crested Caracara that had been seen by many over the weekend.  There have been a few recent records in the NorthEast and, while everyone (rightly) debates the origin of these long-distance wanderers, I think the consensus is coming around to them being good birds.

Got to the site (a recently cut alfalfa field near West Windsor) by about 9am, only to hear that the bird had been seen well by many but was now out of sight.  The bird had apparently flown across the field and vanished behind a small 'ridge' not 15 minutes before I got there - 'you snooze, you loose'.  Sat and waited for a good three hours before getting antsy and heading off to drive nearby roads checking other alfalfa fields and open spaces.  Coming up empty I headed back to the original site and, as I rounded the corner, saw that the birders had all moved a quarter of a mile down the road and had scopes all focussed in the same direction!  Sure enough, the bird had flown out from behind the ridge not two minutes after I'd left. 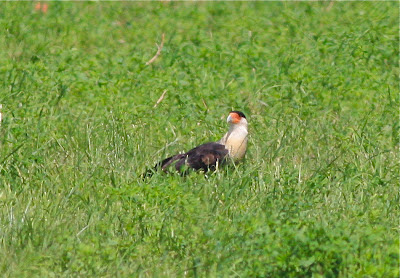 Got some distant shots and celebrated my second New Jersey State Bird of 2012 (after Brown Booby). Then I got greedy and tried to add the Elegant Tern at Sandy Hook on the way home; but no luck on the double for the day.  Still, a nice bird, and a change of (state and) scenery, so well worth the trip.