Spoon-billed Sandpiper on Long Island! Or not ...

So a full day on the shorebirds on Long Island on Thursday.  Started at Jones Beach S.P. and worked East with stops at Robert Moses S.P. and Heckscher S.P.  It was shaping up to be a pleasant day with nice looks at Buff-breasted Sandpipers and finally adding Stilt Sandpiper to my Suffolk County Year-List. 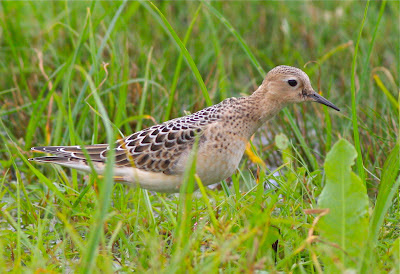 By early afternoon I was near Manorville and debating on whether to go to Cupsogue to look for Hudsonian Godwits (this Summer's bogey-bird) or to follow-up in reports on Baird's Sandpipers near Riverhead.  While I was getting lunch (and dithering) the phone rang and a very excited Derek Rogers came on the line.

"Are you Out East?"
"Sort of.  I'm near Manorville."
"Great.  Get over here now!  Someone just found a possible Spoon-billed Sandpiper."

So decision made, I headed over towards Sound Avenue North of Riverhead.  While I was driving I got a series of texts from Derek.  The bird 'didn't look right' he said (let alone that sod fields aren't exactly classic Spoon-billed Sandpiper habitat) and it had yellow in the bill.  Then a fuzzy, distant, photo of a bird that really didn't look all that promising.

Still, pulling up to the group of birders assembled along Sound Avenue, I jumped out and grabbed my scope.  'The Bird' was sitting, hunkered down among a group of Semipalmated Plover and we had to wait for a while to get a look at it.  But when it stood up and showed itself, it was pretty obvious that the bird, while odd, was not a Spoon-billed Sandpiper. 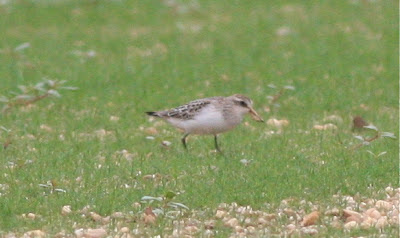 While the folks on the ground 'wanted to believe' (a Spoon-billed Sandpiper might well have been the best bird ever found in New York, maybe the US) the ID just didn't add up and everyone knew they were looking ant an oddity rather than a rarity.  The bill, while spatulate, flared from the base - more a duck-bill than a spoon-bill.  It was also a mostly yellow bill, as opposed to black.  If you discounted the bill, there wasn't all that much that was odd about the bird.  Basically a Semipalmated Sandpiper juvenile.  Jacob Drucker texted me for an opinion, and forced to make a decision, I came down on "SemiP with a radiation-assisted bill". 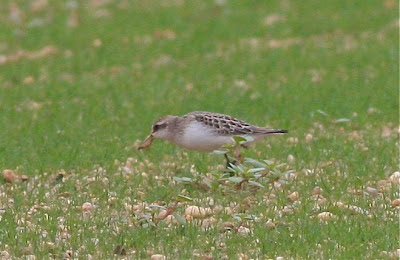 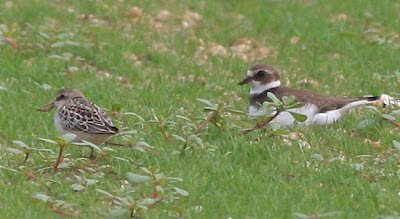 So reluctantly, the group of birders dispersed almost as quickly as it had assembled.  I sent a quick email to Shai Mitral and Angus Wilson with the negative news and also responded to emails from Peter Scully and a few others.  Then I, like everyone else, moved on and enjoyed great looks at a group of 20+ Buff-breasted Sandpipers along with a good mix of Baird's Sandpiper, White-rumped Sandpiper, Pectoral Sandpiper and American Golden Plovers.  By far the best and biggest group of Grasspipers I've ever seen.

What I didn't realize was that the negative news was not getting out and that some people were getting very stressed waiting for news on the bird and the ID.  When I got to East Hampton and posted some photos I walked straight into the controversy and I guess, in retrospect, I should have more broadly posted the negative news (although any of the 20 or so birders on site could have done so too).  So live and learn.  An interesting bird and a couple of moments of excitement in an otherwise quiet Summer bird wise.
Posted by Welsh Birder Abroad at 7:17 PM