We've had Summer Tanagers in, or near, our yard in Northwest Harbor for the last three Summers.  We know that they bred successfully last year as we saw young in and around the yard.  These birds are the only breeding Summer Tanagers in New York State right now - this species has been recorded potentially breeding on only a handful of occasions and it's normal range is way to the South of us.

This year however, we aren't so sure.  There was a male singing in late May / early June but it was singing from an area a little South of the yard and we haven't seen a female, let along young this year.  In fact, I've only seen a male a couple of times this Summer - for a brightly colored bird, they are remarkably good at hiding in the leafy oak canopy.  If it weren't for the load calls, we would never know that they birds were there.

This morning though, I got a break and heard a "chatter call" from the driveway while I was having coffee in the yard.  Grabbing my camera I ran around to the front of the house and saw the male high in an oak tree. 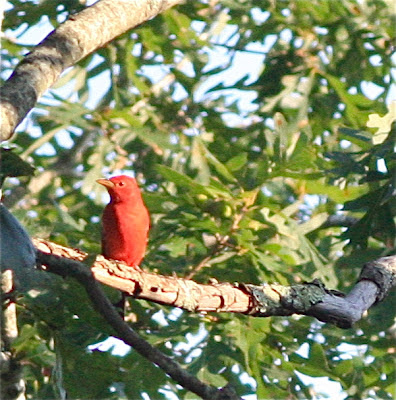 Not the best shot - it had to be heavily cropped to zoom in on what was not much more than a red spot in the original.  It was the first shot that I've managed to get in three years though, so happy to get some documentation for the record books.
Posted by Welsh Birder Abroad at 6:36 PM