A Full Saturday of Birding and Natural History in Singapore

After Tokyo, I took the long, late flight down to Singapore on Wednesday night, got settled at the ParkRoyal Hotel (very eco / green) and worked all day Thursday and Friday.  Saturday was a long-planned day off though and I'd arranged to meet local birding expert Lim Kim Chuah for a full day in the 'wilds' of the island.  Friday night, I met an old friend for dinner at the excellent National Kitchen restaurant and ate an excellent, and very local fish-head curry (how could I not order that when I saw it on the menu?).  I also drank a lot of cocktails - NEVER drink with Australians - so I set the alarm, then moved it to the other side of the hotel room so I'd be sure to get up.

5:30am and we were on our way to the Central Catchment Preserve, Singapore's only remaining tract of real forest, preserved to protect the watershed around the main reservoir.  We arrived at the trail head well before dawn and walked the mile or so in to the reservoir in complete darkness, hoping for owls, and we did in fact hear some - a couple of Brown Boobooks and a couple of Sunda Scops-Owls.   Both species were calling close to the trail but we never did get a look at either, and as dawn started to approach their voices were replaced with those of Great Racket-tailed Drongos, Ruddy Kingfisher and a bunch of Blue-winged Pittas.

As the light came up, we started to actually see birds, including a close view of one of the Pittas, and over the next couple of hours we had really solid tropical birding adding 41 species of forest birds. 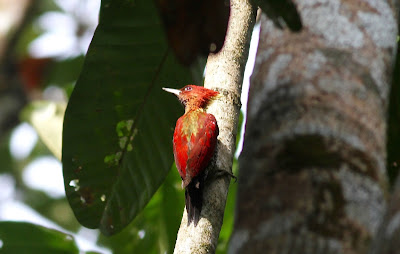 Next stop was the Sungie Buloh Wetland Preserve, a very well organized series of trails and boardwalks in a coastal mangrove area.  We were here to focus mostly on shorebirds, but they didn't really cooperate for us.  What we had here instead was a very cool general natural history experience.  The visit started with a specialty bird, a Copper-throated Sunbird and we also soon added a good mix of herons, egrets, kingfishers, etc.  I was personally much more into the mangrove habitat though and spent most of the visit photographing things you more usually only see on natural history TV show - Archer Fish, Mudskippers, Water Monitors and even 2 Estuarine Crocodiles (the "Saltwater" Crocodile of Steve Irwin / Crocodile Hunter fame). 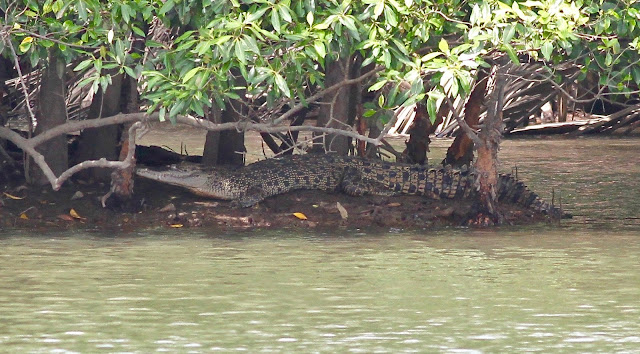 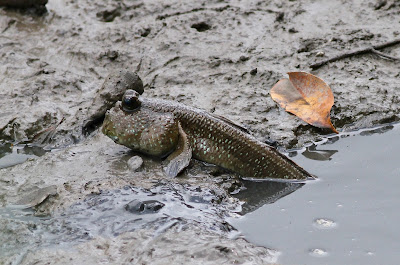 Tearing ourselves away from the mangroves we crossed back to the East side of the Island to look for a Spotted Wood-Owl, a life bird for me.  A juvenile owl had been roosting in Pasir Ris Park hopefully set up nicely for me to see along with a Buffy Fish-Owl that normally roosts in the same area (another potential lifer and a bird I'd missed several times before on Asia trips).  Two staked out life owls in one park, sounded like an awesome stop.

Trouble is ...... I have terrible karma with owls, I typically just don't find them.  Other people can walk through a forest and spot all sorts of roosting owls, I have trouble finding them even when I know where they are.  I have a theory that there is an 'owl-gene' ... some people have it, I don't.

So arriving at the park, we quickly racked up a decent list of good birds while heading to owl site number 1.  Thirty minutes later, with no sign of the owl, we gave up and tried for owl number 2 .... nada!  Another typical Welsh Birder dips owls scenario ... one I'm all too familiar with. 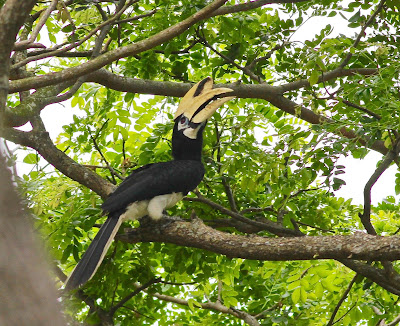 On the way back to the car we decided to give the Wood-Owl one more try and (and this really NEVER HAPPENS) this time I actually spotted the Spotted Wood-Owl.  Life bird!

Next stop .... Plovers!  Five Species of Plover in two quick stops (well four species and one upcoming split).  We picked up a Pacific Golden-Plover then added Malaysian Plover, Kentish Plover, Lesser Sand-Plover and a 'Swinhoe's Plover'.  This last form, the white-faced form of Kentish Plover seems destined for species status and so it was good to get one on my list just in case. 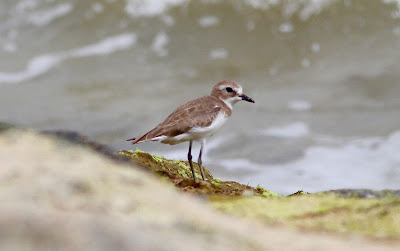 Running out of time, we had just enough energy for one more stop.  Kim Chuah had checked with friends and found the location of another roosting Buffy Fish-Owl so off we went for yet another attempt at this species.  We had spectacularly precise directions though so we quickly went to the Singapore Botanical Gardens, found the trail, found the vine that marked the roost, located the tree, and .... found the Buffy Fish-Owl.  Another life bird!

So exhausted, and very happy, with 88 species of bird and a host of other vertebrate species, I got dropped back at the hotel.  Great day!

Posted by Welsh Birder Abroad at 10:32 AM