A Quick Stolen Morning of Birding in the New Territories

I really hadn't planned to do any birding in Hong Kong.  I arrived late on Sunday night from Singapore and had a ton of meetings on Monday and Tuesday before flying back to New York on Wednesday.  When I looked more closely at the schedule though it looked like there might be a window to get some birds in on Wednesday morning between my early morning calls and my trip to the airport.  Needing some local expertise I reached out to some local guides but drew a total blank, then on Tuesday I got an email from John Allcock (local birding expert and eBird reviewer) ... his plans had fallen through and he could bird with me in the New Territories on Wednesday morning if I wanted to .... of course I wanted to!

Up at 3am for conference calls and then checked out of the hotel 5:30am.  The hotel was the very fancy Four Seasons, and I checked in as a business man but checked out as a bird bum (dressed in well worm, sweaty, dirty, birding cloths, that I'd worn in Singapore).  I also asked for a cab to an out of the way place in the New Territories rather than to the airport.  I suspect the hotel staff were a little confused.

Finding my way to Tai Po Station, and after a Starbucks breakfast (they serve real British-style Sausage Rolls in Starbucks in Hong Kong - awesome!) I managed to find John in the station parking lot and we were soon off to Tai Po Kau Nature Reserve for some early morning forest birding.

The reserve was a really neat piece of secondary forest - all the primary forest was apparently cut down during the Japanese occupation in World War 2 - and was a surprisingly positive story.  The forest is re-growing and the birds are apparently re-colonizing.  Many species have come back to Hong Kong, some natural re-arrivals and some no doubt helped by the local Buddhist tradition of buying and releasing song birds.  The weather was pretty grotty, and the birds were a little quite this morning but we did manage to get a small list of forest birds including a Pygmy Cupwing (formerly Pygmy Wren-Babbler) and a calling Chinese Barbet, a recent colonist and a life bird for me.

Next stop, with the rain easing off and the sun coming out, was the legendary Long Valley, an area of government-subsidized traditional farmland and paddy-fields.  This habitat is long gone from modern Hong Kong except in this small area where old ways are preserved, and it truly is a birding spectacle, quite literally stuffed with birds. 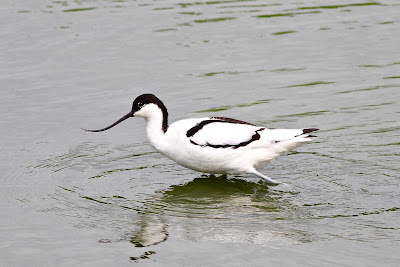 A mix of vegetable fields, paddy fields, ditches, and areas of fallow land really seem to be a really rich bird habitat.  Lots of shorebirds and a few herons filled the fields and a good mix of wintering passerines inhabited the field edges.  We saw 4 species of pipit (Olive-backed, Red-throated, Richard's, and American), Little Buntings, 2 types of Eastern Yellow Wagtails, lots of 'Stejneger's' Siberian Stonechats, and even a Chinese Blackbird.

On the shorebird front, there were lots of Wood Sandpipers, Common Snipe,  Little Ringed Plovers, Pied Avocets and Black-winged stilts (Marsh Poodles).  The shorebird I wanted to see here though was Greater Painted-Snipe, a life bird for me, and John (who had previously done research on this species) diligently worked the fallow fields until he found me some. 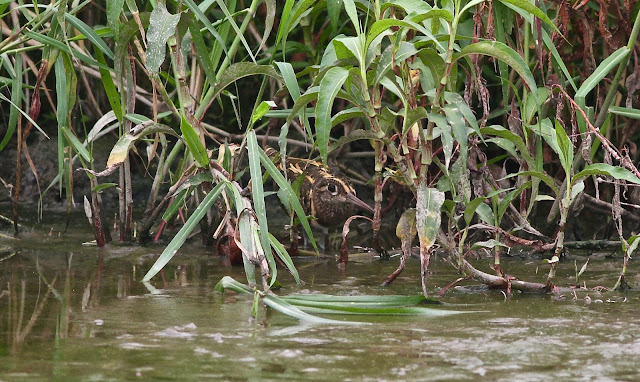 While we were talking (and birding) I mentioned that I still needed Black-faced Spoonbill and, still having a little time before I had to get to the airport, John suggested a quick stop at the Nam Sang Wai Wetlands to see if we could find some.

This stop turned out to be another very birdy spot with lots of shorebirds (Marsh Sandpipers, Spotted Redshank, Common Greenshank, Avocets, Stilts, etc.), herons, ducks, and an Eastern Marsh-Harrier.  But no Spoonbills ... and with time running out we admitted defeat and headed off to find me a taxi to take me to the airport.  As we left the area though I caught a glimpse of some white birds through small gap in the mangroves ... somehow they seemed wrong for egrets so I asked John to pull over and 'humor me'.  We waked back down the road and found a gap in the mangroves and .... Black-faced Spoonbills!  Life bird!  And a great way to end the trip .... 193 species of birds ... not bad for some stolen time on what was otherwise a trip characterized by busy days of meetings and busy nights of conference calls.  Got me thinking about what birds I can see on my next trip to Asia.

So trip over, I changed out of my stinky birding cloths on the roadside and put on clean cloths for my 16-hour flight to New York.  Figured I'd probably still smell bad but it wouldn't be obvious who smelled like a salt marsh if I changed my cloths.  Until next time Asia ...